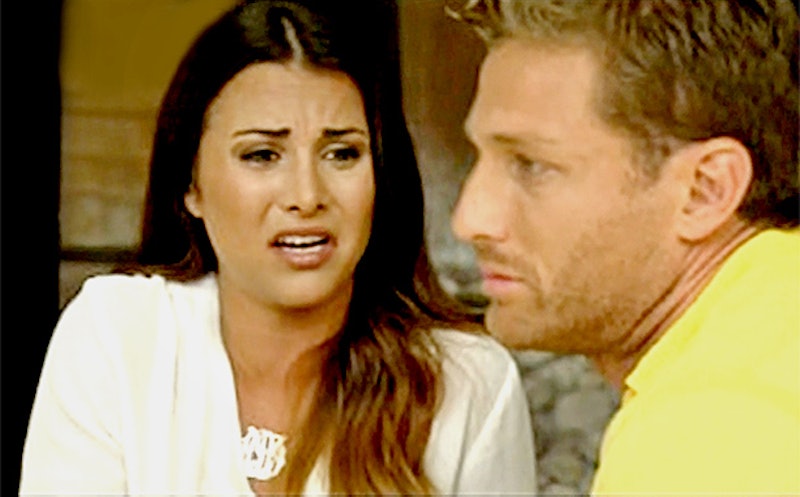 This has been a frustrating season for Bachelor fans. Juan Pablo Galavis did so many unlikeable things that the Bachelor family even started to turn on him. But all the feelings we've had watching the show were validated Tuesday night when final-three contestant Andi Dorfman channeled her inner all of us and told Juan Pablo what was up, and it was amazing. I was filled with glee watching her argue with JP, and not because it was the most dramatic episode in the show's history, but because everything I've been saying about JP for months was coming out of Andi's mouth and Juan Pablo was forced to listen.

I absolutely died when Andi told Juan Pablo he didn't know anything about her religion or political views, and he haughtily asked, "What's my religion?" in a lame attempt to show Andi that she didn't know anything either. Andi, without dropping a beat responded, "Catholic" and JP was mercifully rendered speechless.

So after suffering through this miserable season with the homophobic, slut-shaming Juan Pablo, let's celebrate last night by watching Andi say everything that's been on our minds since January.

SEEING JUAN PABLO BE A PLAYBOY WEEK AFTER WEEK

AFTER JUAN PABLO MADE HIS HOMOPHOBIC REMARKS

AFTER HE APOLOGIZED POORLY THE SECOND TIME

AFTER HE SLUT-SHAMED CLARE

LITERALLY EVERYTHING HE DOES

HOW WE FEEL ABOUT THE SHOW