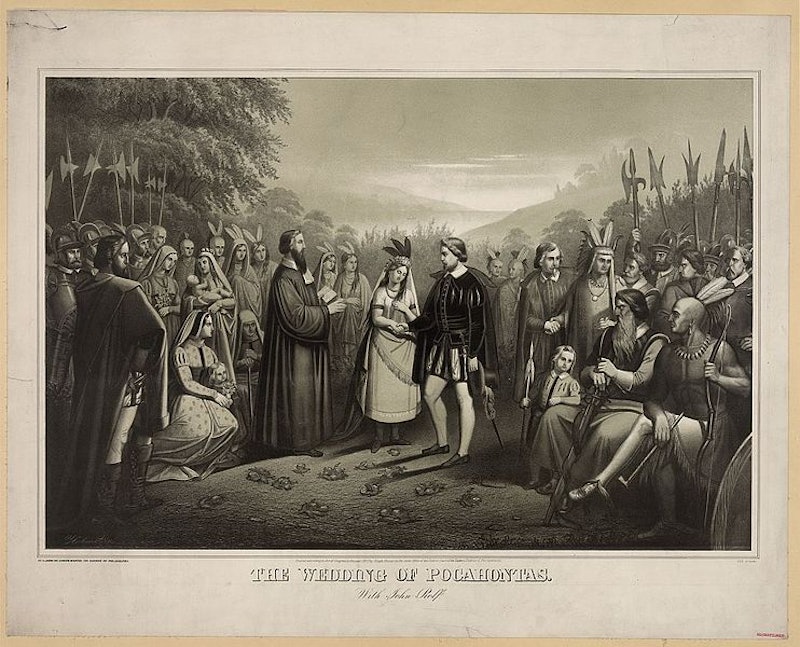 This Sunday, June 12, will be the 49th anniversary of the day the U.S. Supreme Court overturned interracial marriage bans in America, because of the case of Loving v Virginia. Throughout history, marriages between races have caused all sorts of issues among the narrow-minded and racist: in one of the judgements that led Loving v Virginia to go to the Supreme Court, a state justice voiced the opinion that "Almighty God created the races white, black, yellow, malay and red, and he placed them on separate continents. And, but for the interference with his arrangement, there would be no cause for such marriage. The fact that he separated the races shows that he did not intend for the races to mix." This sort of vile nonsense, unfortunately, has been the norm for much of history; but people have been defying convention (and, in many cases, law) to marry whomever they please and show that racism can't defeat love for a very long time.

Some of the interracial marriages on this list made history purely for being the first recorded ones of their kind, while others are important to remember because they broke barriers and overturned horrible conventions about "miscegenation." We are greatly fortunate to live in a time when interracial relationships are much more accepted, though we've still got a long way to go; it's important to remember that Kim Kardashian and Kanye West were the first interracial couple on the cover of Vogue in its 124-year history...and that only happened in 2014.

A lot of remarks have been made about the fitting name of the couple who stood up for the right to interracial marriage in America: the Lovings, Mildred and Richard, against the state of Virginia. The lawsuit conducted by the couple in the Supreme Court in 1967 overturned every law in America that prevented people from different races from marrying each other. Mildred and Richard were both from Virginia, and had travelled to Washington DC to get married in 1958. But Richard was sentenced to a year in prison when they returned home and were discovered; the sentence was commuted, but the couple were ordered to leave their home state for 25 years. After the 1967 landmark case, they lived in Virginia with their three children until Richard's death in 1975.

Arcadio Huang was an exceptional figure in the 17th century, a Chinese Christian convert born in Xinghua who was taken to France by missionaries, retired from religious life to become the King's Chinese interpreter, and produced some of the first academic work on Chinese-French lexicons (which are pictured). Somewhere in there, Huang, a famous society figure in Paris, married a Parisian woman named Marie-Claude Regnier; however, she died shortly after the birth of their daughter in 1715, and Arcadio followed in 1716. The reason this marriage is notable? It's one of the first interracial marriages ever recorded in Europe.

Sammy Davis Jr, the Rat Pack member and entertainer, was the focus of prejudice and even violence from others who had racist objections to his relationships more than once in his life. Before he married Swedish actress May Britt in 1960, he'd been in a very serious relationship with actress Kim Novak in 1958 — but studio chiefs allegedly ordered him beaten up to scare him away from her. Davis entered into a faux marriage with black singer Loray White to escape the racist rage. At the time of Davis's marriage to Britt, interracial marriage was still illegal in 31 U.S. states, and according to a 2014 book about Davis, written by daughter Tracey Davis, President Kennedy has Davis dropped from the list of performers at his inauguration due to this marriage to Britt, even though Davis had campaigned for Kennedy.

Seretse Khama, then prince of the Bamangwato people, met and married the British Ruth Williams in England in 1947 after meeting at a manor house dance. The marriage caused a gigantic scandal: Khama's people were outraged, as was the apartheid government of South Africa, which was located just south of the protectorate where the Bamangwato lived (it would later become Botswana).

Khama was recalled to Africa by his uncle, then the leader of the Bamangwato, who demanded he break up with his wife; he refused, and his uncle conceded the point. Unfortunately, South Africa also attempted to pressure England, which controlled the Bamangwato protectorate at the time, to force the end of the marriage. The British government proceeded to exile the Khamas from the protectorate in 1951 for five years.

It all ended (relatively) happily: the Bamangwato people sent a telegram to Queen Elizabeth II in 1956 demanding that Seretse, now their king, be allowed back. He was, and proceeded to be knighted, win the 1965 elections and rule Botswana as president for four terms. He and Ruth had four children, and she lived in Botswana after his death in 1980 until her own in 2002.