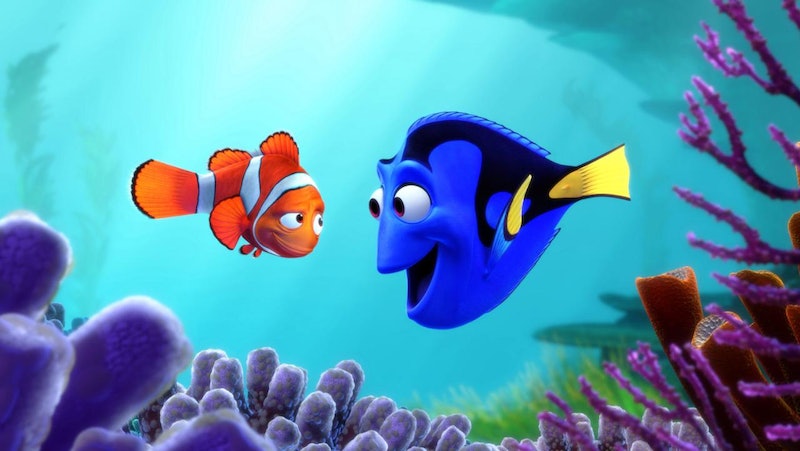 There's one scene in Disney/Pixar's upcoming underwater sequel Finding Dory that's been causing controversy. A few months ago, when a new trailer for the film hit the internet, audiences noticed two female characters walking together. They aren't kissing or even holding hands in the brief clip, but the internet erupted in wishful thinking: Could this be Pixar's first openly gay couple? Well, at the Los Angeles press conference for the film, director Andrew Stanton and producer Lindsey Collins addressed the possibility: "Our honest answer is: maybe," Collins says.

"We didn't ask them!" Collins and Stanton say in unison, joking that they did not speak to the fictional animated characters about their identities. Collins elaborates: "We don't sit there and ask everybody's background when we put them in our movie. If it was a main character I think we would know the answer to that question. It's not, it's just part of the world we see, so, maybe!"

Because this is seemingly the first time the interwebs have had such an explosive reaction to seeing two women paired together in a Pixar film, director Stanton thinks, "It's a reflection of the time, because there are a lot of [scenes] in our movies with two people of the same gender," he reasons. "We have no problem with whatever you want it to be. We honestly don't know."

The filmmakers' reasoning sort of makes sense: Surely there are dozens of smaller characters added to the various Pixar universes that don't get a backstory. But even if the creators of Finding Dory hadn't necessarily intended for these two women to be gay in their inception, why not now, when confronted with the question, make a game time decision, or rather, a declaration? With so many fans hopeful to see Pixar accepting same sex relationships on the big screen, deciding that these two women are in fact lesbians would speak volumes. After all, Pixar films contain messages of self-acceptance and acceptance of others. Finding Dory (and Finding Nemo, for that matter) certainly do.

But alas, same sex couples rarely appear in large budget, blockbuster films. As Variety's Ramin Setoodeh reports: "According to a study from GLAAD, only 22 of 126 studio releases last year featured characters that identified as LGBT."

The voice of Dory, Ellen DeGeneres, who is herself gay, was also asked if she thinks there is a gay couple in the film. "I don't know that there is, and I didn't know anything about it until I heard this rumor," she says. "When we watched the premiere last night I was looking for that particular scene, and it appears that there are two women, one women has a very bad short haircut..." she says, as the room erupts in laughter.

"If that's a gay woman then how dare you. Just because someone has a short, bad hair cut doesn't mean she's gay. Its just a bad haircut. So I don't know that that's the case, but I think if you see the movie several times, which I recommend, if you see it four or five times, there are some gay fish in the background. A lot of them look very gay to me."

Well there you have it. At the very least, there are, according to DeGeneres, gay fish in Finding Dory. But regardless of if the human women in question are romantically involved, DeGeneres thinks the fact that audiences are questioning their relationship at all is a great thing.

"Everything we see in the media, whether it's television or film — anything you see should represent everything that's happening in the world. I think everybody that is in the world should be seen and represented, so yes, it's a great conversation, and whether they intended it to be a woman with a bad short haircut being gay or not, I think it's a great thing."

And she's right. It's important that we are having this discourse. Maybe they are gay, and maybe they aren't, but we seem to be moving — or rather, swimming — in the right direction.