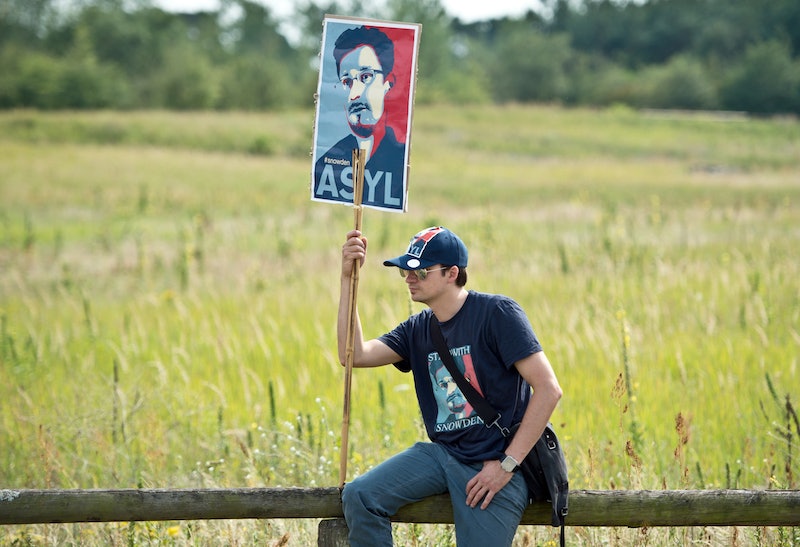 There may be a few thousand miles separating him from the political rumblings of Washington, D.C., but National Security Agency whistleblower Edward Snowden is clearly keeping himself informed on American politics. He's live-tweeted debates and served up scathing critiques of candidates on both sides of the aisle during the presidential primary. With the general election now underway (pretty much), Snowden, like many of us, has had to accept the reality of a November ballot battle between former Secretary of State Hillary Clinton and reality TV personality Donald Trump. Snowden captured many voters' opinion on the election in one tweet on Saturday.

"Politics: the art of convincing decent people to forget the lesser of two evils is also evil," Snowden tweeted. It was a perfect characterization of many voters' feelings on the state of the presidential election now that Clinton and Trump have been declared the presumptive nominees of the Democratic and Republican parties, respectively.

Snowden's tweet references the lesser of two evils principle, a common descriptor pulled out around election time to reflect the dissatisfaction some voters feel toward the remaining candidates on the ballot. The principle suggests that when faced with choosing between two less-than-stellar options, one should go with the least harmful (or evil) choice.

Although it's not 100 percent clear who Snowden would have preferred to see on November's ballot, he was heavily critical of Clinton's foreign and cybersecurity policies during a primary debate in December of last year. He's also had a few snarky critiques of Clinton's use of a private email server while working as the secretary of state. Snowden applauded Clinton's competition Sen. Bernie Sanders as being "more credible on foreign policy" than both Clinton and former Maryland Gov. Martin O'Malley during that December debate.

But don't count Snowden as a Trump fan just yet. The whistleblower has also been vocal in his criticisms of the presumptive Republican nominee. "It's very difficult to respond in a serious way to any statement that’s made by Donald Trump," Snowden told Al Jazeera in an interview last fall when asked how he felt about Trump calling him "a total traitor" and implying execution was a viable punishment for the whistleblower.

Saturday isn't the first time Snowden has sought to summarize his take on the 2016 political dog-and-pony show in 140 characters or less. When a win in South Carolina gave Clinton a notable delegate lead over Sanders, the former NSA contractor tweeted his dissatisfaction with both front-runners, writing, "2016: a choice between Donald Trump and Goldman Sachs." It was a thinly veiled reference to Clinton's economic ties to Wall Street.

Russia granted Snowden temporary asylum in 2013, and the controversial whistleblower has resided there ever since. Although he faces criminal charges in the United States for leaking classified information regarding global surveillance programs run by the NSA — two counts of violating the Espionage Act of 1917 and theft of government property — there's nothing to legally hinder Snowden from voting in presidential elections until he is convicted, according to his lawyer. The former NSA contractor has said he voted for a third-party candidate during the 2008 election, and given his presumed disregard for both Clinton and Trump, he might choose to do the same this year.

More like this
Prince William Condemns “Unacceptable” Comments Made To A Black Guest At Buckingham Palace
By Shahed Ezaydi
Matt Hancock Broke a Major Rule With I’m A Celeb
By El Hunt
What To Know About Martin Bashir After Watching 'The Crown'
By Bustle UK
'Waterloo Road' Is Back, With More Than A Few Familiar Faces
By Sam Ramsden and Vivian Iroanya
Get Even More From Bustle — Sign Up For The Newsletter