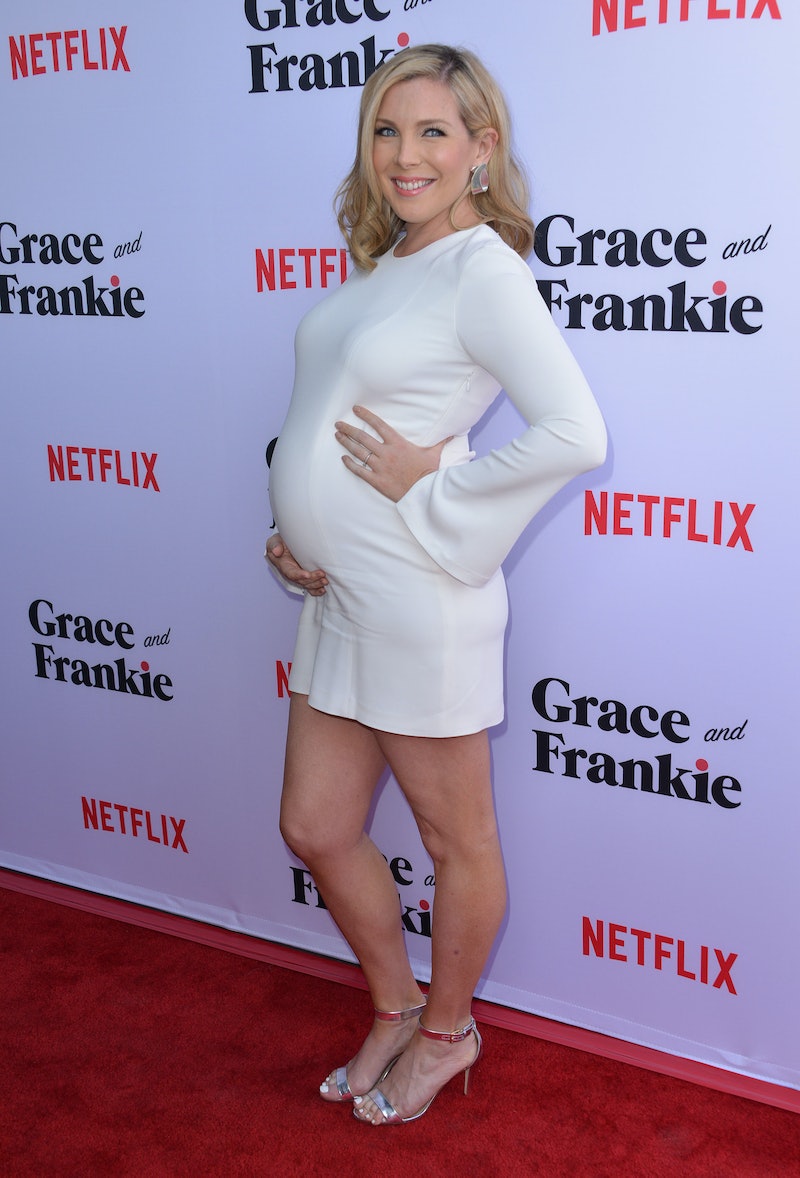 I have never been pregnant, but I can’t imagine pregnancy to be the most leisurely walk in the park, especially when photographers are catching your every move, every ice cream run, every not-so-flattering angle. Grace & Frankie star June Diane Raphael is amidst her second pregnancy in the public eye, and still, it hasn’t gotten any easier. In April 2014, Raphael gave birth to her first son with husband and fellow actor Paul Scheer, and now, while she’s expecting again, she speaks with Bustle about why pregnancy has been her biggest challenge since breaking into Hollywood thus far.

Female stars are, time and time and time again, praised for dropping baby weight so quickly and revealing their slim post-baby bodies. Look at this headline about how Kendra Wilkinson dropped her pregnancy weight after she “ballooned to 175 pounds” with her daughter Alijah. Or this one on how Halle Berry’s breastfeeding helped her shed pounds after giving birth. These are two of dozens, I imagine. Raphael can attest to how these headlines have personally affected her, causing her to have an up-and-down journey of motherhood as a celebrity.

“I don’t feel like I had a lot of women to look to in that regard, postpartum and dealing with the weight and seeing the reality of that,” she admits. “I just haven’t seen that very much. I certainly felt self-conscience about it. The first season of Grace & Frankie, I was very postpartum.”

The star opens up about the emotional struggles that come with the physical ones. “Going through the swings of weight loss and gain with pregnancies has been a challenge. I tried to put myself out there in a permanent way, not quite feeling my best,” the 36-year-old admits. As discouraging as this can be, though, Raphael says she’s learned to embrace her body’s transition during and after pregnancy. “It’s something I’m also proud of. It’s a very weird thing. I’m proud to be working and a parent. Yet I’m also like, I’m not quite myself yet.”

Thankfully, there have been celebrity moms who’ve opened up about the realities of pregnancy, such as Hayden Panettiere on her postpartum depression and Jessica Simpson on her struggles to lose baby weight. But we always see the before and after photos and stories, never the in-between. “I don’t think I ever thought about that, especially because you don’t see many actresses in their transitional phases postpartum,” Raphael explains. “They seem to lose so much weight so quickly. That just wasn’t my story. It’s not most women’s story.”

Raphael explains how important it is, mentally and physically, for women to come to terms with why gaining weight is vital and natural in the process. “I think that’s actually right and healthy and makes complete sense, there’s a biological reason why your body actually holds on to that weight more than any other weight you’ll ever gain, because it’s in the mode of, ‘I have to feed a baby,’” she says. “There’s actually some science behind it.”

Still, the actress has let these pressures get the best of her, and admits to feeling frustrated when the weight didn’t magically shed off, like what’s constantly highlighted in magazines. The hype of the Grace & Frankie debut didn’t help going through postpartum struggles, but only added pressure, as I would imagine it to. “It didn’t matter was I did, it just didn’t matter. [The weight] wasn’t coming off,” she says.

Thankfully, though, Raphael’s takeaway from her journey is one all women — who have had children, have yet to have children, or are surrounded by pregnant females — can benefit and learn from:

I’m a strong believer in [that] it takes nine months to put that weight on, give yourself nine months to take it off! Really 10. Or don’t take it off, I actually don’t care at all. But I definitely felt the pressure of that, [and] I didn’t have a lot of examples of this to look to.

It’s empowering for females, pregnant or not, to see this message and accept whatever phases their bodies may go through. Portrayals of female bodies on-and-off screen haven’t been realistic for quite some time which is why it’s imperative for women like Raphael to step out and bring the realities into the light, so other women will feel OK. And of course, like they’re not alone. I only hope more celebrities will be just as brave and follow her footsteps so we can all take care of our bodies and stop being so damn hard on ourselves for, really, no reason.