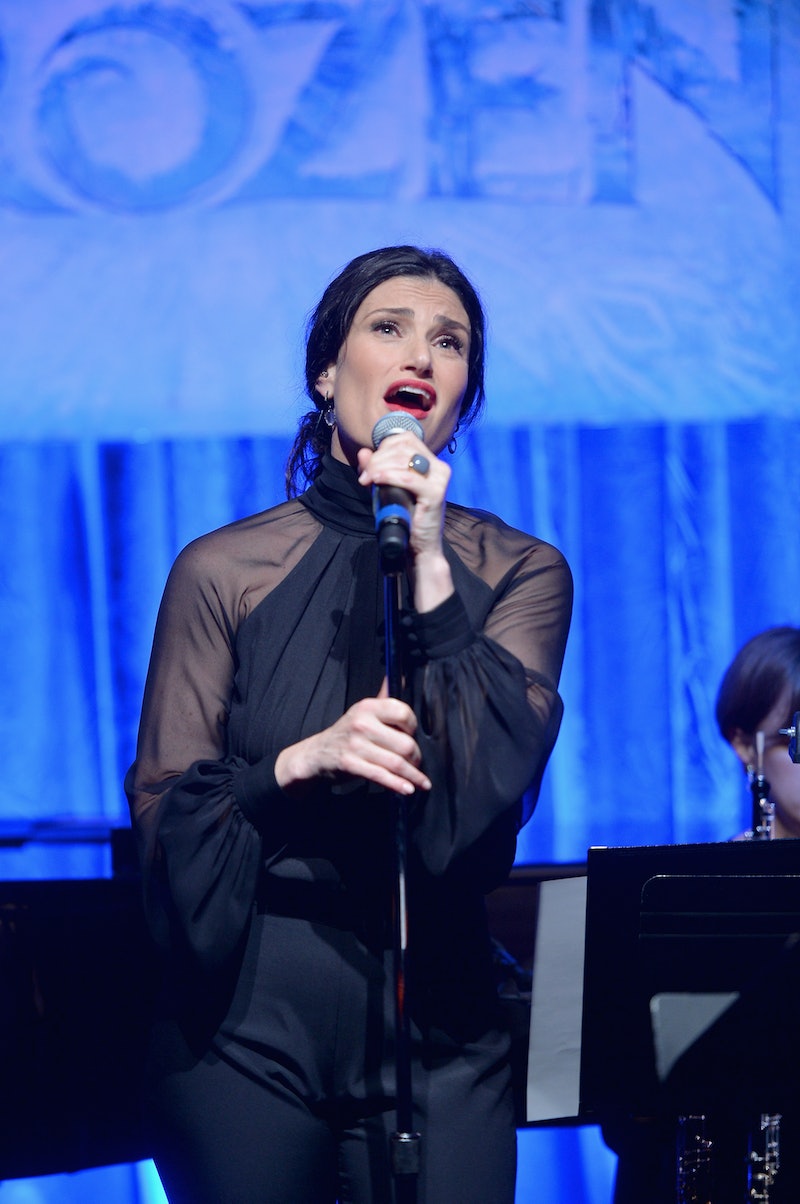 Everyone's favorite animated, female-empowered musical ever, Frozen , continues to break records three months after its release. The film has staked its rightful claim atop the Billboard charts for its fifth week as the number one soundtrack. This means that Frozen has spent the most weeks at number 1 for a soundtrack since Titanic, and that was nearly 16 years ago. So what does Frozen and Titanic have in common that other movies have lacked? Why was Frozen so damn popular?

Sure, Frozen was groundbreaking in a lot of crucial areas — it was feminist, funny, and had an overarching theme of independence and self awareness. What new age parent/kid wouldn't want to be an Anna or an Elsa, or even a Kristoff? But behind the amazing characters, there was also something distinct about Frozen: Power ballads.

That's right, ballads. Surely you've heard a ballad, right? Perhaps it seems like a hazy dream or a distant memory, but you were around for them. You sit and think, Ah yes! Once upon a faraway childhood memory I recall my mother clutching the steering wheel and screaming out the lyrics to "Unbreak My Heart." Now, while you become reacquainted with the Whitney Houston, Celine Dion, and Mariah Carey discographies, let us explain why ballads are the connecting thread in Frozen and Titanic's Billboard success.

Let's set something straight. Idina Menzel does not have a good voice. Idina Menzel has a great, booming, once in a generation voice. Her range, her delivery, and her power remind us of the greats, like, oh I don't know, Celine Dion? Dion, the same woman who sang the hauntingly beautiful ballad "My Heart Will Go On," on the, you guessed it, Titanic soundtrack.

Frozen's most popular song the soundtrack is undoubtedly, "Let It Go," which is, say it with me now, a ballad! Imagine that, a ballad leading a soundtrack to success. In the past decade, (and this is why you probably can't pick one from recent memory) ballads have all but disappeared from the Billboard Hot 100. In fact, from the years 2008 to 2013 there have only been five ballads that have made it to the Hot 100. FIVE. (A travesty, if we're being frank).

So why the resurgence in popularity? Has Frozen really sparked a "Bring Back the Ballads!" movement? It is possible. Everything that was once old is new again, friends, and it appears that Frozen appealed to the general public on a variety of levels and perhaps one of those levels was emotionally honest music sung by people with real talent.

With a rise in popularity with electronic music like Dubsteb and House, it's feasible that audiences are getting tired of synthesized beats and auto tune. Perhaps people are yearning for emotion once more. They're ready for impassioned lyrics and strong singers. Enter, Frozen.