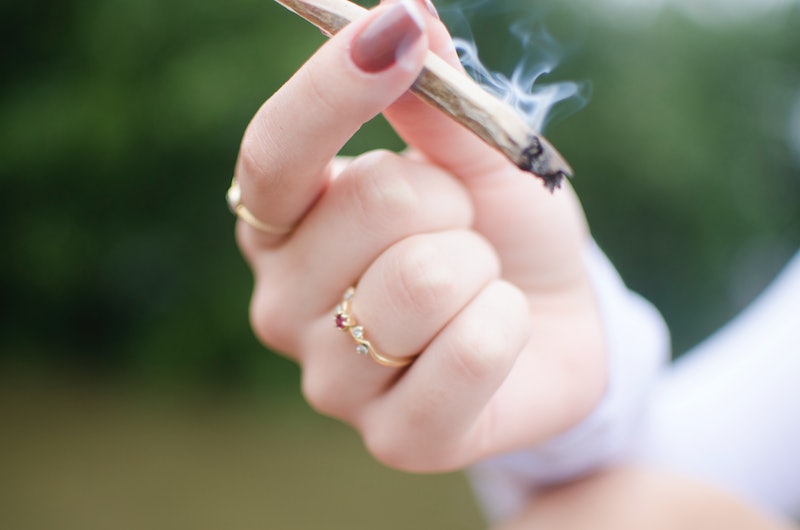 Marijuana is a substance that, just like alcohol, can be easily abused. Regardless of how good weed can be for you in certain circumstances, there are many people who end up self-medicating with it because they're battling underlying issues that actually have nothing to do with physical pain. Those with mental illnesses are especially susceptible to substance abuse, since they're dealing with issues that have never been treated. In 2014, 20.2 million Americans over the age of 18 struggled with substance abuse, and out of those, 7.9 million of them had a mental disorder. The two are inextricably linked.

Self-medicating can have serious consequences, especially because it's done without consulting a medical professional. A study published in the Archives of General Psychiatry found that people who self-medicate with alcohol or other drugs are likely to see an increase in social phobia as well as other substance use disorders. A harmful attachment to marijuana could also worsen the condition you've already got. In short, not much good can come of it. Don't waste any time to get help if you any of this sounds familiar.

That said, it's also important to note that weed can also serve as actual, legitimate medicine. Marijuana can potentially help with epilepsy, glaucoma, multiple sclerosis, and chronic pain. A 2006 study at the Scripps Research Institute found that THC, the active ingredient in marijuana, could slow down the progression of Alzheimer's disease by prohibiting the growth of the amyloid plaques that lead to Alzheimer's. Researchers at University of Toronto and Dalhousie University in Halifax surveyed 766 people from 2006 to 2010 who suffered from chronic nerve pain. In 15 out of 18 of their clinical trials, individuals who smoked marijuana found pain relief and were able to sleep better.

1. You Only Ever Smoke Alone

Nothing is wrong with toking up by yourself at the end of a long day, but it's a different story entirely if you exclusively smoke pot alone. In that case, getting high may have become a means of isolating yourself from others in an attempt to mask any pain you might be experiencing. Additionally, you're likely wrestling with intense feelings of guilt and shame about how often you're self-medicating, which only makes you want to smoke marijuana on your own more often, free of people's watching eyes.

2. Smoking Weed Is The First Thing You Do When You Feel Upset

If you consistently reach for marijuana every time you face a stressful situation or feel shaken up, that's a problem. Self-medication happens over an extended period of time, and it becomes a pattern that's extremely difficult to break. It's time to seek help if you smoke pot every time you feel depressed, anxious, mad, or angry. These are the kind of uncomfortable emotions that drive people to substances when they have no other outlet to express themselves.

3. You Feel Worse After The High Wears Off

At first, it may seem like the only thing that helps you feel better is pot. It's temporary relief from the worrisome reel flashing around in your head. But the very nature of self-medicating means that your physical and mental health will suffer in the long run because you're not giving your body what it truly needs. So take it as a warning sign if you feel worse after you sober up than you did before you got high. You may actually find that your emotions are more acute and stronger than they were earlier, driving you to reach for more marijuana in order to feel better, even if only temporarily. It can feel like a vicious cycle.

4. You Get Irritable If You Don't Smoke

When you get used to weed alleviating your problems, you'll likely feel out of control if you don't have it at your fingertips when you start to feel stressed. If you notice that your mood visibly changes when you don't get the chance to smoke in the situations you normally do, you might want to take a serious look at your marijuana use. Self-medicating leaves people feeling vulnerable if they don't have their fix right then and there, and it can result in irritable behavior.

5. You Smoke Much More Than The Average Person

Are you smoking heavily at odd hours of the day? Are you purchasing so much weed on a regular basis that your finances are suffering? As soon as you feel like you've crossed the line into a reliance on marijuana, you should think about opening up to a professional.

6. You Do Things High That You're Not Proud Of

People who are self-medicating tend to go overboard with how much marijuana they smoke in one given time, and that can easily result in conduct they may regret later. Dr. Tian Dayton, a clinical psychologist, wrote for Huffington Post about people who self-medicate. She says they "increasingly depend more and more on a substance to change their mood." As a result, "their relationship with that substance comes to have a life of its own." Maybe you say something inappropriate in public to a stranger, or you have a big fight with your best friend over something miniscule. As innocent as your marijuana use may have started, it's evolved to something dangerous if you've regularly gotten to this point.

7. Your Friends And Family Have Said Something To You About Your Marijuana Use

Nosy distant family members aside, the people you've known most of your life know you well, which means they probably know when something isn't right. It may be a tall order, but don't ignore your friends and family if they've told you several times that they're worried about your behavior. The hardest part of recovering from your self-medicating is to reach out for help. The good news, though, is that your loved ones have already shown that they care for you by speaking up about your habits, so they'll be there for you when you're ready to get help.

8. You Think About Having It All The Time

If you feel anxious and worried when you can't toke up exactly when you want, you've probably got an unhealthy relationship with marijuana that prevents you from living out your life normally. Even though marijuana is a substance that has a very low rate of addiction — only one out of every 10 people will battle an addiction — you can still mentally rely on it to get you through certain everyday scenarios. And that's when you know things have gone south in your relationship with pot.

As awkward as it might seem at first, try to talk to someone about what you're going through. There's always someone out there who's willing to listen.