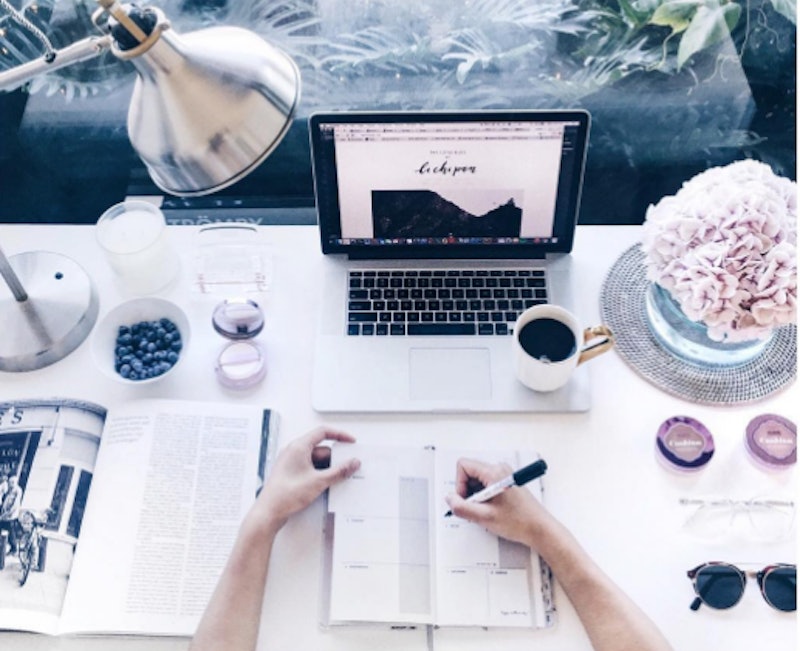 How awful is it to get things done when you don't feel like it? I know the scene well: You're lying on the couch all sloth-like, running through the to-do list in your head and getting nervous over the amount of things you still haven't started on. But do you move? No. Do you, instead, pick up the remote on the other side of the couch with your feet? Possibly. It's a crazy cycle to be stuck in. You want to be productive and kick-ass and get all these amazing projects started and ambitions check marked, but somehow you just can't muster to catch that spark you need to set it all into motion. All you need is just that little light of fire that will get you moving in your slippers, and towards the potential you know is avalanched underneath your excuses and "maybe tomorrow"s.

But here's the thing: You don't need that spark. Forget the burst of inspiration or the muse you think will invite herself over for a quick cup of coffee, and instead settle on the fact that becoming a boss doesn't have such romantic beginnings. Instead, all it takes is wading into those ambitions and to-dos organized in a numerical list, and getting started. Below are 11 ways to get things done when you just don't wanna. Roll up your sleeves, people. We're about to do this.

1. Think Of The End Goal

When I find myself jumping from foot to foot like a boxer, trying to amp myself up to start a task but already reclining into the lady-of-leisure position on my couch, I stop and put the task into perspective. Why is it important that I get it done? What's in it for me? Productivity coach Chris Bailey from self development site A Life of Productivity pointed out, "When you zoom out from a task you’re working on and think about how it fits into the bigger picture of your life, you can see at a higher vantage point why it’s important that you get it done." Walk through the important domino effect of finally doing that activity, and you'll walk yourself over back to your desk.

2. Focus On Only What You Can Control

Rather than worrying about the end results of the finished product, take the pressure off by only focusing on what you can control. Lifestyle writer Charley Mendoza from lifestyle site Keep Inspiring Me offered, "For your work, your circle of influence is limited to your hard work and attention to details. The results, whether your boss likes what you do or not, is out of your control so don’t dwell on it." Let yourself go into tunnel vision; it'll take away a lot of unnecessary worry and pressure.

3. Start With The Most Loathed Bits First

As much as you try to convince yourself that you'll start that project that's been hanging out in your inbox for weeks now at the end of the day, we both know that's a bold-faced lie. But it's not necessarily your fault — willpower isn't exactly a currency that runs deep. Lifestyle writer KW Stout from self-development site Pick the Brain explained, "You slowly spend your daily budget of willpower as you go about your day. As a result, our willpower is strongest in the morning and weakest at night." Use that knowledge to your advantage and do the parts of your to-do list that make you cringe, first. Get it out of the way when your willpower is plenty, and then you won't be as likely to ignore the rest of the list as the day wears on.

4. Work Out What You're Afraid Of

When I take my sweet time to start on a new project, I like to cut through all the excuses and airs and instead pinpoint what the real reason is for the hesitance. Small business writer Melyssa Griffin pointed out, "What’s really holding you back from doing your work? Fear of how long it will take? Too much pride about not being able to deliver something spectacular enough? The answer might reveal a whole lot!" Once you acknowledge it, you can work past it.

5. Accept That You Hate It

This might sound funny, but instead of wasting energy dodging the fact that you don't wanna and coming up with excuses for why you can't start (um, I need to water my basil pot! I have to clean out my sock drawer!,) just admit you hate it. Admit you don't want to, take a deep sigh, roll your eyes, and then plop down and do it with a scowl. Lifestyle writer Henrik Edberg from self-development site Positivity Blog offered, "This sounds counterintuitive and perhaps like you’re giving up. However by accepting how you feel instead of resisting it you reduce the emotional energy that you are feeding into this problem." Don't waste time pretending.

Rather than grumbling over how you hate this and how you won't do a good job of it anyway, switch the self-talk in your head into a rousing pep talk. Grab your pom poms and instead fall into a series of C-Jumps and high kicks over how you're going to totally kick this task's butt. Bailey recommended, "As an experiment, the next time you find yourself putting off work, pay attention to what you say to yourself in your head. If you find yourself saying a lot of things like, 'I can’t do this,' 'I’m no good at this,' and 'Why can’t I just stop wasting time,' you’re probably only making things worse." Make that simple change.

Mendoza helpfully pointed out, "Your brain is wired to avoid pain and seek rewards at all costs, so you can’t convince yourself to do things by thinking, “Next time, I’ll wake up early so I’ll have time to do X.” If you actually had the willpower to do it, you wouldn’t wait ‘til tomorrow in the first place!" So if it's rewards your brain wants, offer them up. By finishing one task on the to-do list, promise yourself a treat. Whether that's a fancy coffee or lunch at your favorite spot is up to you.

8. Figure Out When You're Most Productive

Once about 6 p.m. hits, I'm completely and totally useless to the world. If you put a laptop in front of me and told me to get to work, I'd melt off of the couch and onto the floor like a cranky three year old. There's just no way. But first thing in the morning? I could probably run the UN while bangin' out killer articles. Know your peek hours. Griffin recommended, "Figure out when you feel and work your best and then do all of the things that take the most brain power during those times." Then save your mindless, house-keeping tasks for those low-energy hours.

Rather than just biting down on the negatives, list out what opportunities are waiting on the other side of the finish line. Edberg pointed out, "Making a list of positives like benefits and possible opportunities can be very effective for turning your focus around." Can you add it to your portfolio? Will it push you forward in your career? Let you polish a skill? Focus on that instead.

That's right, pick your jaw up off of the floor. I just recommended you do a bad job of what you're putting off — mainly because a bad job is better than no job. And when the pressure is off of making it gleam with perfection in the end, magic tends to happen. Bailey explained, "Since I’m the only person who will ever see the original version of whatever I’m working on, after I give myself permission to create crap, I always come up with better ideas than if I had waited for a good idea to come along." Concede to this idea: A first draft isn't the final draft. Just start it!

When I think of a project that's been hovering on my to-do list for weeks now, I start to wring my hands. I feel like it's this big, angry shadow that's towering above me. But instead of going with the notion I'll work on it for the next 11 hours of my day because oh-my-god-I've-waited-so-flippin-long-to-start, I tell myself I'll just do it for 10 minutes. Bailey gave an example, saying, "if you need to work on a report but you’re simply not feeling it, shrink how long you’ll work on the report until you no longer feel resistance to it." Ten minutes ain't a thang, and chances are you'll get sucked into it and work on it for longer.