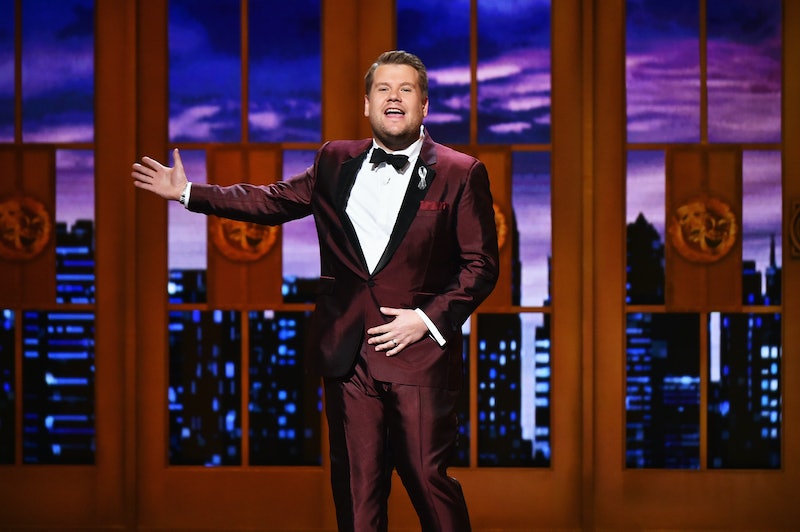 James Corden's Carpool Karaoke segment on The Late Late Show undoubtedly a lot of fun. The most recent addition, Broadway Carpool Karaoke, wouldn't have 8 million YouTube views if that weren't the case. We get to watch some of our favorite performers jam out in a car, and I can actually think of few things more entertaining than that. But there's one question I always find myself wondering during the bit: is James Corden really driving on Carpool Karaoke? One would hope not, because, though I may or may not have failed my drivers test three times (may), I'm pretty sure hosting a segment for television while driving is frowned upon by the Department of Motor Vehicles.

In a Yahoo Style interview the night of the illustrious Tony awards, Jane Krakowski admitted that nope, that is no green screen or fake car. Corden is actually driving. In fact, she claimed, "We drove around a few block in midtown Manhattan, over and over again. James Cordon is really driving — he’s a very good driver! — and we’re all strapped in. And he’s very strict about that." I mean, people sing in the car all the time so this isn't really that big of a deal, I guess.

Krakowski also revealed that "they put cameras all over the car, and all over the periphery of the windows. You can’t not be looking at a camera, to be honest," so its not like Corden has to focus on anything but singing, driving, and talking to famous people — all things he seems to do effortlessly. Furthermore, if he's just driving around the block, how bad can it be? It's not like he's taking these celebrities on a cross country journey through unfamiliar territory.

And yet, still, every time his hands dance away from the 10 o'clock and 2 o'clock as a gut-punching part of the song comes up, my heart does a little terrified jump. Or when Lin- Manuel Miranda grabbed his hand in preparation for "One Day More" demanding Corden, "Just drive." Though they were stopped at a light, I was certain things would end in a similar fiery blast to the Thelma and Louise one they were referencing. I worry about driving safety, OK?

Seat belts or not, safe driving or not, the anxiety of watching Corden and company sing and drive will always be a little scary. But it will also always be entertaining enough to make up for the fear. Long live Carpool Karaoke.

More like this
Beyoncé Just Announced Tour Dates: Here's How To Cuff Tickets To Her 2023 Shows
By Jake Viswanath
Cardi B, Olivia Rodrigo & More Will Present At The 2023 Grammys
By Jake Viswanath
Lizzo Scares Herself Meeting Her Madame Tussauds Wax Figures In A TikTok Video
By Alyssa Lapid
Jameela Jamil Defends Sam Smith After Trolls Body-Shamed Them
By Jake Viswanath
Get Even More From Bustle — Sign Up For The Newsletter
From hair trends to relationship advice, our daily newsletter has everything you need to sound like a person who’s on TikTok, even if you aren’t.