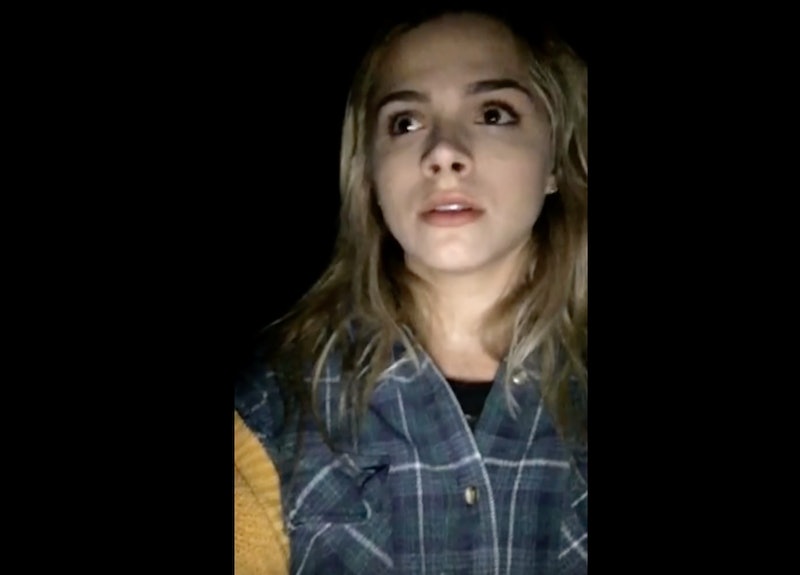 Are you getting a bit overloaded with found-footage films? Is the novelty wearing thin for the once-revolutionary genre? Well, I'm here to tell you that found-footage just got interesting again thanks to Sickhouse , a film composed entirely of Snapchats. That's right: a horror film made entirely of Snapchats exists and it's equal parts brilliant, fun, and scary as anything. Could Snapchat or similar social media platforms (think Periscope or even Instagram) be the way forward for film? Or is it simply a gimmick to attract more viewers?

While Sickhouse has the superlative of "first movie made entirely on Snapchat," it's certainly not the first time the social media platform has been repurposed. Ingrid Michaelson used Snapchat to create the music video for her single "Hell No" back in April. The video was inventive and snappy, allowing viewers to enjoy the song while watching a creative medium's boundaries get pushed. When I first saw it, I began to wonder if there was a logical way to expand Snapchat's use into a short or feature-length film. It looks like director Hannah Macpherson answers that question perfectly with Sickhouse, pushing what's possible with the platform in a way we wouldn't necessarily equate with feature-length filmmaking possibilities.

If you've seen Paranormal Activity, The Blair Witch Project, Cloverfield or any other film shot in a first-person, shaky-cam aesthetic, then you're familiar with what the found-footage methodology allows for. Since The Blair Witch Project debuted in 1999, found-footage films have been a booming genre. Not only do they work well with horror when it comes to jump scares but found-footage works in making the reveal of the big bad that feels like it's actually real or even working as a parallel to our impulse to film our daily lives.

These aspects of found-footages are perfectly capitalized on in Sickhouse. Real life gets its own commentary with Youtube star Andrea Russett playing a version of herself in the film. Sickhouse was also uploaded to Russett's Snapchat in real time, not only making Russett's followers the beta-testers for the film's potential success but also making Sickhouse into an extra-meta version of a found-footage film. The Snapchat format only serves to enhance those jump scares and creep-out moments because of the length of time of a Snapchat video as well as the in media res feeling you get from clicking on a video. There's little time to prepare for what's going to show up and the action moves quickly when the horror kicks in; the Snapchat format enhances that creep factor.

What Sickhouse presents to us is the possibilities for horror films in the future. While Snapchat may not have been initially created to serve as a way to create a feature-length film, Sickhouse opens up that gateway. Are the scares lessened because of the format? Heck no. If anything, the scares are more intense. If ever a film genre got a much deserved boost, then that genre is horror and the boost? Social media. Watch the trailer and see if you agree with my feeling that Snapchat and horror go together like peanut butter and jelly.