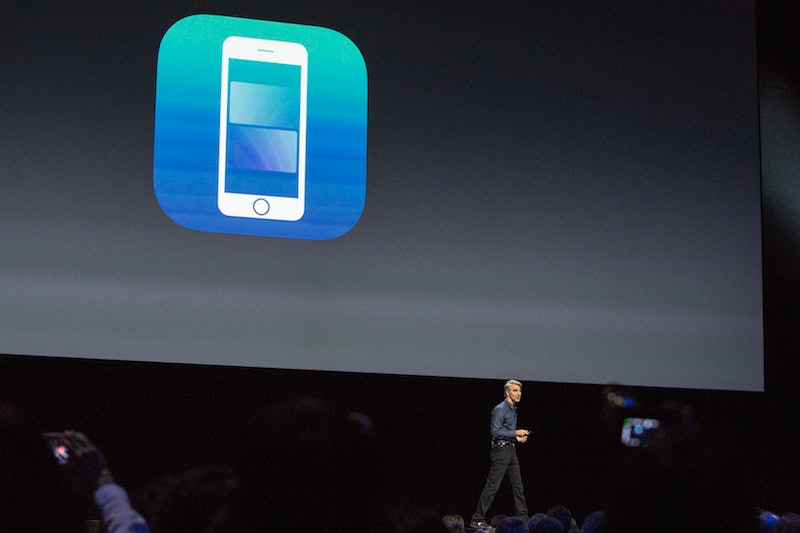 At the Apple Worldwide Developers Conference on Monday, Apple announced a number of upgrades to various devices, including Mac desktop and Apple TV. Several of the upgrades being made to Apple iMessages may be exciting for users, particularly those who love to get creative with their texts beyond the strictly verbal. Apple's iMessages will now have stickers, similar to Facebook, so you can more easily add gifs to your messages.

Stickers have been available for use in texts for a while now, but only through separate apps. Apple is integrating stickers into iMessages so that it will be easier to add them to texts from right within the app. We don't know yet what the full spectrum of sticker themes will be, but Apple Insider reported that Monday's conference featured a demonstration with Disney-themed stickers, giving us just a little taste of what's in store. This is great news for those texters out there who feel they just can't adequately convey themselves without a dancing Mickey Mouse gif.

Sticker integration is just one of the image-related upgrades that Apple revealed on Monday. TechCrunch reported that the new iMessages features "emojification" — the app highlights words that have an emoji linked to them, and gives users the option of replacing the word with the emoji with a finger tap.

Another interesting change coming to iMessages is that users can select the shape of the "bubble," or the box in which their text appears. This feature could be used to alter the tone of different messages, making them appear "louder" or "quieter" depending on the sender's intent.

The iMessages updates announced on Monday do more than just let texters add color to their messages — they change what you can send. Texters will be able to send each other videos and music that can be played within their conversation. You'll also be able to send friends money through Square Pay within iMessages. Perhaps one of the most exciting features for those who love texting and take-out alike is the inbuilt DoorDash app, where a number of texters collaborate to order food together.

The upgraded iMessages will allow iPhone users to more easily incorporate images into their texts, and will let them do more than they could previously from within the stock app. With all the new options, just try not to use so many images that you forget how to use your words.