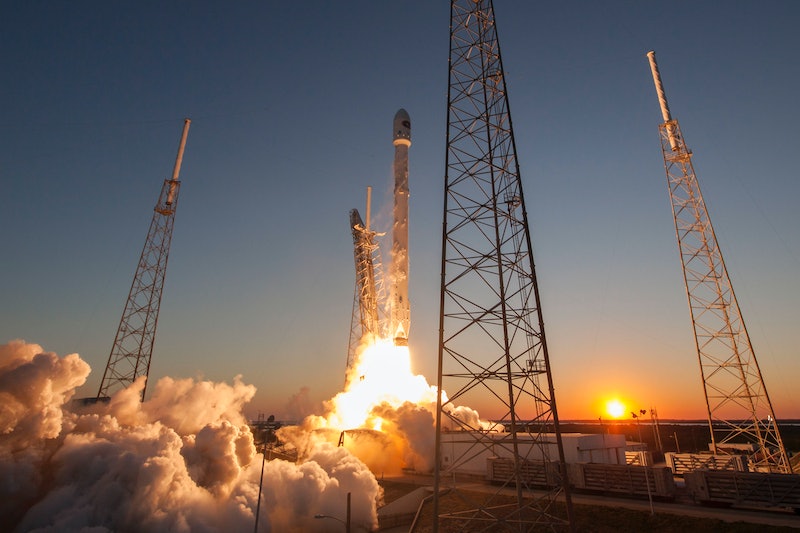 In general, we only hear news about what's happening in space when something massive has just been done or discovered: when a space craft is launched, for instance, or an astronaut becomes a worldwide star. (Hi, Tim Peake!) But the reality of space flight and the human exploration of far-flung areas of the galaxy is that exciting moments and discoveries happen all the time; they're just not as spectacular or bizarre enough to make major headlined. Right now, for instance, there are a bunch of scientists in a Utah research facility pretending they're on Mars, and a gigantic rocket is being super-cooled to make sure it can withstand temperature extremes when it comes to lift-off. If you don't think that's cool, I can't help you.

The future of space exploration and how we understand the universe is changing. Alongside more "traditional" spacecraft with astronauts aboard, we're now researching tiny devices that might ride to distant galaxies on beams of light, and robots that could build a map of the universe that stretches back to its beginnings. Our relationship to the science of space is rarely linear; it's often better understood as a lot of exciting things happening at once, which occasionally come together to produce one gigantic breakthrough or disappointment. And this doesn't even get into new ideas about dark matter or the realities of black holes.

Life on Earth can feel pretty terrible right now; so let's all focus on the stars for a short while and try to envisage something more hopeful, shall we?

1. The Mars Rover Is Still Getting It Done

You may not have thought much about the Mars Rover since its spectacular landing on the surface of the planet in 2012, but it's still trundling around, analyzing Martian rocks and mud. The most recent news from the little robot is that it's analyzed its 12th sample from the bedrock of the red planet, and it's now headed for a mountain, Mount Sharp, after months poking about on Martian plateaus. The big mission on the mountain, according to NASA, is "investigating how and when the habitable ancient conditions known from the mission's earlier findings evolved into conditions drier and less favorable for life;" how, in other words, Mars became a dry, inhospitable planet. It also takes selfies, if that's your thing.

2. NASA Is Having A Summit About Gender Equality

This is cool news — particularly because the recent birthday of Sally Ride (above), first American female astronaut in space, highlighted how recently the glass ceiling of gender in astronautics was broken. NASA is hosting a summit of talks with the White House on June 15, this Wednesday, to talk about gender inequality in STEM in general (that's science, technology, engineering and mathematics) and brainstorm strategies to get girls and women interested in STEM careers. If you're interested (as I really am), the event, which is called Engaging Women and Girls in STEM through Data Science, will actually be live streamed on NASA's website; Bustle will bring you all the coolest stuff they discuss.

Even the most scientifically unaware person has likely heard of Professor Stephen Hawking, who is doubtless the most famous scientist and mathematician currently living. (Eddie Redmayne won an Oscar for playing him in Theory Of Everything, if you need a pop culture reference). And, in some of the most exciting news in space exploration in decades, he's become physically involved in the pursuit of new worlds. He's teamed up with Mark Zuckerberg and the Russian billionaire Yuri Milner to create Operation Starshot, a project involving nano-spacecraft tinier than any ever produced, weighing less than one gram each. The nano-craft, announced in early 2016, will "sail" on Earth-produced laser beams to other star systems at huge speeds.

The purpose of the nano-crafts' investigations? To look for alien life, and see if other planets are habitable for humans. It's an incredibly exciting new age.

4. "Promising" Earth-Like Worlds Have Been Found

If Hawking's hopes for the future of miniature spacecraft are fulfilled, they may find certain worlds are already marked for exploration as possible homes for humans and similar life forms. It was announced on May 2 that some very promising planets had been found a mere 40 light years from Earth: three planets surrounding the star TRAPPIST-1, an ultra-cool dwarf star. All three planets are around the size of Earth, and it seems they're within a "habitable zone" of radiation around their star. We're still not entirely sure about their atmospheres, whether they have water, or if any parts of them are too exposed or freezing to support life; but it's massively exciting to have a possibly habitable world so close to Earth, and easily observed by telescopes.

5. The World's Most Powerful Rocket Is Being Tested For Space Flight In 2018

If you're a tech geek, this will excite you: temperature testing is currently taking place on the booster rockets for the ORION, the first new spacecraft NASA's built in decades. ORION's meant to be the future of manned space flight, taking humans further into space than has ever previously been achieved, though its maiden flight in 2018 will only take it 3,600 miles from Earth on two orbits. Prep is well underway: the launch rocket for the ORION, which is the world's most powerful, is being tested this month at extreme temperatures to make sure it still functions properly. This is its final test before it's launched in 2018, so expect headlines if it doesn't manage to make the cut...

6. NASA's Gathering Allies For Its First Manned Trip To Mars

A man on Mars is still definitely on the horizon for human space exploration, and NASA has been making alliances to make it happen, including a slightly unusual one this week: the United Arab Emirates. The UAE has exactly no history of space exploration, but it's got a lot of resources it's willing to pour into the future of space travel, particularly Mars, and NASA is keen to get as much shared data and funding as it possibly can. A mission to Mars may likely be a worldwide effort.

There's also training happening for the astronauts who may take the trip to the Red Planet some day, hopefully with a little more success than Matt Damon in The Martian. It turns out that the Mars Society actually built a simulated training environment in the deserts of Utah in 2002, and has been conducting explorations of flora and fauna in the same way they would in space. They produced a bunch of their findings this year, including the revelation that they make researchers on-site wear "space suits" so they can train for space-like research conditions.

7. We Might Have A Universe Map Made By 5000 Galaxy-Seeking Robots

Telescopes are more powerful than ever, and a new kind, the DESI (Dark Energy Spectroscopic Instrument), is shaping up to make the thing you tilted to the sky as a kid look horrifically old-fashioned. DESI will be made up of 5000 tiny robots focussing at one point in the night sky at a time, in the hopes of creating the most detailed 3D map of the universe ever created. They're going to be programmed to seek out galaxies and fix on them, then select another one a few hours later; the key, apparently, will be preventing all the tiny robots from crashing into one another as they shift around. At the moment, the scientists behind the DESI project, who come from 45 different institutions worldwide, are testing a miniature prototype involving ten robots; but the hope is eventually that the DESI will create a map that can help us see all the way back to the universe's beginnings. Got a shiver down your spine? You should.