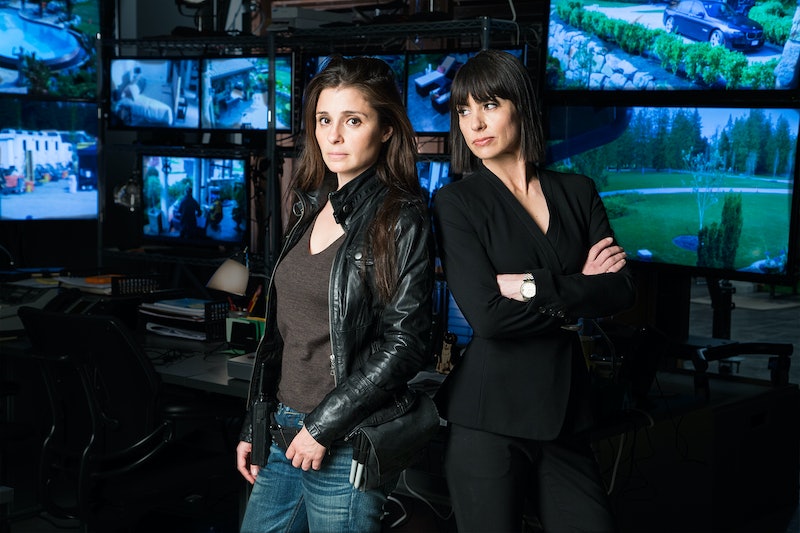 "Money, D*ck, Power." Those are the three words Rachel and Quinn both get tattooed on their arms on the Season 2 premiere of UnREAL. It's the opening scene and a telling one. These women have three things on their mind, goals that they plan to hit this year, and they don't care what you think about it. As the women in charge of the Bachelor-inspired reality dating show Everlasting, they're coming off their best season yet. One that included a suicide, a runaway bride, and a fairytale ending that led to some very big ratings. But UnREAL really isn't just about the behind-the-scenes madness at this reality show; it's about Rachel and Quinn. The two women we love to hate and hate to love, but somehow can't help ourselves. Screw likability — these characters are real female antiheroes that prove anything men can do women can do better, even being morally challenged.

Sarah Gertrude Shapiro, who spent three years as an associate producer on The Bachelor before co-creating UnREAL with Marti Noxon (writer/producer Buffy The Vampire Slayer), told the Huffington Post that "likablity" isn't part of this reality-show satire. The two women wanted to create Quinn and Rachel in the likeness of male antiheroes like Don Draper and Walter White. Somehow, though, it seems they've made two female characters that are more fierce than either of those men. These women would have gotten Don Draper into bed and taken him for everything he had. (Admit it, Don Draper would have been a great Bachelor contestant.)

Shapiro and Noxon created two women who are a step forward, even if their humanity is a step backward. "We don't solve problems," Rachel says, "We point cameras at them." It's this callous attitude that makes them hard to root for, but makes you want more of it. You want more lines like Quinn's "How long does it take to take out your tampon or whatever the hell we're doing?" These women appeal to our basic emotions. We're saddened by their behavior, disgusted that they could treat anyone this way, angry that they seem unwilling to change, but they surprise us, and somehow that is exciting. As Shapiro told the Huffington Post, at its heart, UnREAL is the story of women embracing the total power that comes from acknowledging their darkest self.

The two women are quotable in a way that has you wondering, "Did they really just say that?" Like when Quinn announces they've cast a black suitor for the new season of the show, and the network honchos question that kind of move. Quinn's response to quell their fears is that he's not black, "he's football black." This line also makes clear that men play a role on this show, but they're just supporting players. Or maybe they're just playthings, the "d*ck" that keeps these women in power. When Chet, Quinn's ex who is back to recapture the show, tells her, "May the best man win," Quinn responds, "She usually does." Quinn doesn't cower to these men. She rises up and uses them in whatever way will help her succeed in the end. She's always got her eyes on the prize. Quinn wants their piece of the pie.

Rachel is not as strong as Quinn; she's just trying to keep herself composed enough to make it through this experience. But she's learning and trying to be as cutthroat as Quinn. We see it in her evil godmother style posturing towards the contestants. She has the power to make these girls do exactly what she wants, like talking a contestant into wearing a Confederate flag bikini to boost ratings. (Her selling line? That not wearing it is against her free speech.) She goes after these women, hitting them where it hurts most, whether it's forcing them to talk about a dead fiancé or forcing them into a catfight with another women. Rachel is manipulative, but she's clearly learned from the best.

Since this show is on Lifetime, it's easy to assume this would all be a little over the top, but Rachel and Quinn feel real. This is likely because it's written by women for women. The fights between the two women seem real. They're not physical, like you assume from a man, but they go for the jugular. The intensity of female relationships is perfectly explained. As a woman, we've all had — though maybe not to this degree — the sort of friendship where you hate them and love them all at the same time, and basically for all the same reasons. These are psychological takedowns that hit you where it hurts most. Rachel and Quinn's relationship is toxic and abusive, but it makes for good TV.

This show is certainly not about feminism — or at least not the all-inclusive feminism that focuses on self-love, body positivity, and girl power that we're so hopeful will spread in 2016. No, this is about going out for blood and may the best woman win. There is no gender loyalty when it comes to making Everlasting. The struggle between Rachel and Quinn for power is a look at worst-case scenario feminism, the idea of having a mentor who isn't ready to be usurped. Quinn is good at playing mind games with Rachel, giving her control of the show, only to take it back and let her do what she does best: manipulating the contestants to do things on camera that will label them the crazy one. Rachel isn't good enough to run the show in Quinn's mind, but it also seems she's afraid she could do a better job, leaving her behind to feel useless.

These moments can be hard to watch, and these women will obliterate anyone who is in their way. It's terrible, sure, but you have to respect this level of competency. They are not interested in playing any other game but their own, which is why Rachel and Quinn will never be the best of friends, but the best of enemies. They each expose the insecurities of the contestants, but also of one another.

They are both as full of self-loathing and jealousy as the women competing for the heart of the latest suitor. They're vulnerable, powerful, and they're all real women. They've lost themselves, but they don't need to apologize for it. Instead, it's what they have to do to survive in this world they've created. This is a story of survival, who will get that last bracelet. Like them or not, Rachel and Quinn are the kind of female characters that you can't help but enjoy seeing. Mostly, because you haven't seen them very much before.