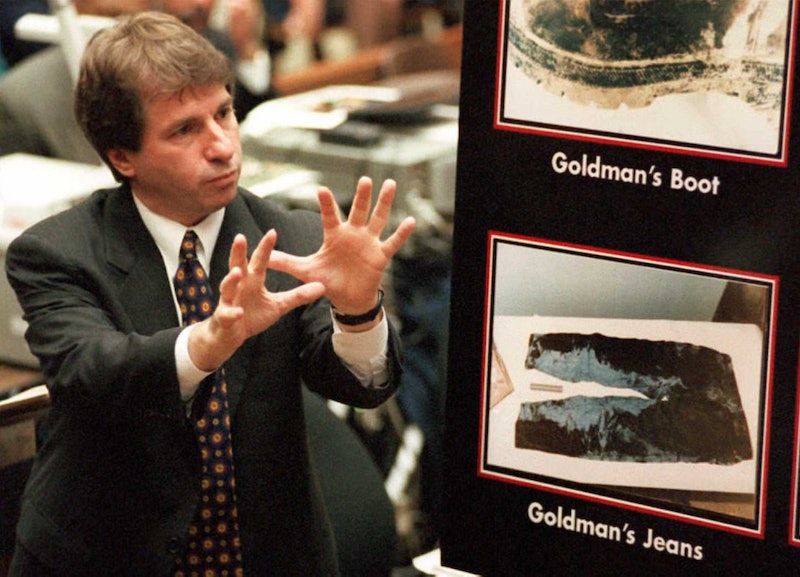 When the O.J. Simpson trial was captivating audiences way back in 1994, not much was known about DNA testing. Sure, people knew vaguely what it was, but CSI: Crime Scene Investigation wouldn’t premiere for another 6 years (that was how everyone became armchair experts in hair follicle matching). Who did know about DNA, though, was O.J. Simpson defense attorney Barry Scheck. A sort of smoking gun on Simpson’s team, Scheck, according to CBS News, attacked the LAPD’s methods of evidence collection as well as the prosecution’s forensic case. But where is Barry Scheck today? Bustle reached out to Scheck for comment on what he's doing now and has not yet received a response.

According to Biography, Scheck got his law degree in 1974, headed for the high-profile cases, and never looked back. He started as a Legal Aid attorney, but when he gained a spot on the staff of New York’s Cardozo School of Law, Scheck could finally spend time on cases that were important to him, such as defending Hedda Nussbaum in 1988. That case made him a notable name in the world of law, but when he was added to the roster of Simpson’s defense team, Scheck became an international name.

“It was a watershed case, but not in ways that people suspect. We did not challenge the underlying reliability of DNA testing methods; we attacked the way that evidence was gathered and processed. We had a 21st century technology and 19th century evidence collection methods.”

Scheck claimed that the LAPD criminalists were gathering different pieces of evidence without changing their gloves, contaminating and mixing samples, according to the same Los Angeles Times article. To today’s police force and jury, that may seem like a shocking mistake, but again, DNA was still a new science in 1994. According to CBS News, Scheck was among the first lawyers to take difficult, DNA-heavy evidence and present it to jurors. “In the Simpson case, some issues — the mixtures and statistics— seemed complicated at the time,” Scheck told the LA Times, “but the key points about cross-contamination were very straightforward. That's why it did change the way people [now collect] crime scene evidence.

While his recognition as a part of the Simpson trial promoted a kind of infamy in the late 1990s, Scheck told The Los Angeles Times that that’s all changed. “When you have the opportunity to be in the public spotlight in America, you've got to make good use of that," Scheck said. "People recognize me now more for the work of the Innocence Project.” And that's certainly an admirable legacy.