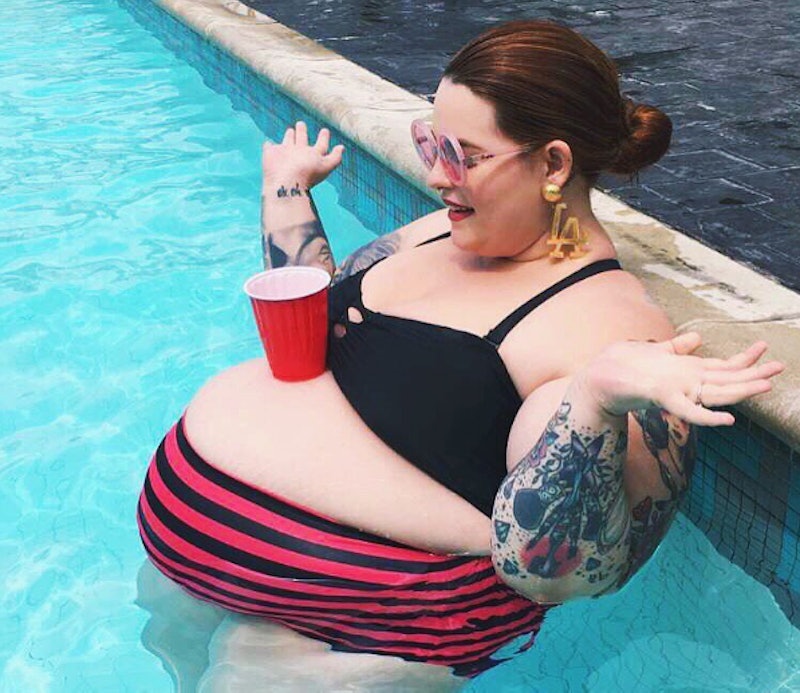 The much-anticipated and much-debated pregnancy of Tess Holliday has come to a close, with the announcement that Tess Holliday gave birth to a baby boy on June 6 hitting our news feeds, according to an exclusive with People. Her son, Bowie Juniper, is Holliday's second child; but the first with husband Nick Holliday. While no confirmation has yet arisen, I think it's safe to assume that Bowie Juniper's name is, at least in part, inspired by the late musician David Bowie: A musician who Holliday openly mourned after his death in Jan. 2016.

As reported by People, son Bowie Juniper Holliday measured 22 inches and weighed in at 8 lbs., 10 oz., and is said to be healthy on all accounts. Seemingly giving her family over a week to get used to the new arrival before sharing the news, Holliday has already proved that her new baby is her number one priority.

Ten years after Holliday's first son Rylee was born, Holliday is the first plus size supermodel to go through pregnancy and delivery in the public eye, and she made sure to use her platform to preach body positivity for plus size mothers during pregnancy against those who criticized her plus size body and deemed it unworthy of motherhood. This leaves no doubt in my mind that Holliday will continue to share self love during the raising of her new baby boy.

Speaking to People at the time of Holliday's pregnancy announcement, partner Nick Holliday commented, “I think it really solidifies the two halves of our family coming together. It will be nice to have the family more blended."

Now it seems that the thought has been solidified, as Tess took to Instagram to give her own comments on the birth of the pair's baby boy. Her simple caption, complete with six emojis, emphasized the excitement the two must be feeling over the birth of their newborn. It reads, "Our handsome little guy is here, Bowie Juniper Holliday. [Nick] snapped this while I was dressing him to go home."

The candid picture shows unabashed delight in her son. And as the candid look into their new life together suggests, it seems that both Tess and Nick Holliday are set to have a beautiful time with the gorgeously-dubbed Bowie Juniper Holliday.