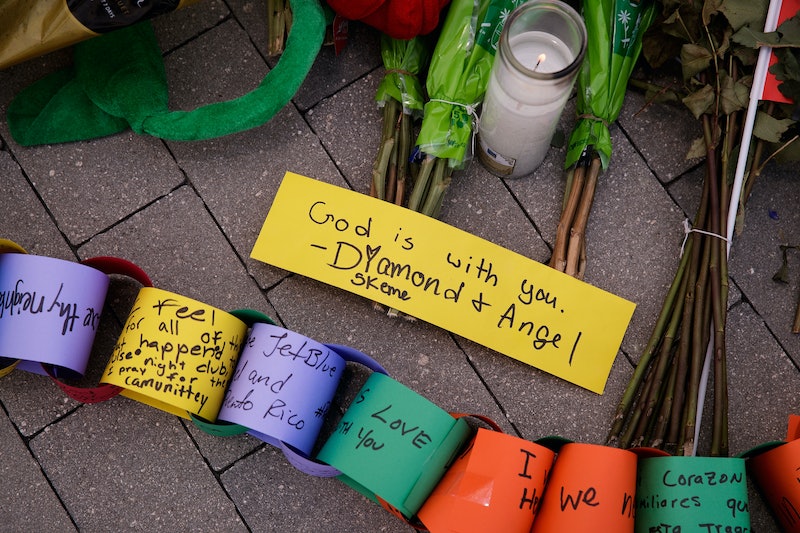 After the horrible mass shooting at the gay nightclub Pulse in Orlando, Florida, where 49 people were killed and 53 others injured and hospitalized, victims and families of victims are in need of financial and medical support. Organizations in Orlando have opened their doors to blood donors, and have received thousands of donors, and individuals and organizations have opted to raise money for victims and their families on crowdfunding websites like GoFundMe. But now that there are over 100 pages in support of Orlando victims on the website, can you trust crowdfunding pages?

You should never donate to a campaign unless you are positive that it is authentic and are able to verify that the funds will go to the people who need them. Luckily, GoFundMe says it has a specific vetting and authentication process underway in regards to Orlando funds.

GoFundMe spokesperson Bobby Whithorne wrote to Bustle in a statement, "There are currently 150 campaigns that have raised money for the victims of Orlando. We have vetted and are in communication with the campaign organizers to ensure they are communicating clearly to the donors about how the funds will be used. We are also vetting new campaigns that are created and guiding new campaign organizers to either donate to Equality Florida's campaign, start their own charity campaign to raise funds for Equality Florida, or start their own personal campaign if they have a direct personal connection to a victim. In order to protect the donors, the funds raised for individuals or families will not be released until the recipient is identified, verified, and vetted."

In other words, you can be sure your funds will go to the appropriate people.

Even so, Whithorne urges individuals to only donate to the campaigns they trust, and suggested making donations directly to Equality Florida's campaign, which the LGBT advocacy group describes as the "official Pulse Victims Fund page." In just two days, the page has already raised $3,596,697, which Whithorne notes is the "largest and fastest growing [campaign] in GoFundMe's history." GoFundMe itself has donated $100,000 to the campaign.

If you wish to support specific donor pages for individual victims, you can be sure that doing so through GoFundMe will be safe. The site's spokesperson also noted, as stated above, that the funds will not be released until the recipient is verified, and that in a case of a fraudulent page, donors will be refunded and the particular page will be removed.

Other crowdfunding pages like YouCaring and GiveForward also exist in the realm of offering help and care to people and community. The former explains on their website that donations are secure due to their encryption, but offers ways for users to report specific pages as fraudulent. The latter has a similar vetting and authentication as GoFundMe, but asks users to flag pages they find suspicious. Even so, GiveForward notes that individuals suspected of fraudulent behavior are always asked to provide more information to the organization. They also note that money will be refunded to donors in the case of a fraudulent page.

YouCaring has also set up a fundraising page in order to receive donations to help the Pulse shooting victims. All funds will go to the National Center for Victims of Crime, who will then distribute donations to victims of the attack.

While there are security processes that come along with all crowdfunding pages, it is important to be diligent about where you choose to donate your money — no matter what the case may be — especially online. Be careful to make sure that you either know the person whose page you are supporting, and be aware of suspicious activity on pages that might be alarming. For instance consider doing some research into whether a person is directly connected to the cause for which they are raising funds.

If you are interested in donating to the victims of the Orlando shooting, however, the best place to start is probably with Equality Florida's campaign.