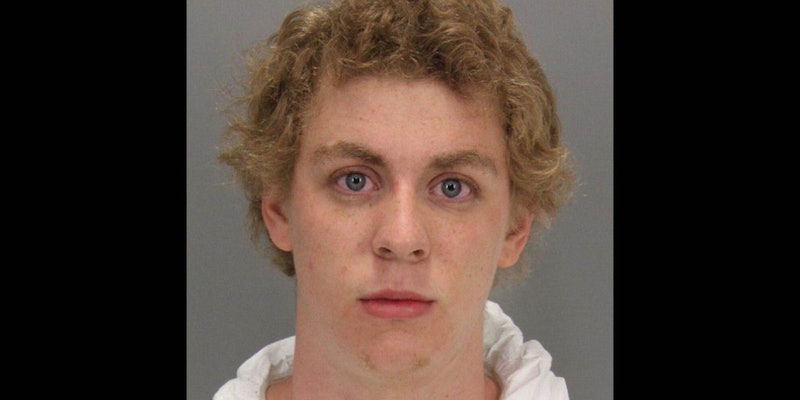 In June, when former Stanford University student Brock Turner was convicted of felony sexual assault but sentenced to just six months behind bars, there was a national outcry, sparked in part by his victim’s powerful statement. On Friday, Turner was released from jail, after serving three months behind bars. Given the severity of his crime, many believe Turner’s sentence was unfairly light. His parents’ behavior has also attracted attention; his father wrote a letter to the court complaining of his son’s loss of appetite and his mother expressed fear for her son’s physical safety. Neither parent mentioned the woman their son was convicted of sexual assault.

People have found this case compelling and disturbing for a number of reasons: the raw power of the victim’s statement; the way the case functions as a lesson in white privilege and male entitlement; the way even the most heinous crimes are barely or not at all punished when the criminal is an elite athlete; and how deeply parents can be in denial when it comes to their own child’s behavior. Too often when we talk about rape prevention, we focus on what potential victims (mostly women and girls) can do to avoid getting raped (mostly by men). We don’t spend nearly as much time talking about how to raise boys to treat women with respect, sexually and otherwise.

To help change the conversation, I asked dozens of psychologists, family therapists, and parents how to raise boys who understand consent and respect other people’s boundaries. Here’s what they told me.

Michael G. Thompson, a Boston-based psychologist and author of the New York Times bestseller, Raising Cain: Protecting the Emotional Life of Boys , tells me in an email, “It is difficult to sum up what loving parents do to raise a boy who won't ever be a Brock Turner because, of course, the vast majority of parents raise loving, caring boys who never commit crimes of any kind, much less rape.”

California-based author and psychologist Dr. Ted Zeff, who has written about raising non-violent boys, writes in an email that “violent male behavior may stem from the perpetrator’s fear that [he isn’t] behaving aggressively enough and may be thought of as feminine.” However, says Zeff, many qualities commonly associated with girls (empathy, sensitivity, compassion, etc.) are also “natural male traits — they are simply not recognized as such in many societies … in certain cultures, violent male behavior is nonexistent, such as in the Semoi of Malaysia.”

Ashley Patrick, writer and mother of two sons, ages 5 and 3, tells me in an email, “One of my biggest pushes is helping them to remember to ask permission, whether it's food or toys or hugging another kid who doesn't look so sure about it, and to respect the negatives: ‘No,’ ‘Stop,’ ‘Don’t.’”

Tarra Bates-Duford, a Florida-based psychologist and family therapist, writes in an email it’s crucial to reinforce the message that “‘no means no,’ meaning any thoughts or inclinations that sex will occur should stop once your partner refuses. … You are not entitled to sex just because you think it’s ‘about time,’ you have waited long enough, you purchased expensive items, or she may have said she wanted [to have] sex with you at an earlier date but now refuses.” Or as Keith Dent, a New Jersey-based family counselor and author of “The Truth I Need My Daughter (And YOUR Sons) To Know About Rape,” tells me, “Young men today do feel very entitled and they’re not given the right tools for how to approach girls and young women. … We need to go back to the basics: ‘No means no.’ That’s still a word that’s very clear.”

3. Answer Their Questions, Even If You're Embarrassed

Simon Isaacs, who lives in Brooklyn and is the co-founder and chief content officer of Fatherly, a lifestyle website for new dads, tells me in an email, ”Today, 30 percent of boys receive little to no sex ed at all before having sex for the first time. ... We need to give them the language to talk and the space to ask questions — particularly when it comes to conversations about sexuality, contraception, and consent.”

Patrick tells me she practices providing comprehensive sex education in her own family: “We use correct anatomical terms for body parts and answer all questions — all questions — openly and with a straight face.”

So does Adrian Montgomery, a stay-at-home mother of six children — a 13-year-old stepdaughter, a 7-year-old daughter, and four sons, ages 14, 5, 2, and 1 — who lives in Buffalo, New York. She tells me in a Facebook message that she and her fiancé “talk to the kids about everything under the sun." Morgan says when her oldest son "was learning how to talk," she "taught him his body parts, and explained that NO ONE should touch him without permission, and that he shouldn't touch anyone without permission."

For Montgomery, being open and honest about everything — not just sexual education — is essential. "We watch the news and have open discussions about EVERYTHING! I refuse to sugarcoat anything because, as I tell [my kids], ‘The asphalt doesn't taste like licorice!’”

Minneapolis-based child development and parenting expert Denise Daniels tells me in an email, “You are your child’s first teacher; do you model respect and consent in your home? Do you knock on your child’s door before you enter? Do you let them decide if they feel comfortable sharing hugs or kisses with grandma if they are clearly uncomfortable? Do you let them decide what they would like to wear when they leave the house?”

Hanley also urges fathers in particular to set an example for their sons: “How do you treat your son's mother? How do you talk about women in the media? What sort of implicit messages are you giving your son about sexuality?”

5. Help Them Learn Right From Wrong

However, it's not enough to model good behavior — experts say having regular and open discussion about cases, like Turner's, is also important. Stephanie Macadaan, a Los Angeles-based licensed marriage and family therapist with three sons, tells me in an email, “With older sons, it is appropriate to discuss what we are hearing in the news and ask them how they view it. … The more able our sons are to talk openly about this issue, the more they can feel grounded in knowing right from wrong.”

And that part — teaching right from wrong — may be the crux of it. Many parents and experts I spoke with said that teaching children not to have a sense of entitlement was essential to instilling a strong sense of morality.

Thompson tell me, “The key to raising moral children … is to love them and have high expectations for them: for the way they treat other people, the way they behave with other people, and then to give them specific and frank education about their sexuality (which most parents don't do)." He believes that, "If you do that with children, both boys and girls, you will help them internalize a sense of right and wrong that will stay with them even when they are drunk.”

Of course, these lessons don't apply just to how we raise our boys — they should be applied to our daughters, as well. As Kitty Hoffman, a Quebec-based writer, former professor, and mother of two 20-somethings, tells me, we should be bringing up boys “the way you raise anyone to be a decent human being.”