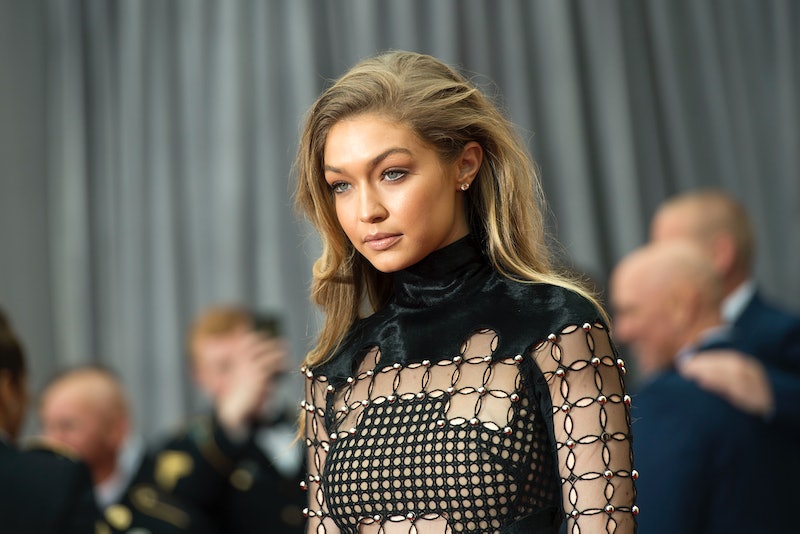 She's known for her long, blonde beach waves, so when Gigi Hadid stepped out with wild curls on Monday, according to Us Weekly, she looked nearly unrecognizable. I mean — whoa. This is definitely a look we haven't seen from the model before, but she totally pulls it off and looks ah-mazing.

Hadid was photographed in London visiting her boyfriend, Zayn Malik, at a recording studio, and I'm almost surprised the paparazzi were able to identify her, because she looked totally unlike herself, rocking a full head of '80s style curls. The 21-year-old wore her normally California girl, beachy hair in tight, voluminous curls, and to be honest, I'm not entirely sure if this look was styled, or if she was just taking a break from her flat iron for the day. I'd tend to say the latter because the curls look pretty natural and don't look too defined or styled, however, given her outfit (a band tee, tight jeans, platform sneaks, and round, gold sunglasses), it seems like she could be trying to channel that '80s rocker vibe. Either way, this look totally slayed, and I love that we're getting to see a different side to her than we usually do.

So fierce, right? We don't know for sure if she was trying to channel a past decade or if this look is natural, but just in case, check out a few of these '80s and '90s stars who Hadid's totally channeling.

I mean, this one was an obvious. Nailed it.

Just rocking the curls and winning all the awards

You can't have a curls list without mentioning Julia Roberts in Pretty Woman.

Yes. He needed to be included.