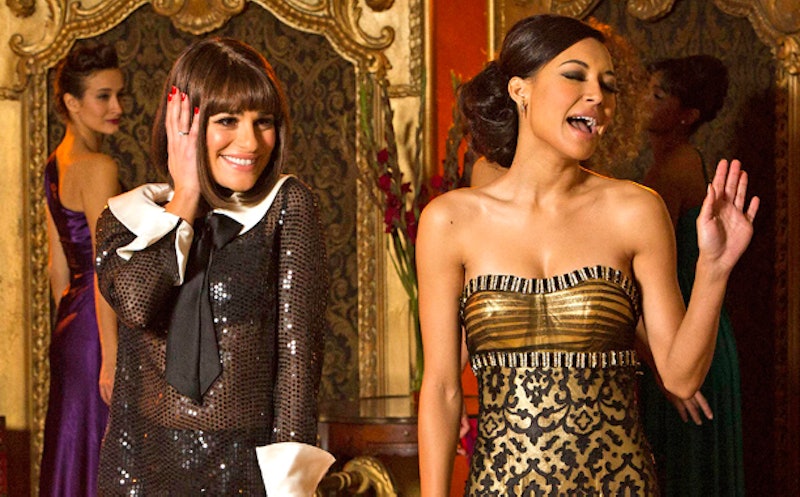 How Glee can continue to disappoint me, even when I set the bar so low for this musical dramedy, is amazing. On the mid-season premiere of Glee — which you probably didn't watch because it's on in the same time slot as Pretty Little Liars and, also, because Glee is terrible — we witnessed yet another one of the show's epic friendship showdowns. This time, the drama was between Santana and Rachel, whom, despite having enjoyed many months as close friends and roommates, destroyed their friendship over an understudy part in the Broadway production of Funny Girl. When Santana — who is feeling a little lost in New York, despite having booked a national yeast infection commercial — lands the part of Rachel's understudy, Rachel freaks out. Santana lashes back, causing Rachel to pull a Quinn-on-prom-night and slap her roommate right across the face, right before packing her things and ripping up a photo of Santana. (Did I mention this is all to a Kelly Clarkson song? Because it is.)

While I'm supposed to feel excited by all of this drama, I can't help but feel frustrated with Glee and the way it consistently presents female friendships as competitive, fickle, and oftentimes insincere. Sure, the dude bromances weren't always easy (Finn and Puck, Ryder and Jake) but when it comes to the ladies on the show, the friendships — or "frenemy-ships" — were always particularly vicious.

Real, supportive friendships between the girls of Glee have been practically nonexistent throughout the course of the show. At the beginning of Glee, Rachel was the starry-eyed target for mean girls like Santana and Quinn. But even as the show went on and Rachel became the star of the New Directions, her friendships with her so-called girlfriends continued to be complicated. Rachel and Quinn were super competitive over Finn, even when they were in their most "supportive" stage. There was rarely an episode where Mercedes and Tina weren't bemoaning about Rachel getting all the solos, which often led to attacks on Rachel as a person.

Outside of Rachel, we saw Santana and Quinn butt heads so many times that it was easy to forget that they were supposed to be friends. "Catfights" on Glee were so common that we barely blinked an eye when Santana slapped Quinn across the face during a heated argument. (Just in case you haven't noticed the pattern here, the ladies of Glee often slap one another across the face.) Then there's the more recent — and disturbing — friendship between New Quinn, Kitty, and New Rachel, Marley. Kitty's friendship with Marley was all part of a manipulative plot to have her develop an eating disorder. Because that's not a gigantic red flag that someone is a bonafide sociopath, that's just how female friendships WORK, am I right?!

As a woman, I know that female friendships aren't always easy, but the way that Glee portrays friendships between the women on its show is pretty sad. On the show, women are seen as so insecure and competitive that they cannot fathom supporting another woman. Is it realistic to show jealousy between friends? Absolutely. Is it fair to constantly show women undermining one another when they feel that their "territory" is threatened?

More like this
15 Piping Hot Behind-The-Scenes Secrets From 'Great British Bake Off'
By Emily Dixon and Darshita Goyal
What’s New On Netflix: Ana De Armas’ 'Blonde' & A Nick Kroll Special
By Arya Roshanian
What’s New On Netflix: Meet 'The Real Bling Ring'
By Arya Roshanian
'Survivor' Is Finally Coming Back To UK Screens
By El Hunt
Get Even More From Bustle — Sign Up For The Newsletter