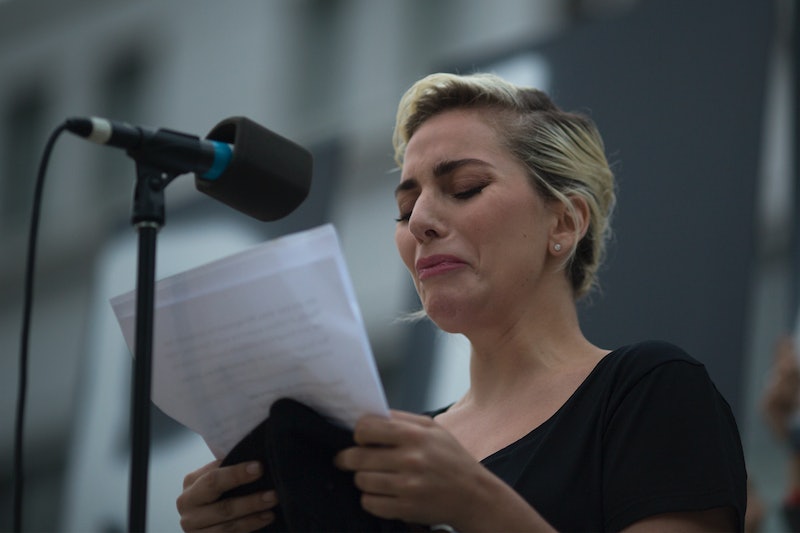 It's incredibly tricky to discuss how survivors of sexual assault "heal" after experiencing one of the most profoundly traumatic, destructive acts that can happen to a human being. Making an easy line from assault to "recovery" can risk diminishing the severity of a person's trauma. So let's make something very clear: there is no silver lining to sexual assault . There is no "good side," and there is no universal narrative of healing, closure, or being OK afterwards. As all five women on this list make clear, the process of reclaiming your life after an assault is complicated, treacherous, and often deeply confronting.

But all five of these women have spoken in some sense about the ways they've chosen to deal with their assault, and learning about how different survivors deal is an important aspect of the sexual assault conversation. Assault survivors are never just survivors; they are people of talent, strength and capacity; and in the situations discussed below and many others, those gifts have been used to attempt a kind of healing, both personally and for the wider community. There is no suggestion that these women have found the magic key and are now perfectly OK, but if you're a survivor, I hope this gives you some faith and some inspiration.

Obviously there is a major trigger warning for this article and all materials connected with it, including media and links. Please keep yourselves safe, and I hope you read this with pride for the people who've found their own ways forward through pain. If you yourself are struggling after an assault, please contact RAINN, your nearest rape crisis program, call Safe Horizon, or look at the Pandora's Project lists of helplines near you.

Lady Gaga's own relationship with her sexual assault (which happened when she was 19, and was assaulted by a man 20 years her senior) has been complex: she told Howard Stern she "didn't want to be defined by it," but in 2015 she opened up more significantly about how she'd survived. "I didn't tell anyone for, I think, seven years. I didn't know how to think about it. I didn't know how to accept it," she told a TimesTalk discussion panel in 2015. "I didn't know how not to blame myself, or think it was my fault. It was something that really changed my life. It changed who I was completely. Because of the way that I dress, and the way that I'm provocative as a person, I thought that I had brought it on myself in some way, that it was my fault.”

Gaga's biggest contribution to the healing of other survivors is likely her Oscar-nominated song, "Til It Happens To You," which she co-wrote for the soundtrack to the 2015 documentary The Hunting Ground, a highly-acclaimed study of rape and rape culture on college campuses. She performed it, of course, surrounded by 50 other survivors of sexual assault on the Academy Awards stage, with an introduction from Vice President Joe Biden himself: essentially as visible as you can be.

Wagatwe Wanjuki's story is one of the most shocking university assault cases in America's recent history: according to the Huffington Post, "Wanjuki first became public as a survivor in 2009, when she was a student at Tufts University in Massachusetts. Wanjuki says she was assaulted multiple times by a fellow Tufts student she was in a relationship with, but when she tried in 2008 to report him for a campus adjudication, the university told her their legal counsel said they didn’t have to take action." In 2009, Wanjuki was told she had to withdraw from the university due to slipping grades, which she attributed both to dealing with the trauma of her assault and the lack of support she felt she received from the administration. (In 2014, Tufts University was found to be in violation of Title IX by the Education Department’s Office for Civil Rights.)

Wanjuki's healing process has been to go public and get angry. She was behind the #SurvivorPrivilege hashtag that blew up on Twitter in 2014, excoriating the idea that sexual assault survivors have any kind of "privilege" or benefit in their situation. She's been a devastatingly eloquent public figure arguing about the biased media coverage of rape cases, gave a TED talk in February 2016, is a sought-after speaker on college campuses, and now works as an activist and writer in New York, publishing excoriating essays on her treatment and working with organizations like Change Happens, See It, Name It, Change It, and Feminist Activism On Campus.

The 2002 book The Lovely Bones — which discussed the rape and murder of a 14-year-old girl from the point of view of the girl herself, as she watched her family and her murderer from the afterlife — was an enormous hit. And for its author, it also provided outlets to explore elements of her own personal history. Author Alice Sebold was raped in a tunnel in Syracuse, New York, during her first semester of college in 1980; another woman had been raped and murdered in the same tunnel. In an interview with The Guardian , Sebold tracks her life across two lines after that point — she began to pursue writing, but she also pursued justice.

After a trial in which she was apparently described as "the best rape witness ever seen on the stand," Sebold's rapist was given the maximum possible sentence. But writing the novel that would help Sebold deal with the trauma took much longer than the trial; Sebold wouldn't complete work on it until her mid-30s. She's also written a critically acclaimed memoir about the assault itself, Lucky, in which she addresses the aftermath of trauma and destruction and the reactions of her family. A note: Lucky is essentially one big trigger, so utilize caution (or take a pass on reading it) if you're feeling vulnerable or dealing with your own assault.

It's safe to say that if anybody can be counted as an utter and total success, it's Oprah. She was the only entertainer in the top 50 of the recent Forbes rankings for the world's most powerful women, and is worth billions of dollars. The connection between her childhood sexual assault and her adult success isn't a straightforward one, but she herself has said that she would "take nothing from her journey," and that her trauma has helped her "build a great empathy with people".

The details of her early life make for extremely hard reading. Oprah was regularly beaten as a child, and sexually assaulted between the ages of nine and 14, which led to a pregnancy and a baby that died two weeks after birth. She gave an exceptionally powerful interview to MAKERS about how interviewing child molesters as part of Oprah, her talk show, gave her the capacity to heal. "It was on my show and I was probably 44, 46," she said, "that I actually got freed. And I'd talked about it for years before that. But it wasn't until I heard a molester talk about their procedure for luring.... that I realized, Oh. It really wasn't me. My 9-year-old self was no match for a 40-year-old who'd already decided 'I'm going to get you'."

Jess Ladd, declared by Marie Claire as one of their "new heroes" in 2015, was assaulted while she was a student at Ponoma College. Her experience led her to create an entire company based around aid for sexual assault survivors — specifically, their needs to access information and report what has happened to them. She's the founder and CEO of Sexual Health Innovations, an organization that targets sexual health and wellbeing across the U.S., from assault survival to STDs and sexual pleasure. And in August 2015, they rolled out one of their biggest innovations: Callisto, an online sexual assault reporting system that allows victims to fill out an incident report with all their details and either submit it to the authorities or save it online, creating a notification service if anybody else reports the same assailant or details.

In February 2016, she gave a phenomenally powerful TED talk about the idea behind Callisto, in which she spoke about horrific statistics behind sexual assault in the U.S. "Only six percent of assaults reported to the police end with the assailant spending a single day in prison," she told the audience. "Meaning, there's a 99 percent chance that they'll get away with it. This means there's practically no deterrent to assault in the United States." Callisto is attempting to give sexual assault survivors who don't want to use conventional reporting measures for whatever reason (shame, anxiety, worries about police attitudes or stigma) another way to make their information available and bring perpetuators to justice. And one of the first places Callisto's been trialed? Her alma mater, Ponoma College.