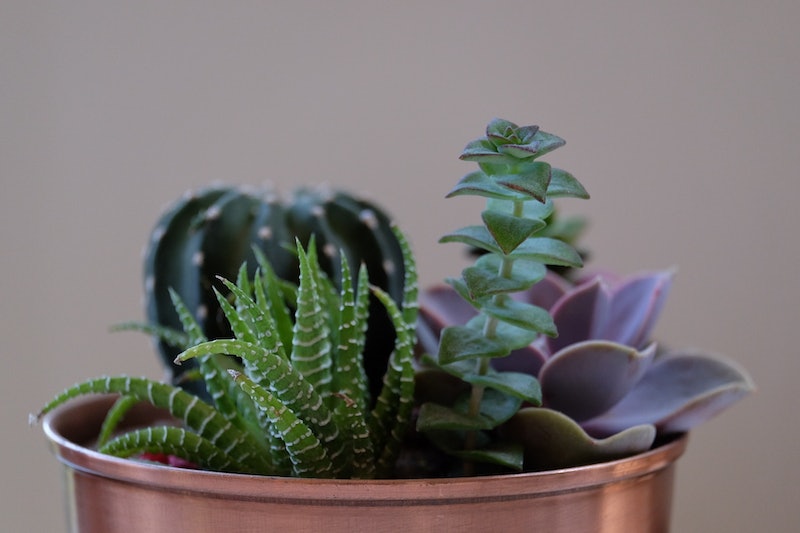 I happen to be someone who has a black thumb, as opposed to a green one, so I'm generally all for any trick that promises to help me not kill off my indoor flora. Like, for example, using ice cubes to water houseplants. But although the trick is quickly going viral right now, inquiring minds need to know: Is it really legit? Proponents claim the method is ideal because the slow-melting ice allows for better water absorption. Upon doing a little metaphorical digging, however, it's clear this practice is controversial in horticultural circles.

Those who support using ice cubes to water houseplants cite two main benefits: The slowed rate at which the ice melts gives roots and soil adequate time to absorb the water properly, and that same slowed rate ensures water doesn't pool or leak out of the bottom of the plant's container. People who use the trick swear by it, posting pics of big, beautiful, apparently healthy blossoms all over social media. In fact, there are entire companies devoted to selling "ice cube orchids" which come with strict instructions to water using three ice cubes per week. This all sounds well and good, right? Where do I sign up?

But for every proponent, there's a horticultural expert or enthusiast who counters that it's a bad idea. For example, according to Becky Brinkman, manager of the Atlanta Botanical Garden’s Fuqua Orchid Center, which is home to one of the country’s largest orchid collections, this trick is a surefire way to kill your houseplants, particularly heat-loving orchids. "Tell me you don’t do this," she said to HGTV Gardens. "In nature, a moth orchid seldom experiences temperatures below 60 degrees. And you’re thinking about applying ice water to its roots? Why not just put it in the freezer for a day?"

Additionally, the Oregon Orchid Society devoted an entire page on their site to dispelling some of the more popular myths around it — i.e. it prevents overwatering, freezing water kills bacteria, and ice cubes can provide the "cool drop" needed to trigger a new bloom. As far as overwatering goes, the Society says that while it is true that overwatering is the most common way people kill their orchids, most people don't have a solid grasp on proper watering practices for orchids to begin with — these plants crave humidity, so the goal is to create humid spaces by misting or with the evaporating water from wet bark. Bacteria? Most of it won't be affected either way by frozen water. And lastly, triggering blooms by any method can be stressful for your plant.

Plenty of other possible problems popped up in response to a Reddit query on this very subject two years ago. Could this have been where the ice cube method started? A Redditor by the username of Jowlsey claimed to have "stumbled upon the idea" when they dropped ice cubes on the floor and decided to toss them into a few houseplants. Other Redditors chimed in with words of caution, warning that using ice cubes to water plants could shock the roots and cause slowed growth potential or manifest a dormancy reaction.

So with all that said, the evidence on both sides is largely anecdotal. The ice cube trick hasn't been studied enough to say with all certainty whether it will harm your houseplants, and much of the information advising against the method pertains to orchids and other heat-loving varieties of house plants. If you, like me, tend to inadvertently kill off your houseplants anyway, you may be thinking, "Hey, what's the harm?" Just keep in mind that root shock can take time to show, so you'll need to monitor your plants accordingly. Otherwise, if they seem to thriving, well, it seems you may have found yourself one really cool way to water your household flora.