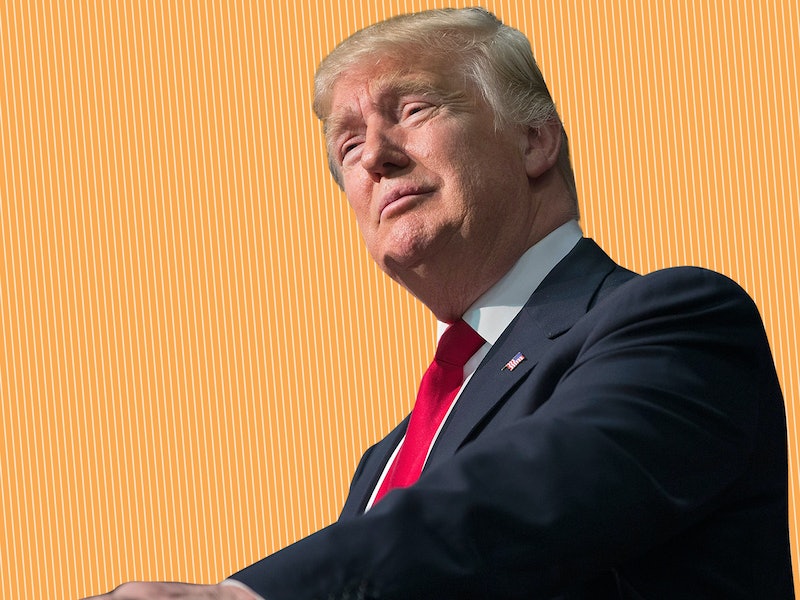 Despite furor over presumptive Republican presidential nominee Donald Trump's decision to "revoke" The Washington Post's press credentials on Monday (and other media outlets' access to his events, including Politico's, BuzzFeed's, The Daily Beast, and Univision's earlier in his campaign), Trump insisted that he wouldn't continue warring with the press and denying access if he's elected president. Furthermore, he insists that, in his opinion, there's absolutely nothing fishy about a presidential candidate shutting down access to publications that criticize him. Nothing at all.

In my case, I'm a person running for office. I rent these large arenas ... so I have an option [to deny media access]. When I'm representing the United States, I wouldn't do that. But I would let people know if somebody's untruthful.

When denied credentials, the journalists covering Trump's events are unable to attend press conferences or gain press access at rallies. Some media experts are worried about the precedence Trump is setting on the campaign trail, and they fear the effect it could have on the reporting and conversations that surround Trump going into the general election — and, in the worst possible case scenario, throughout the next four years.

Since announcing his candidacy last year, Trump has never exactly been a darling of the press. From the early days of crying "unfair" whenever he was fact-checked, Trump's approach has often been to blame and lash out at "the Media" for his own shortcomings. As we shift into the general election, I only see Trump becoming less tolerant of the press. He's more or less made it known that media folk who cross him (based on whatever arbitrary line he draws) run the risk of losing access to his campaign if they continue to write critically about him.

Stories of Trump bureaucratically shutting down the fourth estate are disturbing, and, while significantly less visual, they're not at all unlike the videos of him gleefully directing his security to walk protesters out of his rallies. I believe this practice of expunging protesters and non-indoctrinated witnesses removes a crucial part of the election narrative and creates a space for something more sinister to grow.

What's scary about this situation isn't that Trump doesn't like to hear criticism, or that he appears to be decidedly against critical debate and conversations about nuance in policy, or even that he doesn't show respect for freedom of the press. (Don't get me wrong, those things are terrifying in themselves.) What's truly scary to me is that Trump believes he can convince the American people that these actions are going to somehow fade away once he is in office — as if a campaign built on a platform of bullying and silencing his detractors could lead way to a presidency that protects those necessary freedoms.