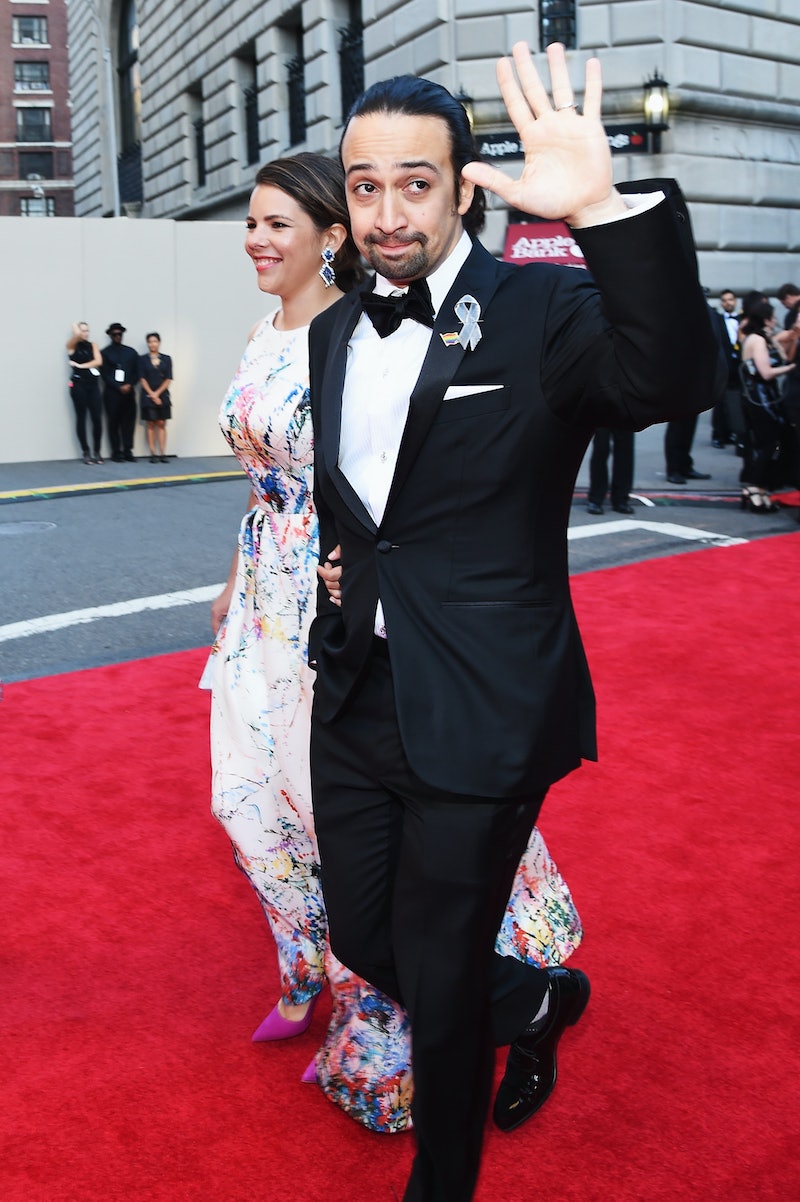 Hamilton has featured a pretty consistent cast since it opened at the Public Theater in January 2015, but, much to the disappointment of fans, that's all about to change Saturday night. See, July 9 is a Hampocalypse of sorts, as many of the Broadway show's stars are taking their final bows — including creator Lin-Manuel Miranda, who will depart the title role for the silver screen. (According to Broadway.com, he'll be working on a Mary Poppins live action movie sequel, and a film adaptation of In the Heights is also in the works.) Say it ain't so!

As if that wasn't devastating enough, Miranda is not alone. Leslie Odom Jr., aka Aaron Burr, is also leaving the show, and according to The New York Times, we'll also see the last performance from Phillipa Soo (Eliza Hamilton) as she heads to Amélie on Broadway.

Now that Doomsday is upon us, maybe you are freaking out that the ticket you bought months ago will not feature many of the original cast members. But here's the thing: The cast has changed before, and it was all OK. Let's look to the casting of King George III, the only part in the musical that has been played by four actors, for inspiration. In fact, the actor portraying the role has changed so often that the Kings have a brotherhood ritual called the "Order of the Garter," in which the King wears a garter on his calf that is passed along from man to man while "Electric Bird" by Sia plays in the background.

So yeah, Sunday's matinee will certainly look different, but that's really about all that will change. People will still be lining the sidewalks with their sleeping bags to see the new cast, tickets will still be insanely hard to procure, and — no matter where or when you see it — Hamilton will still be amazing.

Not convinced? Here are three more reasons to relax during the Hampocalypse:

1. The New Cast Will Be Broadway Buffs

Miranda’s replacement is Javier Muñoz, his understudy who has been playing the title role on Sundays since the show hit Broadway — so, you know, he's prepared. Even President Barack Obama saw Muñoz as Alexander Hamilton when he went to see the musical last year with his family! With the Presidential Seal of Approval, you can trust this new talent. Also, this isn't even Muñoz's first time replacing Miranda in a show: He previously took over for Miranda in In The Heights.

As for everyone else — according to USA Today, Brandon Victor Dixon, a Tony Award-nominee from Shuffle Along, will be taking over for Odom, and Soo will be replaced by Lexie Lawson, who starred in the national tour of In the Heights.

Hamilton's cast has always had Broadway cred, and that won't change. Take the musical's four kings, for instance: Previous Shrek the Musical star Brian d’Arcy James originated the role of King George III at the Public Theater, before leaving the show prior to its Broadway debut to star in the musical Something Rotten!. Jonathan Groff, former Glee and Spring Awakening stud, then originated the role on Broadway before Andrew Rannells briefly took over. Both Rannells and current crown bearer, Rory O'Malley, are former Book of Mormon leads.

2. Each Actor Will Make It Their Own

Sure, the King has been played by four Broadway greats, but maybe that was a good thing — it made each performance just a little bit different. For instance, when I saw Hamilton, James grapevined up and down the stage as the King. He was big, burly, and jolly, and yet still light on his feet. Months later, I noticed Groff’s royal garnish when he "glide walked" down center stage — he also stood out because he was commanding and villainous, but it was certainly different. (He also only broke the fear facade to say “Awesome! Wow!” mid-song with a mocking tone, which was great.)

Rannells was only in the show briefly, but has spoken about not trying to replicate Groff’s genius walk: According to Playbill, he played off of the King’s slow slip into madness. And now that O’Malley has been crowned and gartered, he has played the role with an animated look of disgust, often giving the King another chance to be the center of attention. If this particular role can be played just a bit differently each time, I'm confident the new cast will bring their ideas to the room where it happens.

3. The Musical And The Man Are Pure Genius

Despite cast changes, the writing of Hamilton never goes anywhere. Besides winning the Tony Award for Best Musical, Miranda won the Tony for the Best Original Score and Best Book of a Musical. Plus, the book won a Pulitzer, so there's no denying that the show will be fantastic, no matter who takes center stage. Everything Miranda touches turns to gold, and that won't change with a new cast: His YouTube channel called "Usnavi" features videos of his musical wedding and punny raps about it being "hot as balls" outside. Anything from freestyle rapping about Darth Vader and pumpkin pie on the Tonight Show Starring Jimmy Fallon to busting feminist rhymes with Emma Watson, the man is unstoppable.

We haven't heard yet what cast members Renée Elise Goldsberry, Christopher Jackson, or Daveed Diggs plan to do in the future when it comes to their roles in the show, but even if they're next to leave, don't stress — Hamilton will still be Hamilton, just with a slightly different look. And, if you're missing Miranda and co., you can always see them again in the roles they originated: The musical was actually filmed with the original cast, and it will be shown on PBS on October 17.