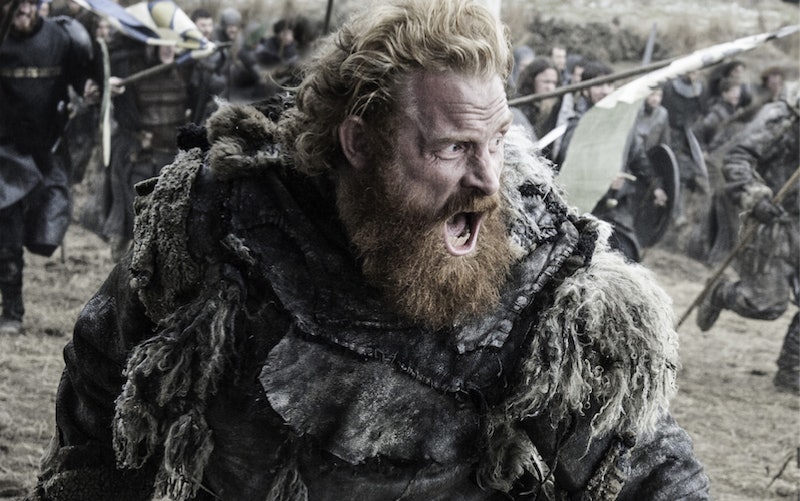 War is upon us, Game of Thrones fans and if the newly released "Battle of the Bastards" photos are any indication, it's going to make for one very epic fight scene that will leave all of our jaws on the floor. Of course, the show's ninth episode has always delivered unforgettable moments in past seasons, such as The Battle of the Blackwater and the infamous Red Wedding, but something tells me this one may very well top them all. The only question that remains is... who will come out victorious in the end? Who will win Battle of the Bastards on Game of Thrones ' second to last episode of the season? The ruling could go either way at this point.

On the one hand, Ramsay's army looks pretty impressively, especially in the promo video. And based on that obnoxious smirk we see come across Ramsay's face, he knows it and thinks victory will be his. However, that could also end up serving as his downfall. He confidence could make him underestimate his enemies and make him unprepared for the resistance they're bound to deliver. Sure, his men have conquered other soldiers before, but I highly doubt they've ever faced Wildlings, not to mention a fully grown giant who will definitely be able to make a significant difference for Team Jon and Sansa.

These men have faced White Walkers and the bitter cold and lived to tell the tale. So yeah, I don't think it's completely out of the question to say that they could come out as the winners of this battle. What they lack in numbers, they make up for in cunning and brut strength. Plus, there's the fact that the promo seems to make the odds look in Ramsay's favor, with his army menacingly advancing on Jon's men. But promos are meant to be misleading, so I almost take that as a good sign of what's to come.

Unfortunately, we can't look to George R.R. Martin's novels anymore for answers since this battle hasn't even happened yet, but I have to believe that Jon Snow wasn't brought back from the dead just so he could die on the losing side of this battle. It's high time Ramsay pays for all the horrible things he's done throughout the years and this feels like a perfect opportunity for him to get his just rewards.

For me, though, it all lies in the conniving hands of Littlefinger. Many have speculated that he is the one Sansa secretly wrote to a few weeks back, undoubtedly requesting the use of her cousin Robin Arryn's army. Will he deliver on his promise to her for once or does he have another betrayal in store? Whatever he decides could make or break the outcome of this war.

Let's just hope Sansa hasn't put her trust in the wrong person. Otherwise they may all be doomed. I suppose we'll find out one way or the other on Sunday. Gulp.