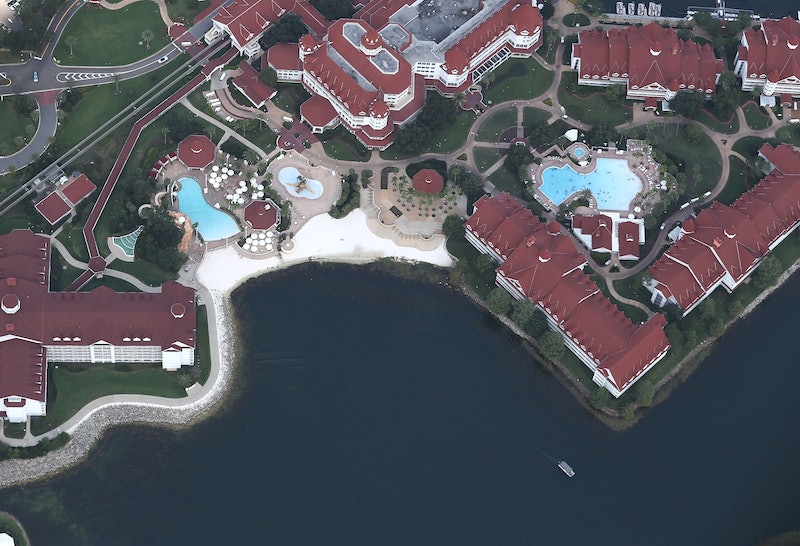 It's the place where dreams come true, but for one family, a trip to Walt Disney World has become nothing short of a nightmare. On Wednesday, law enforcement officials confirmed that a 2-year-old boy had been killed by an alligator attack, which occurred Tuesday night near a Disney World resort. It's the latest tragedy to darken the Orlando community in a particularly horrifying week, but it's important not to blame the parents of the Disney alligator attack victim.

On Tuesday, the toddler was reportedly wading in the water of a lake near Disney's Grand Floridian hotel when an alligator dragged him underwater. The boy's body was found by a law enforcement dive team on Wednesday afternoon. CNN reported that the boy's body had only a few puncture wounds, and Sheriff Jerry Demings speculated that the toddler had drowned when pulled underwater by the gator.

The Graves family, visiting from Nebraska, had been enjoying a magical, Disney movie night outside the hotel when the boy wandered into water about a foot deep. Now, they've suffered the loss of their young son, and many have taken to social media to criticize the parents as careless or negligent, which is the absolute last thing they need to hear.

To call these parents careless and negligent aren't exactly fair criticisms. After all, we're talking about a family who just lost a son. To minimize the parents' suffering with unwarranted blame would be tragically inappropriate.

Let me pause here to provide an important disclaimer: I am not a parent. I have never had a child of my own to look after, and as such, I have also never lost a child. I do not wish to imply that I understand firsthand the pain or suffering that the family is going through. However, I don't believe that it takes a parent to empathize with those who have lost a child — and that's what they actually do need.

It's a sad reality of today's social media culture that judgment passes faster than conservative laws would under a Republican House, Senate, and White House. Tuesday's incident immediately sparked hateful or speculative tweets, posts, and shares from social media users who seemed not to care what the victim's parents were feeling. A similar debate arose over Memorial Day Weekend, when a young boy fell into the gorilla enclosure at the Cincinnati Zoo.

To the haters, I'll say this: Put yourself in these parents' shoes. They're on vacation at the most magical place on Earth with their two young kids. (The Graves also had a 4-year-old daughter at the resort with them.) They found themselves in Orlando at a time of great chaos and distress, as the city was still reeling from the violence that occurred over the weekend. Then, they suffered the unthinkable: They watched their son be taken from them by an alligator.

Romper's Kimberley Richards summed it up nicely: "With so much tragedy, there should be no room for judgment." Social media gives us an ever-accessible platform for speaking our minds, but it's not our job to call these parents' intentions into question. I'll leave the speculation to the investigators and focus on empathy instead.

More like this
25 Things I've Reduced My Life To, In Addition To WFH In My PJs
By Ginny Hogan
So Many Dog Owners Are Obsessed With These Weird Dog Products
By Veronika Kero
Amazon Keeps Selling Out Of These Pet Products With Near-Perfect Reviews
By Madison Barber
The 7 Best Cat Litters For Odor Control
By Erica Gerald Mason
Get Even More From Bustle — Sign Up For The Newsletter