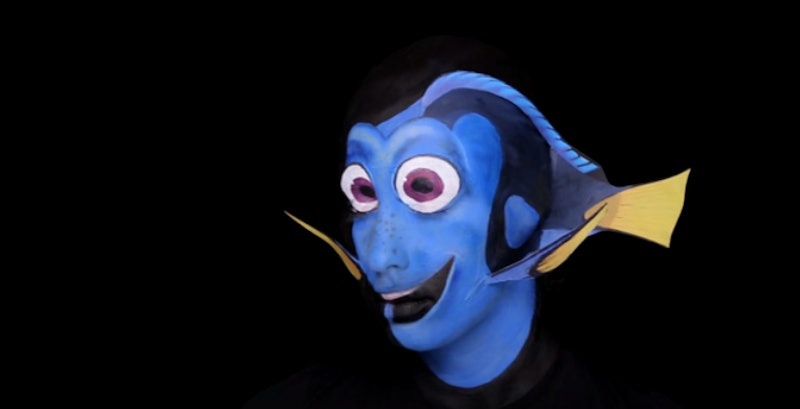 There are some makeup artists who painstakingly create beautiful tutorials for the world, so that people everywhere can learn how to get a perfect cat eye, or master the art of strobing. There are also makeup artists who create tutorials on how to look like a fish, specifically Dory from "Finding Dory." One of said makeup artists is named Chrisspy, a woman who created a makeup tutorial for Dory and it's seriously amazing. (She is good at regular makeup too, in case you were wondering. Her Youtube channel boasts over 1.5 million followers.)

Now, why anyone would ever want to paint their face to look like a forgetful blue tank fish is beyond me, except maybe for Halloween, but I must admit, Chrisspy is rather skilled at the application. (Although I think I would consider this more of a face-painting exercise than a makeup tutorial.) Any makeup tutorial that requires a glue stick and a bald cap probably should not be considered a makeup tutorial.

On that note, Chrisspy's end result is pretty freaky, although it is rather impressive. Her resemblance to Dory is honestly astounding. She is a true artist and she definitely knows a thing or two about angles and perception. Maybe there will be "Finding Dory" The Musical on Broadway and she can do all of the makeup.

Yes, that is a human face under there.

Weirdly enough, Dory is not Chrisspy's most entertaining, weird or creative makeup tutorial.

They pretty much all require a bald cap though, which is where you lose me.