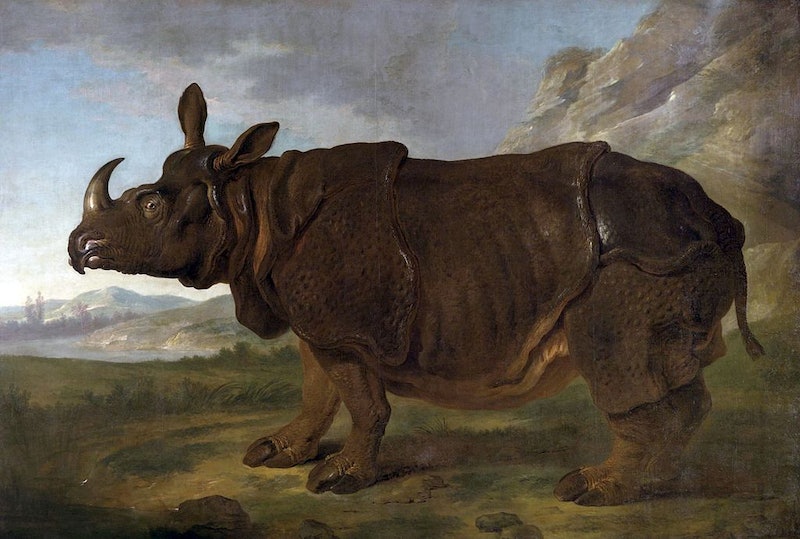 Humans have been obsessed with animals (and their potential for mayhem/ awesomeness) since long before we had cat memes. And so it makes sense that history's most important animals tend to be defined by their relationship to humans, whether they allegedly burned down a city, were made a Roman consul, saved men during wars, inexplicably survived being hit by torpedoes, or just caused sensations in Paris. Not all the historical animal stories below are particularly heart-warming, but they're all definitely worthy of their own biographical films (and not just the made-for-TV kinds, either).

Modernity has its own famous animals: Koko the gorilla, for example, who can communicate extensively in sign language and was recently given kittens as pets, or Paris Hilton's much-mourned Chihuahua, Tinkerbell, who essentially defined the 00's. But they can be secure in the knowledge that they're part of a long, (mostly) illustrious tradition of animal fame.

Here are nine of the most famous animals in history, with stories that survived even without viral social media to spur them on. They're worth reading for that achievement alone.

If the name doesn't immediately jog your memory, perhaps that's because you know of Incitatus as "the horse that the Roman emperor Caligula attempted to make a consul." According to Roman historians, Incitatus was the ultimate pampered pet — his feed had gold leaf mixed in and Caligula (pictured) adored him so intensely that he wanted to appoint him as one of Rome's highest political leaders.

However, it's worth remembering that the truth of this story is seriously debated among scholars, with some claiming that this tale has been popularized by historians invested in establishing Caligula's madness and wastefulness. And even if it is true, Caligula himself may have had an agenda when he tried to get his horse established in the government: considering appointing a horse as consul may have been a satirical move aimed at denigrating the humans holding the position. Political move? Smear campaign? Sign of a seriously deranged leader? I say, who cares. It's a fantastic story.

Though Europeans had heard rumors for years about a giant horned creature living in Africa, Clara the rhino was the first animal of her kind to be exhibited widely in Europe. Orphaned as a baby, Clara was given as a pet to the head of the Dutch East India Company. Later, she was transported to Europe by an enterprising Dutch sea captain in 1741, where she caused a sensation. According to the episode of David Attenborough's Natural Curiosities about Clara, she was a royal favorite, commanding audiences among rulers as well as fascinated public crowds, and even started a fashion rage in Paris, with wigs styles "a la rhinoceros" and poems dedicated to her. However, contrary to popular belief, Clara didn't actually inspire the famous woodcut of a rhinoceros by Albrecht Durer: that was done in 1515, and was based on a rhino that tragically died while being transported by ship from Lisbon.

Originally a street dog in the Soviet Union, Laika achieved fame (or, at least, infamy) when she was shot into space by the USSR on board the spacecraft Sputnik 2 in 1957. She and two other dogs, Mushka and Albina, were given space training — including weightlessness simulations and time in centrifuges — before Laika was selected to take the first flight of a living creature from Earth into orbit. Sadly, in 2002 it was revealed that Laika had died within the first five hours of the flight, despite Soviet assurances that she had died quietly in space within a week. It seemed that the stress of the launch and the rapidly increased humidity and temperature caused her to die while in acute distress.

Yes, a pigeon. Cher Ami is actually currently preserved in the Smithsonian as one of the great animal participants in World War I. The pigeon was a messenger, used for communication in the trenches of France, and flapped its way into the history books by managing to get a message from a besieged American commander to American HQ. The commander led a troop remembered as the "Lost Battalion" — a group of 550 men who had dropped out of contact and been lost for several days. The message was to the point, containing the position of his forces: "WE ARE ALONG THE ROAD PARALELL 276.4. OUR ARTILLERY IS DROPPING A BARRAGE DIRECTLY ON US. FOR HEAVENS SAKE STOP IT." Cher Ami survived German fire, delivered the message that saved the battalion, and was awarded the Croix de Guerre by the French government.

Another war story, again from the American army, but from an entirely different part of the world. Smoky, a tiny Yorkshire terrier, became a mascot of the U.S. Armed Forces after she was found by a soldier on a battlefield in New Guinea in 1944. She lived with Corporal William Wynne as he fought across the South Pacific, warning him of incoming shell fire, living on soldier rations and, at one point, saving hundreds of hours of labor by running a telegraph wire through an 8-inch wide tunnel for 70 feet. Smoky enjoyed massive post-war celebrity, appearing on many variety shows and in army hospitals performing tricks before her death in 1957.

Like Clara the rhino, Zarafa was a celebrity because of her unexpected arrival in a Europe that hadn't seen her kind in centuries. She was, hilariously, a diplomatic gesture: the French ambassador in Egypt apparently told the Sultan that he needed to give an extravagant gift to the French king to gain support for a war, and the Sultan's solution was Zarafa. The giraffe arrived in France in 1826, accompanied by three cows to give her milk (she was still so young that she needed to be nursed), and proceeded to walk from Marseilles to Paris, attracting a media frenzy along the way. Rather like Clara, she spawned crazes in hair styles and giraffe-spot dresses. And, amazingly, she lived for 18 more years in Paris's Jardin des Plantes.

Of all the historical animals on this list, I have a favorite, and it's Unsinkable Sam. Although reports about the veracity of Sam's existence are a bit debated, the official story is that he managed to survive, unaccountably, the torpedoing of three different warships from both sides of the conflict in World War II in 1941, with no apparent injuries. The first was the German battleship Bismarck, sunk in May; the second was the British destroyer Cossack, sunk in October; and the third was the British aircraft carrier HMS Ark Royal, sunk in November. Each time, the black and white cat was found on floating debris and rescued. With British understatement, he was described on his last rescue as "angry but quite unharmed." As you would be. He was then kept on dry land, where he lived until 1955. (Note: we don't have a picture of Unsinkable Sam, but I feel this one captures his spirit.)

The name may not mean anything now, but in early 20th century America, Beautiful Jim Key was one of the biggest celebrities on the promotional circuit, largely because he could do extraordinary tricks. His trainer was a wealthy, educated former slave, Dr. William Key, who originally took purebred Arabian horse Jim on the road to market veterinary medical cures. But eventually, the two honed an act that involved arithmetic, recognizing letters and spelling the names of audience members. The Key show was gigantically famous: Beautiful Jim was called "the Marvel of the Twentieth Century," and his performances were witnessed by a whopping 10 million Americans. The saga is now being made into a film with Morgan Freeman as William Key, so don't expect this one to remain obscure knowledge for long.

For years, people believed that the source of the 1871 Great Chicago Fire — a tragedy that essentially burned the city to the ground — was a much-maligned animal: Mrs. O'Leary's cow. The cow was thought to have kicked over a lantern, which set its stall alight, creating a fire that destroyed most of Chicago and killed 300 people. However, recent thinking has exonerated the innocent cow, who likely didn't survive the blaze, either. An extensive investigation of the fire's source and its first witnesses in 1997 found that it was much more likely to have been caused by a man called Peg Leg Sullivan, and the evidence was so convincing that the Chicago City Council posthumously exonerated by Mrs. O'Leary and her unfortunate bovine of causing the tragedy.

More like this
6 Organizations Fighting Police Brutality That You Can Support Right Now
By Syeda Khaula Saad and JR Thorpe
25 Inspiring Quotes From Black Women To Celebrate Black History Month
By Kyli Rodriguez-Cayro and JR Thorpe
How To Turn Off TikTok Profile Views So You Can Stalk Other Accounts In Secret
By Alexis Morillo
19 Instagram Captions For Celebrating Black History Month
By Ayana Lage
Get Even More From Bustle — Sign Up For The Newsletter
From hair trends to relationship advice, our daily newsletter has everything you need to sound like a person who’s on TikTok, even if you aren’t.