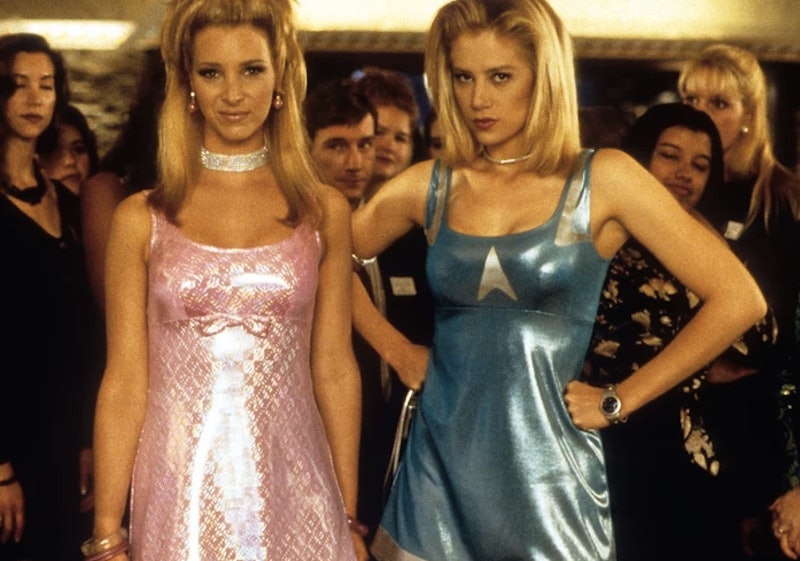 Everyone has their favorite fashion era — mine's glam rock, in case you were wondering — but for most of my generation, I think it's safe, and kind of obvious, to say that it was the decade of our youth. The most iconic '90s dresses are still fresh in most of our memories, both from the red carpet and in the films that shaped us. And really, it's easy to see why everyone adores this decade in style. (Especially considering it was followed by the early 2000s, which were a fashion disaster for all involved.)

Although '90s fashion may not be my favorite, that doesn't mean I can't appreciate some of the best looks of the era. After all, the '90s housed a hell of a lot of iconic aesthetic decisions. Lil' Kim's mermaid outfit, for example, is an ensemble I will remember even on my deathbed.

The iconic dresses of the '90s were either barely-there or stood out in a crowd of barely-there dresses. In other words, they were minimalism perfected, or over-the-top fabulousness. There was no in-between, and that's the reason they stood out amongst the rest. Whichever aspect of '90s style you opted for, you have to admit that these 11 celebrities and their iconic dresses resulted in the best of the best looks around.

Please, Gillian Anderson: Please reveal the story soon. I love that The X-Files queen accessorized a low-back dress with underwear. It was just the kind of accessorizing that makes us remember the look to this day.

This dress was even voted best red carpet dress of all time in 2008, and it's not difficult to see why. Safety pins? Safety pins.

This is my favorite feel-good film, and one day I'll recreate this dress and own a pair of boots that impressive.

Here are the two queens who own the '90s fashion section of my heart — Drew Barrymore and Courtney Love. But wait, there's more to Barrymore's look than meets the eye.

I bet you never knew how badly you needed a dress with mesh wings until this very moment.

This was the ultimate in '90s outfits, not just '90s dresses. It's also the only time I've ever been OK with somebody wearing a flag on their clothing.

Romy And Michele's High School Reunion isn't appreciated as much as it should be, IMO. It's up there with my favorite '90s films, mainly because of the killer wardrobes. The best examples? These two outstanding dresses, of course.

If you haven't seen To Wong Foo, Thanks For Everything! Julie Newmar, please go watch it immediately. Don't even finish this list. Just go watch it. RuPaul laughed in the face of any and all bigots in this film by not only flying in from the rafters as a Black drag queen, but by wearing a shiny Confederate flag dress.

This is probably a name you never expected to see on this list, right? But Brad Pitt's 1994 cover of Rolling Stone — and the accompanying spread — featured the actor in a way many had never seen him before: Rocking some pretty killer dresses.

This 1998 VMA look by Rose McGowan is so iconic that Amber Rose paid tribute to it on the same red carpet in 2014.

Mel: What the hell is that?

If there was ever an iconic '90s film fascinated with fashion, it was Clueless. This exchange between Cher and her daddy was one of the best bits of dialogue ever recorded in modern cinema, don't you think?

A lot of these looks are iconic because of who's wearing them, of course. I mean, if anyone other than a Spice Girl was sporting a Union Jack dress, it would have just looked kinda imperialist. Instead, Ginger Spice has made it a look recorded forever in the annals of sartorial history, alongside the other amazing '90s dresses that made this list.