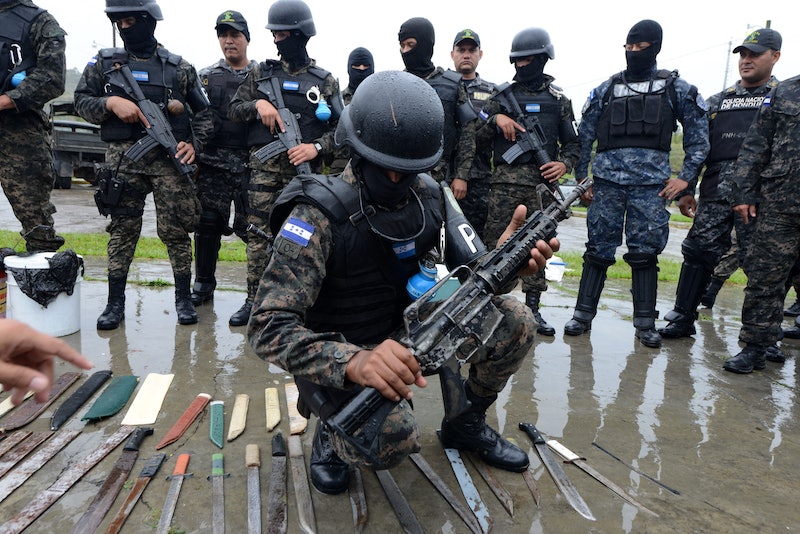 The massacre at the Orlando nightclub Pulse has recharged the national spotlight on a semiautomatic weapon known as an AR-15, a gun very similar to the one used by the killer. The AR-15 was used in the Sandy Hook massacre, the Aurora theater massacre, and the San Bernardino massacre. What's the difference between the AR-15 and the M16, a military weapon? The AR-15 is basically the civilian counterpart to the M16.

The AR-15 came first, in 1947; the M16 a decade later. They have the same magazine capacity: 30 rounds. The former is heavier, with a shorter range and slower rate of fire, but these are subtle differences. Overall, the weapons are pretty similar. Which means that, yes, a civilian can buy a basically military-grade semiautomatic weapon in (as you might have heard) about seven minutes — background check included.

The Orlando shooter bought his weapon legally. The fact that he was able to do so despite popping up more than once on federal terrorist watch lists has sparked a lot of debate, and even a potential beef between presumptive GOP presidential nominee Donald Trump and the National Rifle Association (which endorsed him in May). The NRA, in its infinite wisdom, is sticking to the argument that owning semiautomatic weapons is still the right of every member of this great nation, just as the Founding Fathers intended as they drew up the Bill of Rights over their muskets.

“The N.R.A. believes that terrorists should not be allowed to purchase or possess firearms, period,” said Chris W. Cox, the executive director of the group’s Institute for Legislative Action, in a statement. “At the same time, due process protections should be put in place that allow law-abiding Americans who are wrongly put on a watch list to be removed.”

So you probably can’t get an M16, but you can potentially get the next-best thing in less than 10 minutes for around $1,000, even if you’ve made violent threats in the past and were being monitored by the FBI.