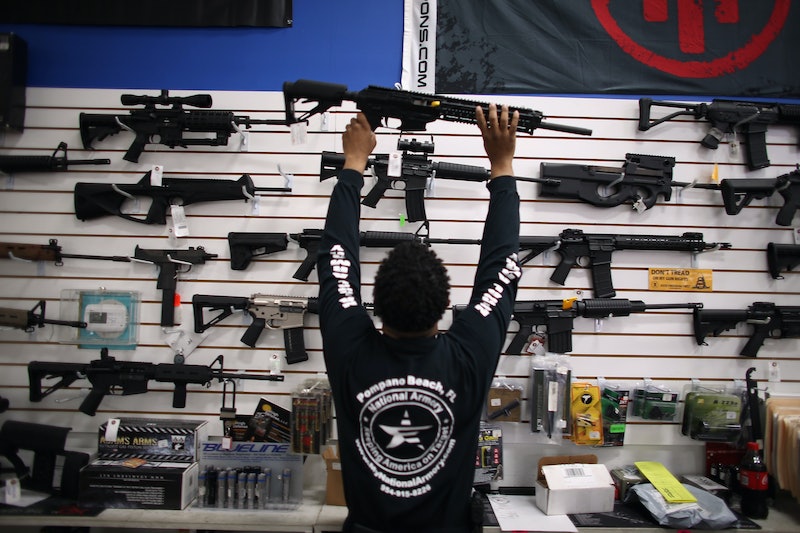 As mass shootings have become more common, an unfortunate pattern has emerged: Innocent lives are lost in a seemingly senseless act of gun violence, forcing the national conversation to turn toward gun control and Second Amendment rights. Legislation is proposed, and then nothing. The gun lobby has long exerted a powerful influence in Congress, and recent partisan divides have done little to help change years of legislative inaction in the wake of mass shootings. But now, after 49 people were killed at an Orlando nightclub in the deadliest mass shooting in U.S. history, gun control advocates in Congress are pushing back harder than ever. But who are the politicians working to advance gun control legislation?

Despite how high-profile the issue of gun violence remains, most of the 227 pieces of firearm-related legislation introduced to Congress in 2015 are going nowhere, the Washington Post reported. Gun control advocates face an uphill battle against the gun lobby's deep pockets and strong influence over many Republican legislatures. Although some of Congress' most staunch advocates for gun control have recently retired (here's to you, Carolyn McCarthy!), there are still dozens of politicians eagerly trying to push legislation calling for expanded background checks, assault weapon bans, and keeping guns away from people on terrorism watch lists. Connecticut Sen. Chris Murphy recently made headlines for his nearly 15-hour filibuster, which ended only when the Senate agreed to vote on two gun control measures. But Murphy isn't the only politician looking to advance gun control reform.

In no particular order here are 10 other politicians currently pushing for gun control reform:

Sen. Cory Booker joined Murphy's filibuster Wednesday to force a vote on gun control measures, but the New Jersey senator has long been an advocate for gun control. Prior to winning his Senate seat in 2013 (he replaced Sen. Frank Lautenberg, another vocal advocate of gun control), Booker served as the mayor of Newark and was a member of the coalition Mayors Against Illegal Guns. In 2011, he actively opposed the National Right-to-Carry Reciprocity Act, legislation that would have required states offering concealed carry permits to recognize similar permits from other states. In 2012, he called for universal background checks, improving and adding mental health data to the National Instant Criminal Background Check System, and tightening laws against gun trafficking in an op-ed published by the Huffington Post. Earlier this year, he supported President Barack Obama's executive order on closing a loophole which allowed gun purchases without a background check.

After the San Bernadino shooting last December, Sen. Dianne Feinstein proposed legislation that would prevent people on terrorist watch lists from being able to purchase a gun. The legislation was rejected in a 54-45 vote taken that same month, but has been reintroduced for another vote thanks to Murphy's nearly 15-hour filibuster on Wednesday. In 2013, Feinstein also introduced an assault weapons ban shortly after the Sandy Hook elementary school shooting. Her home state of California has some of the strongest gun laws of any state.

New York Sen. Charles Schumer introduced legislation to expand gun sale background check requirements to gun shows and online sales in May. He introduced the Brady Handgun Violence Prevention Act back while a member of the House of Representatives in 1991. The bill made federal background checks mandatory for firearm sales. In the more than 20 years since then, Schumer has continued to advocate for common-sense gun laws.

Although a firm Second Amendment supporter, Sen. Claire McCaskill has urged Congress to pass a ban on assault weapons and has hinted that magazine sizes should be limited since the Sandy Hook shooting in 2012. She voted for tighter background check regulations in 2013 and joined Sen. Murphy's nearly 15-hour filibuster in the Senate on Wednesday to read a voicemail left by a teenage constituent concerned about gun violence. She co-sponsored Sen. Feinstein's Denying Firearms and Explosives to Dangerous Terrorists Act of 2015, which seeks to keep people on suspected watch lists from being able to legally purchase guns.

When the House of Representatives decided to hold a moment of silence for the 49 people shot and killed at a nightclub in Orlando, Rep. Jim Himes walked out in protest. "If the House of Representatives had a solitary moral fiber, even a wisp of human empathy, we would spend moments not in silence, but screaming at painful volume the names of the 49 whose bodies were ripped apart in Orlando, and the previous victims and the ones before them," Himes said. It was a powerful and emotional statement aimed at shaming the House for its inaction. The Connecticut Representative is leading the charge to change how Congress talks about gun violence in an effort to change how Congress votes on gun control. Himes told Time magazine he hopes "calling people out in more moral language" will help "break through the noise" of the gun lobby and push legislation through.

Sen. Barbara Boxer has been advocating for gun control since the '90s and her efforts have helped to make California one of the strictest states in the country when it comes to gun legislation. In 1996, Boxer lobbied hard to ban the sale and manufacturing of cheap handguns known as Saturday Night Specials or "junk guns." She urged Congress to pass a ban on "military-style" weapons (they didn't) after the San Bernadino shooting and has consistently supported common-sense gun regulations. After more than 20 years in office, Boxer announced she would not seek re-election at the end of the year.

In 2000, Sen. Jack Reed introduced the Handgun Safety and Registration Act, a bill that if passed would require the registration of handguns in the National Firearms Registration and Transfer Record and place a $5 transfer tax on handguns and a $50 tax on handgun manufacturing. The bill was tabled, but Sen. Reed has been pushing for expanded background checks, strict gun trafficking laws, and closing legislative loopholes in gun sale laws since then.

This New York senator wasn't always an advocate for gun control legislation. While still a Representative in the House, Sen. Kirsten Gillibrand vowed to protect Americans' Second Amendment rights and was rated favorably by the National Rifle Association. Meeting with the families of gun violence victims (and a little political pressure), however, spurred Gillibrand to change her tone on gun laws when she entered the Senate. Early in her Senate career, Gillibrand introduced the Gun Trafficking Prevention Act of 2009, and, more recently, she introduced the Hadiya Pendleton and Nyasia Pryear-Yard Gun Trafficking and Crime Prevention Act, which aims to make trafficking illegal firearms a federal crime. She has also supported increased research on gun deaths.

Sen. Pat Toomey stands out as one of the few conservative Republican lawmakers in support of gun control reform, although he's not always as far to the left as Democrats might like. He caused quite a stir in Washington when he introduced a bipartisan bill on background checks with Democratic Sen. Joe Manchin in 2013. The bill stalled in Congress. Although Sen. Toomey told the Washington Post he's not ready to support legislation from Sen. Feinstein which denies firearms to anyone on a terrorist watch list, he has also voiced dissatisfaction with the alternative legislation proposed by Republicans, claiming it doesn't allow the attorney general the opportunity to "make a case against someone who is actually a terrorist." He's currently working with gun control group Everytown for Gun Safety to craft legislation aimed at keeping guns out of the hands of suspected terrorists.

A mass shooting that killed 12 people at the Washington Navy Yard spurred Sen. Richard "Dick" Durbin to force the Senate into renewed debate over federal gun laws in 2013. He urged common-sense measures (like the Toomey-Manchin proposal) that would keep people with a history of mental illness from obtaining a gun. Durbin has continued to advocate for common-sense gun laws, including closing a loophole which allows guns to be bought sans background check at gun shows and through online retailers. He stood with Murphy during the Connecticut senator's filibuster to talk about assault weapons and how roughly 40 percent of gun sales are conducted legally without a background check thanks to a legislative loophole.