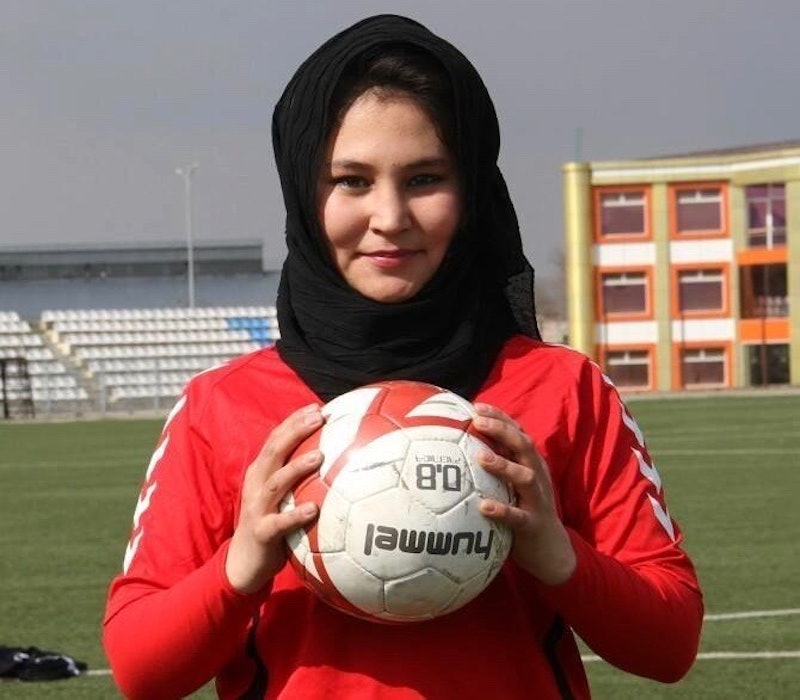 It was a cold November afternoon, in 1999; thousands had gathered in Ghazi Stadium in Kabul after the Friday prayers. A mullah stood at the center of the ground and announced the executions of the day. It was a common practice to bring those convicted by the Taliban courts onto the stadium grounds for public executions. With most sporting activities banned under the Taliban regime, soccer fields were used for carrying out capital punishment.

On this particular day, it was a woman who was convicted for the crime of murdering her abusive husband, slated to be executed by order of the courts that found her guilty. Zarmeena, as she was later identified by several media outlets, was brought to the center of the stadium, covered in a sky blue burqa, and shot in the head as men, women, and children looked on.

Fast forward to 2007. Young Afghan girls take to a similar Kabul stadium in their new sports gear for their first soccer match, one that they have been training for months for. "We won that match against International Security Assistance Force (ISAF) women's team 5-0. But more importantly, we had started something new in Afghanistan," says Hajar Abulfazil, a 23-year-old Afghan who is among the first generation of female soccer players since the fall of Taliban in 2001. There are now 1050 registered female soccer players in Afghanistan, mainly from six provinces of Bamyan, Ghazni, Jowzjan, Balkh, Herat, and Kabul, as well as localized soccer clubs for women; in Kabul alone there are 22 clubs that play against each other.

But despite the fall of the Taliban, it still isn't easy for women in Afghanistan to choose to participate in sports. Cultural and religious norms encourage women into traditional roles where they play homemakers rather than soccer, and societal pressures continue to bully women who dare to step out of defined boundaries. And so, Abulfazil was terrified of approaching her parents for permission to play soccer, lest she be rejected, or worse, lambasted for wanting the unconventional.

"I was 14 when I first enrolled into the women's team at my school with a little encouragement from my teacher who saw my interest in the sport," she tells Bustle. "It took me a lot of courage to approach my father with this request. But when I eventually did tell him that I wanted to play soccer, he was overjoyed," she recalls. "He took me by my hand and we went to the sports store to shop for soccer gear. At the shop, he told the store manager to give me the best of everything that a soccer player might need. It was the happiest day of my life."

However, despite her parents' approval and support, the journey wasn't without its fair share of challenges. As Abulfazil started to play in the leagues, it became more difficult for her and her family to keep up the optimism. "My uncle strongly disproved [sic] of my sports activities. He said I had brought dishonor upon the family and that he felt ashamed every time he heard my name on the radio or during national games," she says. "He often ordered me to not play. And once, when he was visiting our house, I had to sneak out through the window to go play a match so as to avoid his criticism," she adds.

"I know several co-players who quit the games after incessant criticism and social humiliation ... But there are also many others I know who continued to play discreetly, even after physical abuse, all for the love of the game."

That hasn't stopped her from playing internationally in several popular championships, including the South Asian Football Federation (SAFF) in 2010 and 2012. The Afghan women's team has played three times in SAFF tournaments, with some success. "We lost in 2010, but in 2012 we tasted victory. We won 4-0 to Pakistan, and drew 1-1 to Maldives," Abulfazil says. "In another friendly match with Qatar in 2011 we won 2-0. Apart from these, we've played several international games in Norway, Germany, Sri Lanka, India, Qatar, Jordan and others. We lost some, we won some."

Of course, not all Afghan women players have the support of their immediate families like Abulfazil does. In fact, the toughest challenge a lot of them face comes from within their own homes. "I know several co-players who quit the games after incessant criticism and social humiliation," she says. "But there are also many others I know who continued to play discreetly, even after physical abuse, all for the love of the game."

One of the most common criticisms of the women's soccer team in Afghanistan comes against their outfits. The sports jerseys are often considered too immodest and not suitable for women to wear. (Most women in Afghanistan cover their head at all times, which makes it exceptionally difficult to play, with the hijab sometimes slipping or blocking vision.)

"Dressing up for a game is a little [more] difficult for us than it would be for most female players from Western countries. Our attire has to be culturally sensitive, and over the years we've become habituated to playing with the headscarf on," Abulfazil says. But a couple of months ago, a Danish sportswear firm came to the rescue of Afghan women soccer players with their new design for a soccer uniform with an integrated hijab that allows women to play while still being covered head-to-toe.

But there are other obstacles as well: Abulfazil says a lot of women stop playing sports in Afghanistan after they're married, often due to unsupportive in-laws. But Abulfazil says she's determined to stay involved in the sports for as long as she can. "Even if for some reason I am unable to play after I marry, I was continue to support younger women players in whatever capacity I can."

Currently, she coaches the under-17 squad of the Afghanistan National Women's Football Team, in addition to her own soccer practice and medical school — and she feels hopeful for the future. "There are more Afghan women who want to play sports now than there were a few years ago," she says. "Largely because of media ... that has allowed Afghans the exposure and education, and normalizing, to an extent, the idea of a female sportsperson."

However, despite an increasing number of Afghan women taking up athletic activities, there continues to be dearth of infrastructure to support their ambitions. "In the whole of Kabul there is only one gymnasium that [is] available for free for girls to practice at. Most families can't afford to fund sports education for their daughters, even if they want them to play," Abulfazil says.

It is an issue that Abulfazil feels so passionately about that she voiced her opinions at the recent Youth Assembly at the United Nations, where she was part of a delegation from Afghanistan. "I want to raise awareness and funds to create more spaces for women to pursue sports in Afghanistan. We need this." She enthusiastically shares her proposal for a women's-only sports facility with anyone who shows any interest.

As someone who lived in Iran and Pakistan as a refugee during wartime in Afghanistan, to Abulfazil, being Afghan has never been without its challenges. "We are generation that grew up knowing war — news from Afghanistan was dominated by stories of killing of people, killing of women, death, and destruction," she explains. "We grew up with very little confidence towards Afghanistan."

And yet, today, Abulfazil could not be more proud of being Afghan. "There are challenges that I faced, both in and out of the pitch, and have come out of them much wiser. I have come to realization that I have the power to change how people look at Afghanistan," she says. "Soccer has been my teacher. I feel like it has not only helped me, but also my family, to grow and be better people. In a soccer pitch, I feel complete."