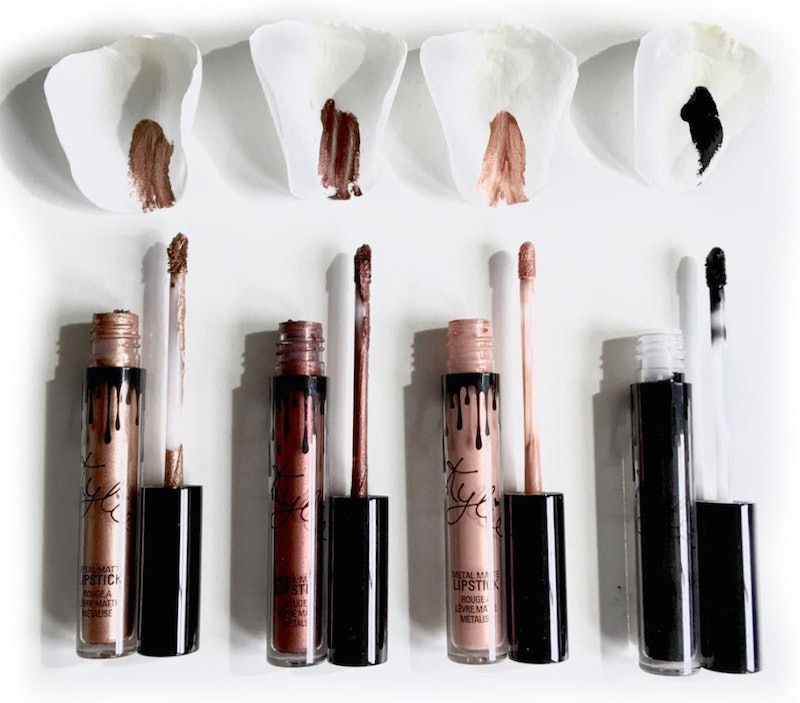 She just gave us two black options with the matte Dead of Knight Lip Kit and the shimmery KyMajesty Metal Matte. Now, Kylie Jenner is dropping two new Lip Kit colors next week. OMG, right? The makeup mogul is going for it by adding two more shades to her collection of mattes, which currently includes 22, Candy K, Dead of Knight, Dolce K, Exposed, Koko K, Kourt, Mary Jo K, Posie K, and True Brown K. Jenner confirmed that she will drop a pair of new Lip Kit shades next Friday, June 24 via Snapchat. She chose that date so that her fans and kustomers will be able to paint their pouts with the new hues before the Fourth of July holiday. Huzzah.

Could we be getting a white or a blue shade to go with the patriotic holiday theme?!

I personally watched the Snaps in which Jenner teased the shades and the drop date. The Kylizzle Snapchats Instagram also posted those four videos, including a shot of the packaging obscured by a black and white filter. It's a true tease.

I peeped Jenner's app and website, which serve as the Lip Kit info hub. There was no "new" news posted as of press time. Of course we will keep you updated about these new Kylie Lip Kit shades.

Watch the videos of the reveal below. Try not to freak out too much! Just use your time wisely to wonder which shades she will tackle next.

Jenner shared that she has two colors she wants to release "next week."

Here, she joked that it might be too much if she releases them next week for the holiday, which is likely due to the fact that she just dropped DoK and KyMajesty. Oh, Kylie. You are sooooo koy.

"Fun" and "exclusive." That's how she described the shades.

In this Snap, Jenner stated that she will "probably" drop the new KLKs on Friday, but promised to show them to her fans "before then." Expect more social media teases.

Judging from the dripping lips graphic, there could be a dark and a light shade on the way.

The Kylie Cosmetics empire continues to expand exponentially. There's no stopping or containing her.

Will we finally get a Kendall or a Kim Lip Kit? Or maybe a Kris? She hasn't named her KLKs after any of those family members yet.