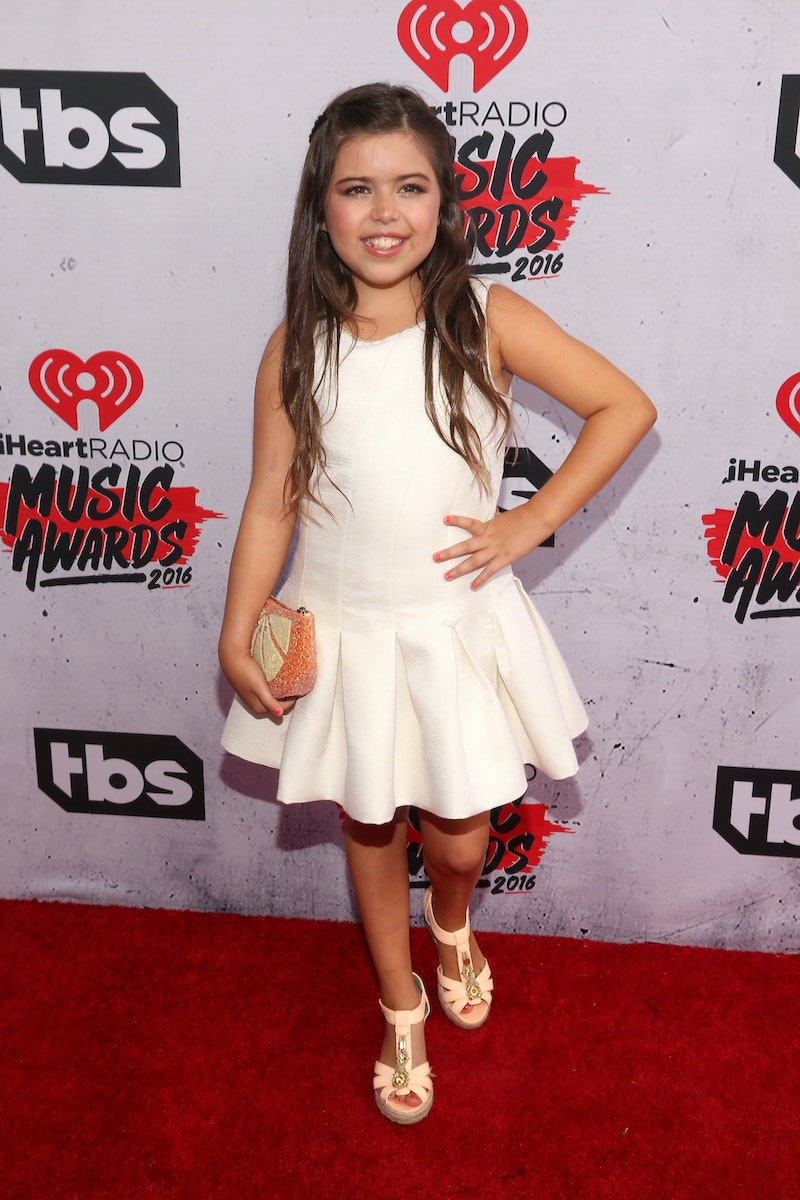 Sophia Grace, once a pink tutu-wearing mini diva rapping Nicki Minaj on Ellen, is not the same little girl anymore. Get this — that little dancing and singing peanut who went viral all those years ago is already 13. She’s a teenager and I’m feeling ancient. But in just five years, she’s done lots of growing up and is now sending messages wise beyond her years to young girls everywhere with her song “Girl in the Mirror” featuring Silento. She’s embraced her talents, which have led her to red carpets as a correspondent for Ellen (when she posed with stars like Gigi Hadid and Katy Perry), has traveled the world and has a YouTube following of over 1.4 million subscribers. This 13-year-old has more experience than some of us do in our pinky. Still, she knows she has a way to go and luckily has some boss ladies in the biz she continues to look up to.

When sitting down with this YouTube queen in the making just days after the release of her new single, she admits a career in the spotlight wasn’t a pre-determined path for her. “Well, I didn’t always [want to be a singer],” she admits. “I’ve always sung. My parents noticed that I had quite a good voice, but when I was younger I didn’t even think about being a singer when I was older.”

Maybe she didn’t always belt Celine Dion to the mirror using a hairbrush as a microphone, but as for considering a future as a singer, she says nonchalantly, “I guess I probably will be now.” Even though she is already a teenager, the public still may see her as the little girl she once was when hanging with Ellen. Admittedly, I was included. But while acquiring this mature voice in recent endeavors, she won’t let that get in her way.

It’s definitely hard. Because people still assume that I wear pink and tutus and, no I don’t ‘cause I'm 13 now, I’ve grown up and I’ve changed. And people just kind of have to accept that.

When in doubt, she has fellow, older female stars who have paved the way, allowing Grace to follow in their footsteps. She says her greatest role model would be “someone like Beyonce or Ariana Grande,” and says how she admires their multi-faceted talent. “Someone who’s multitalented, they can dance, they can sing and they can act. It’s really great,” she explains. “’Cause I’d love to. I can act and sing and dance, but yeah. I’d love to be like them when I’m older.”

But her main chick, understandably so, is Ari. She says if she could collaborate with anyone, it would be the pop princess. “I really like her. She has such a good voice. I’ve met her a couple of times. She’s really nice, she was lovely,” she says. If given the chance to meet the star again, Grace says she would tell her how talented she is and that “[she’d] love to work with her in the future.”

Becoming the next Ariana Grande isn’t so far-fetched, especially when singing about such empowering, adult topics. She's already getting attention as a pop princess herself, and was even called a “mini Meghan Trainor” recently by Perez Hilton, who praised her for her new song. Check out the beginning lyrics:

You're too short, too fat, too skinnyHey, well excuse me if I think that I'm pretty

Trainor’s “take me as I am” mentality has positively influenced women everywhere, and it’s wonderful to hear similar notions coming from a 13-year-old. I mean, who wouldn’t love to be compared to the “All About that Bass” queen? “It’s great because she’s really famous and got a really good voice, she’s really talented,” Grace says of the Meghan Trainor comparisons. “It’s really cool that I’ve been compared to her.”

Not only is she tackling body image at her age, but she’s taking the reigns of running her empire, just as the stars she looks up to do. Pleasing millions of followers on YouTube on a daily basis, for example, can’t be that easy. “I have to upload videos every week and I try my hardest but I’m always quite busy, so I find it hard,” she says. “Everyone’s always saying, ‘Oh can you do this video? Can you do that video?’ and obviously when I have the time to, I’ll do the video to make them happy.”

She’s embracing the hell out of it, too. She had so much fun shooting her “Girl in the Mirror” video, she says she lost her phone during it. In fact, Ari and Bey may have to watch out for the rising star. “I’m definitely gonna be having more music coming out this year, my album is coming out,” she says. “It’s a mini album it only has about eight songs on it. You should expect lots of more music videos and songs and videos coming out.”

She’s not playing around, guys. Now the next thing we all need is a Sophia, Bey, Ari and Meghan collaboration. One day.