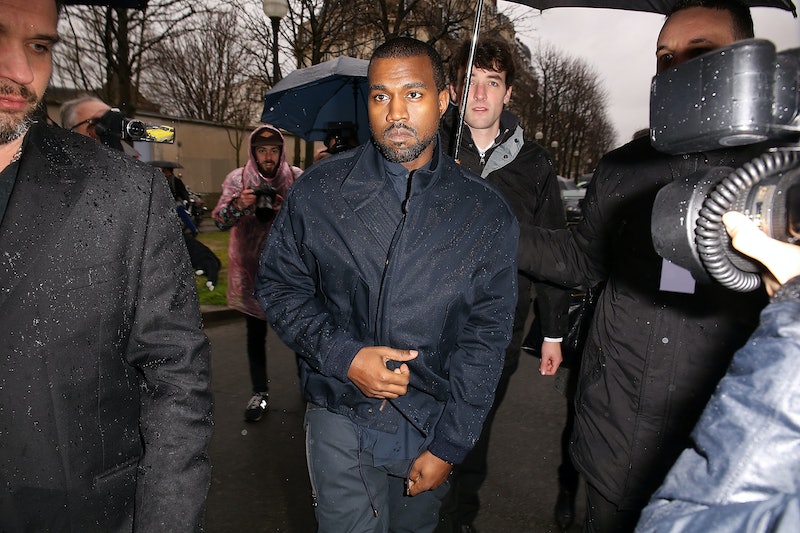 It looks like the Yeezus Tour is getting the concert film treatment. Kanye West posted a trailer for a Yeezus film on his website with no explanation other than the caption, "Yeezus film directed by Hype Williams coming to theaters." On second thought, that is a pretty damn good explanation. A Yeezus film, directed by Hype Williams, is coming to theaters. It seems obvious that this is going to be footage from West's tour, not a documentary about changing North West's diapers. The trailer looks like a Kanye West concert meets the "Bound 2" video meets a sacrificial ritual meets a Givenchy runway show.

The film's director, Hype Williams, is most well-known for his music videos including the nineteen which he directed for West. Williams and West paired up for "All of the Lights," "Gold Digger," and "Stronger." Williams also directed videos for TLC's "No Scrubs," Coldplay's "Viva La Vida," and Beyoncé's "Drunk in Love," among many, many others.

Kanye West has a well-documented hatred — well, maybe not hatred, but a complex relationship with the media. On Tuesday while a guest on Late Night with Seth Meyers, he voiced his opinion on cameras saying that he doesn't like them, but appears on television shows because, "I care about history. I care about people. I care about you guys getting the best product possible."

Expect these sentiments to continue as information on the Yeezus film comes out. I have no doubt that West will say something about wanting the control in his hands, so he took it upon himself to make a film with his own perspective. Also, don't be surprised if he describes it as, "the best concert film ever." It very well might be. It also might not be, but West won't be worried about that option.

More like this
Kim Kardashian Father’s Day Tribute To Kanye West Called Him “The Best Dad”
By Stephanie Topacio Long
Photos Of The 'Elvis' Cast vs. Their IRL Counterparts Will Have You All Shook Up
By Grace Wehniainen
Taylor Swift's “Carolina” Theme For 'Where The Crawdads Sing' Soundtrack Is Here
By Jake Viswanath
What Is Elvis Presley’s Net Worth? How The King Earned & Spent His Fortune
By Grace Wehniainen
Get Even More From Bustle — Sign Up For The Newsletter