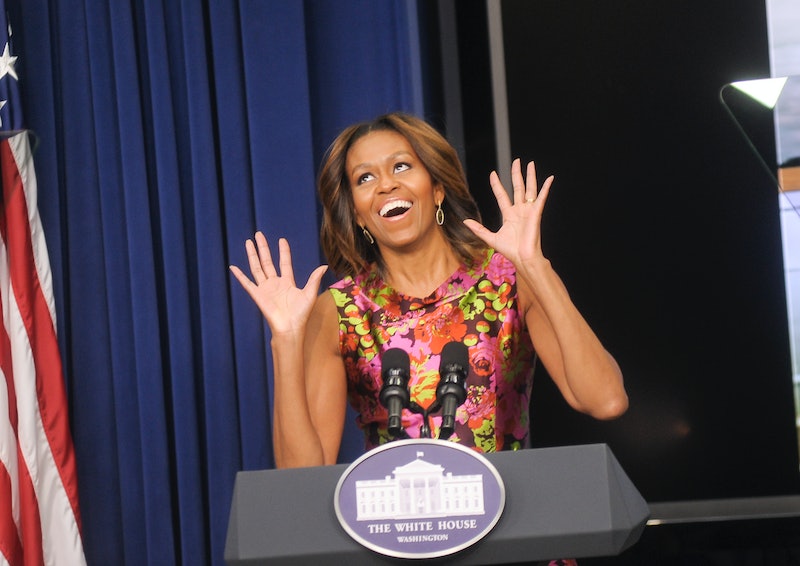 It's time to move, Pawnee! And I don't mean literally move out of Pawnee, just maybe get up off the couch for a minute because the First Lady of the United States of America herself, Michelle Obam a will be on Parks and Recreation this year. Holy Knopesicles: Pawnee's finest is rubbing elbows with all of the political power players these days, isn't she? First came John McCain, then came the White House (in the form of America's Uncle/Vice President Joe Biden)! Not too shabby for a deputy director from smalltown, USA.

Not much is known about the episode beyond its title, but there's plenty to be deduced from that. "Moving Up," both a nod to Leslie Knope (Amy Poehler)'s hopeful trajectory following her ousting from city council and Obama's "Let's Move!" campaign to end childhood obesity. Could it be that Knope and Co. will join the crusade? Dance to some Beyoncé with Michelle? And more importantly: Will Larry/Jerry/Gary Gergich be there to ruin everything?

Needless to say, we're excited for so many reasons and positively pittering over what will be next for our dear, dear Leslie Knope. Considering what she's gone up against in her fight to beat Pawnee's own obesity problem, we're certain FLOTUS is going to have her work cut out for her:

The episode, which was shot in Miami in "late February" (so...today? Yesterday? Right now?) will actually be the one-hour season — emphasis on the SEASON part — six finale, slated to air on Thursday, April 24 at 8PM.