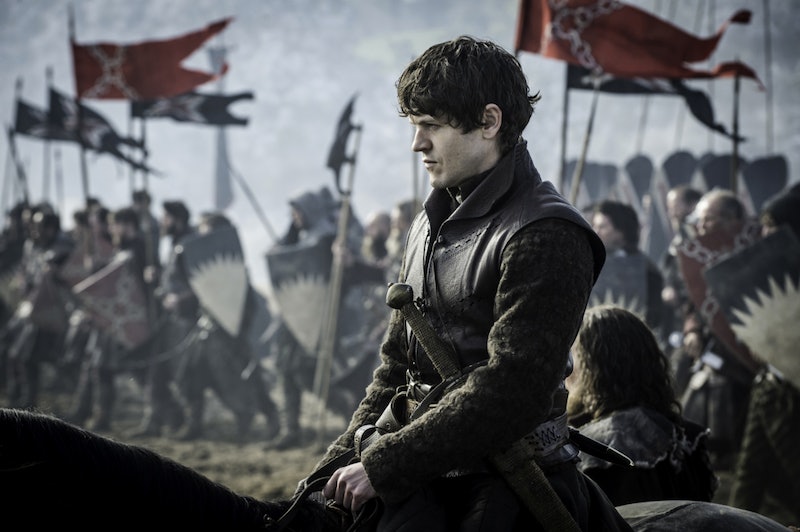 On the day of the highly-anticipated "Battle of the Bastards" episode, Game of Thrones fans who have kept up with the series are all currently experiencing a combination of terror, excitement, and concern. Season 6, Episode 9, is bound to bring out shock and horror among viewers, as if we've learned anything in Westeros, it's that our favorite characters are probably going to die — and "Battle of the Bastards" could bring out some of the most heartbreaking moments yet. The anticipation for the "Bastard Bowl" is great, and Game of Thrones fans' "Battle of the Bastards" tweets and memes show just how nervously excited people are to watch this latest episode.

After all, during Sunday's installment of GoT, the fight for Winterfell will come to a head. It's going to be Stark and Snow (minus quite a few men) versus Bolton, in a quest to rescue Rickon Stark and take out the most evil guy in town. From hopeful, to anxious, to straight up ready to rumble, fans the world over are sharing their opinions and fears for "Battle of the Bastards" in the most humorous ways.

That is some serious excitement.

2. The Fan Who's Invoking GoT Deities

Hey, why not give it a shot?

3. The Fan Displaying Some Great Art

I too would pay a lot of money to watch this episode, if I weren't just watching on HBO.

4. The Fan Still Trying To Theorize

5. The Fan Calling Out The One Dude Who Should Help Sansa

No, but seriously, if Littlefinger misses this, he's so dead to me.

6. The Fan Who Truly Understands The Gravity Of The Situation

No offense to all the above superheroes, but I (and apparently Drake) have so many more feelings about Jon Snow than them.

7. The Fan Reaching Across Genres For Stark/Snow Supporters

With Homer Simpson by their side, nothing can go wrong. Right?

8. The Fan Who Recognizes The True Hero

Seriously, Davos Seaworth holds it down. HIs hopefully-not-imminent death would be a tough one to take.

9. The Fan With On Point Puns

Get it? The "right" bastard?

10. The Fan Summing Up The Hype

That hype is off the charts.

11. The Fan Bringing Up A Forgotten Character

It would be really cool if Ser Pounce, Tommen's cat who was last seen in Season 4, could bite at Ramsay's ankles or something to distract the evil dude.

12. The Fan With Cool Drawn Predictions

I think we can all get behind these comic book-style predictions. Get it, Ghost.

13. The Fan Who, For Some Reason, Is Betting On Ramsay

I don't understand you, but I respect you.

How does one get that many abs?

15. The Fan With The Serious Photoshop Skills

16. The Fan With The Cute Little Figurines

How does one get some of those little cuties? What a wonderful way to re-enact some of the good (and hopefully not Stark-deadly) scenes.

18. The Fan Who Fears For Their Own Life

Just take deep breaths and drink water. It will be OK.

19. The Fan Who Has Their Priorities In Order

One doesn't even need to be able to read Spanish to understand these feels.

20. The Fan Who'll Remind You Of The Inevitable

Straight from the mouth of Mr. Bolton, we are reminded that GoT so rarely gives a happy ending.

21. The Fan Who Says What We're All Thinking

Grab your comfy pillows and your tissue boxes, because tonight's episode is going to be a toughie.