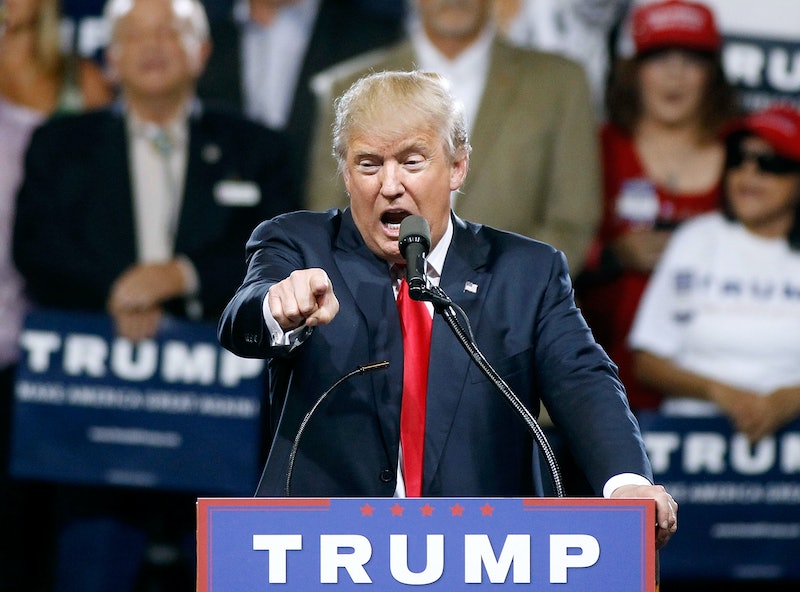 After a full year of campaigning, it's surprising that anything Donald Trump says can still be so shockingly stupid and ignorant, yet here we are once again. According to the Donald, it's "not nice" to call women "tough," which Trump mansplained to former Arizona governor Jan Brewer at a rally in Phoenix on Saturday. "She's an amazing person," Trump said to Brewer, who stood in the VIP section of the crowd. "And, you know, it's not nice to say about a woman, but you are tough. Aren't you? Huh? She is tough. She's smart."

Aside from Trump's irritatingly small lexicon (possibly related to his tiny hands?), the statement should be enraging for any feminist. Of course you can call a woman tough, femininity is not synonymous with daintiness. It's incredibly demeaning to genderize the positive connotation of that word and make it inaccessible to women for no other reason than a misogynistic world view. Maybe this is why you're polling at record breaking lows with women, Donald.

A rep from the Trump campaign stepped forward almost immediately to insist that he didn't mean what he said. When asked why it wouldn't be nice to say that a woman is tough, the spokesperson replied with this comment: "[Brewer is] tough and she's smart and she was a great Governor of Arizona." Of course, as John Oliver so brilliantly pointed out, this should be a direct warning to anyone who supports Trump because of his supposed verbal bravery.

Trump backed down from the statement, which shows that he is at least somewhat cognizant of how it would likely be, and ultimately was, received, but this actually isn't the first time he said that women aren't tough. During an MSNBC interview in March, Trump said that he believed women were put off by his "tough" tone. "In order to be victorious, frankly, I had to be very tough and I had to be very sharp and smart and nasty," said Trump. "And I can see women not necessarily liking the tone, but I also had to get to the finish line." Trump also promised in the interview that his tone would soften once he reached that finish line, and yet, nearly a month after being announced the presumptive nominee, Trump has yet to change his degrading rhetoric.

Trump once again revealed his true colors through this comment, and they're predictably ugly. Even as Trump continuously states that he will be a good leader for the country, he continues to divide it. Without a clear understanding of how to bring the country together, including avoiding statements like that one, Trump can't really lead the U.S., only tear it apart.