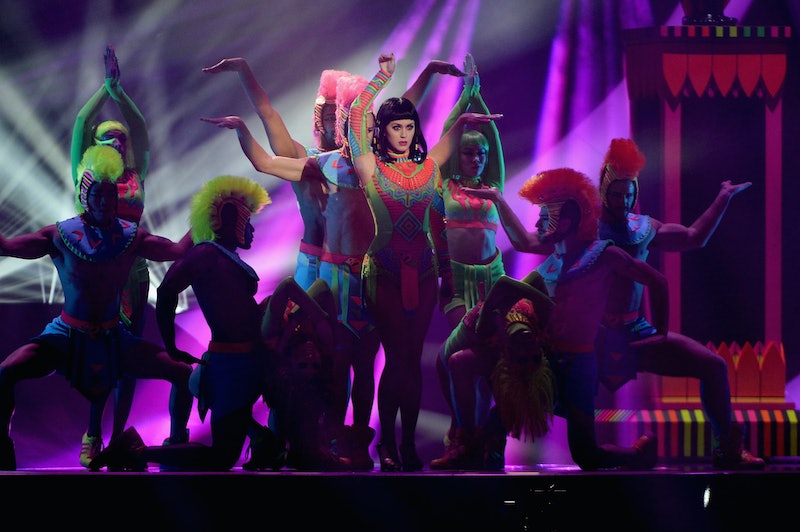 Less than a week after its release, the music video for Katy Perry's recent single "Dark Horse," feat. Juicy J, had already come under controversy — specifically, accusations of blasphemy. On February 25th, a young man named Shazad Iqbal posted a Change.org petition, demanding that the video be removed from YouTube for a shot in which a man wearing a pendant bearing the Arabic word "Allah" is "engulfed in flames." Today, with the petition over 65,000 signatures strong, Perry's team altered the YouTube version to remove the pendant (in a rather basic Photoshop swipe) — a victory for those who agree with Iqbal's assertion that "using the name of God in an irrelevant and distasteful manner would be considered inappropriate by any religion."

Of course, blasphemy is nothing new to music videos — see: Madonna's "Like a Prayer," or its later, less successful aping in Gaga's "Alejandro." Heck, Nirvana won two MTV Video Awards in 1994 by putting a Santa hat on a crucified Jesus in their clip for "Heart Shaped Box." Still, the issue with Perry's video seems not only to be her imagery's religious implications, but also the crude an incidental way the pendant is incorporated — as an afterthought, just one more piece of set decoration to make the whole ordeal more "exotic."

Set in "Memphis, Egypt, a crazy long time ago" according to its opening titlecard, Perry's video presents a slightly bugged-out technicolor dreamscape (reminiscent of, though drastically paling in comparison to, work by Scottish video artist Rachel MacLean) packed wall to wall with "Ancient Egypt!!!"-y caricatures — e.g., pharaoh headdresses, 90-degree-kinked writsts, ankhs out the yang. One by one, suitors attempt to win over the fickle bethroned singer, Prince Ali-style, and when they inevitably fail, she magic-lightnings them into dust — and their jewelry with them.

The premise is clearly supposed to be Zany, as Perry's cartoonish pouts convey perfectly well, and the surrounding props back her up: 20th-century bling bounces uncensored off the suitors' chests as they court her with fuzzy-dice-bedecked carriages, pyramids of Twinkies, and a giant bowl of what appear to be Flamin' Hot Cheetos. (There are also sneakers and stripper poles at one point — your guess is as good as mine.) That's all well and good, sure, but the problem is that, in establishing the "Y'know — Egypt!" backdrop off of which to juxtapose all these modern trinkets, Perry's design team created a pastiche of only the hastiest, most rudimentary stereotypes. In this way, a holy symbol is reduced to "a necklace in, like, Arabic or something," meant to give the scene "a more Middle East feel." And religious or not, there's no way to spin that kind of flippant styling than as plainly, stupidly insensitive.

Perry's no stranger to this sort of controversy either: Her "Geisha-themed" AMA performance last November drew boos and "check yourself"s from just about every corner of the Internet. You'd think she'd know better by now, right? Because honestly, you have to ask yourself: Why Egypt? Nothing in the lyrics call for it, per se. In fact, toward the beginning of the song, she implores the listener to "Make me your Aphrodite," who is Greek. If the answer is, "Because she just likes Cleopatra eye make-up, dude," then fine, but it's still not right, at least not as executed. Navigating the ins and outs of cultural appropriation vs. appreciation can be tricky — and at this point, given her track record, I think the golden rule for Perry is "Maybe just don't." Best to continue bastardizing gothic imagery like she did at the Grammys. At least that performance included, y'know, an actual dark horse.