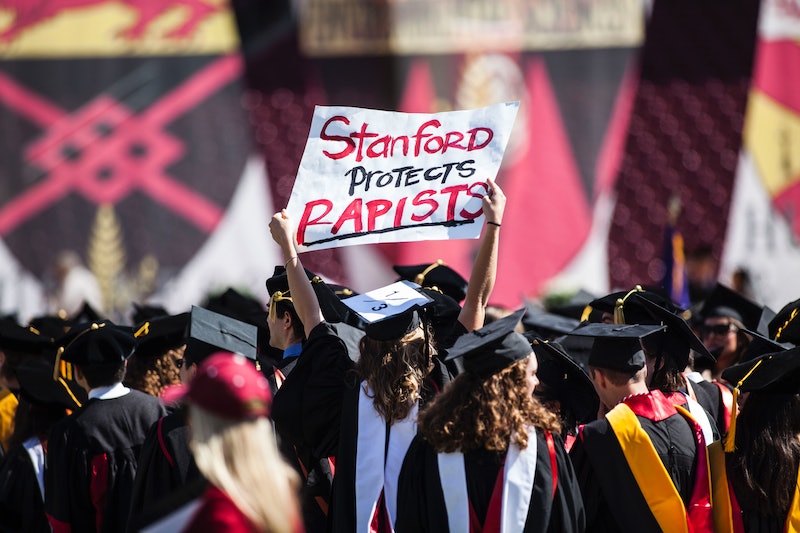 In the latest installment of updates to the Stanford rape case, the judge who sentenced convicted Brock Turner to a light punishment is in some serious heat. These updates on Judge Aaron Persky reveal that he might be recalled sooner than you think.

After the California judge made his determination — that Turner would serve only a six-month sentence in a county jail, along with three years of probation and lifetime registration as a sex offender — more than 1.2 million people signed a petition calling for the judge's removal from his post. Since the contentious June 2 sentence, in which Turner received a light punishment for sexually assaulting a woman behind a dumpster, the group leading this recall campaign has raised more than $90,000 for this cause.

But actually getting Judge Persky recalled is no easy task. The names on the petition carry absolutely no legal weight, and the more substantive efforts to have the judge discharged require much slower processes. As it turns out, it is an arduous undertaking to remove a judge in California: a total of 58,634 registered voters would have to sign the petition being carried out by this group. And even after they obtain the required number of confirmed signatures, the group would then have to convince voters to actually go through with the recall and remove Judge Persky. It doesn't sound like much, especially considering the outrage and California's population, but recalls are rare, and getting a recall on a ballot is very difficult.

Even so, Michele Dauber, the Stanford law professor heading the Judge Persky recall campaign, is not losing hope.

The judge was also removed from a subsequent sexual assault case in the wake of the Stanford ruling. The nature of the case is similar to the Stanford case in that a male nurse is facing allegations for sexually assaulting an anesthetized woman.

Judge Persky followed both the law and the recommendation from the probation office in the Stanford case, according to prosecutors and defense attorneys. Others, like the district attorney, viewed the ruling as far too lenient. Turner initially faced at least two years in state prison until Judge Persky adhered to a probation report recommendation and found grounds to sentence Turner to his current sentence instead. In this decision, the judge took into account 20-year-old Turner's youth and lack of a criminal record as "unusual circumstances," which warranted leniency. He is still receiving heavy criticism for his ruling, as well as these various calls for his resignation or removal.

The $90,000 raised toward Judge Persky's removal will aid in the efforts for now by getting this petition off the ground, if nothing else.