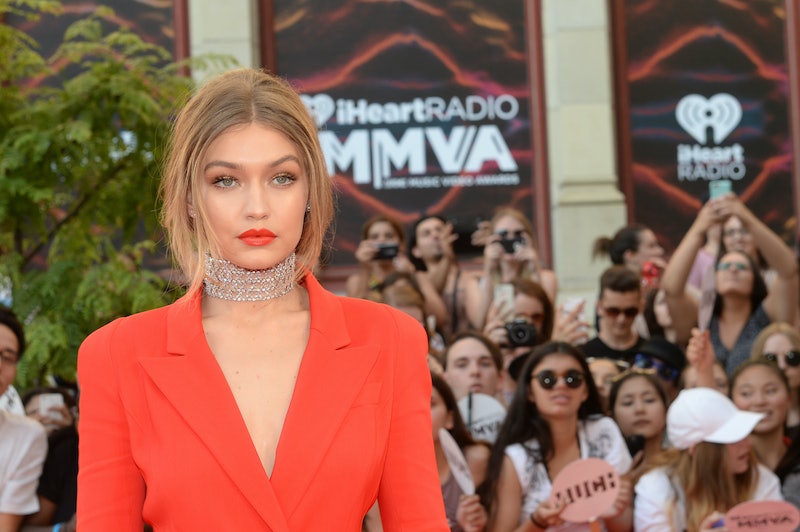 Red hot! Gigi Hadid wore an orange x red lipstick and pantsuit on the red carpet of the 2016 Much Music Awards. The supermodel served as a host of the event and her megawatt mouth matched her ensemble. It was a total va va voom moment. Hadid's burnt orange pout could become the lip color of the summer that carries into fall. It's that universal and head-turning. What exact lipstick did Hadid wear to the MMAs? Well, it's actually a custom combo of two shades, both of which are readily available. That means you can copy her not-too-red and not-too-orange but perfectly pouty lip look easily.

Since Hadid is a Maybelline spokesmodel, it should come as no surprise that she is wearing a mashup of two Maybelline lip colors for this look. According to a press release Bustle received via email from the Maybelline PR team, Hadid's makeup artist Patrick Ta mixed Orange Danger and Smoking Red lipsticks from Maybelline's Loaded Bolds collection. Both dreamy 'n' creamy hues are available online now, with nationwide availability coming in July.

Hadid rocked a clean yet contoured face, along with bronzy eye makeup, neither of which competed with that adventurous, pop of color on her pucker.

Witness Hadid and her high-impact pout below.

It's certainly one of the model's most memorable lip looks in recent months. That choker, though! That's my favorite element of her entire red carpet look.

It was a smart move for Hadid to match her lip color to her wide-legged pantsuit, infusing both with an edgy and modern vibe.

In the release, Ta revealed a little secret about Hadid's makeup preferences and shared that she specifically came up this look. He said, "Gigi loves a fresh and natural look, but still glam at the same time. The inspiration for her look this year came from Gigi herself, which I was able to execute and make it my own. She wanted a bronze and beautiful eye with a bold aspect to it which was the red lip."

Here is one of the shades that Ta used.

This is the other. Keep in mind that seeing the shades in person should offer a better perspective. You can grab them online or wait until next month when they are available on a wider scale and mix and match.

Other products that Ta used are listed below and should be available at drugstores!

That's how to snag Gigi Hadid's 2016 Much Music Awards look.