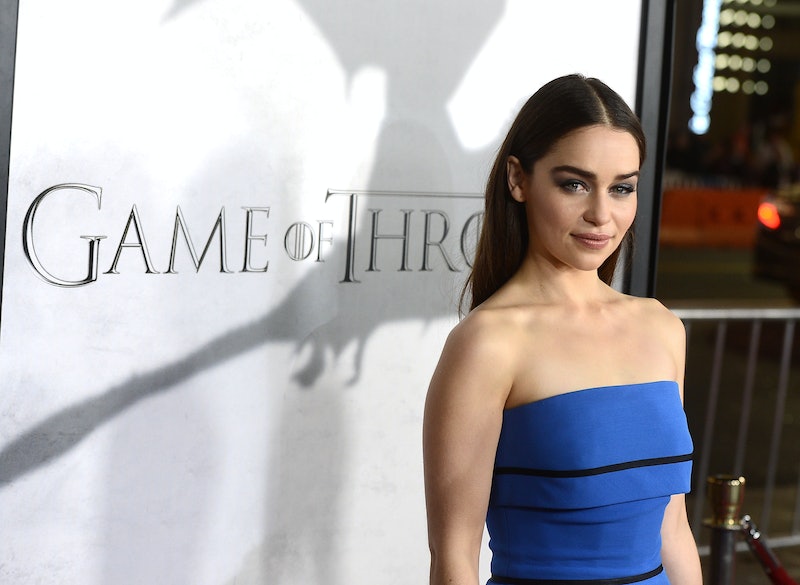 Winter is coming! Well, spring is, but combine the impending Season 4 of Game of Thrones with the spring fashion season, and you've got yourself a recipe for something blissful: a Game of Thrones inspired fashion line. Yes! Now you, too, can wear the threads of the house of your choosing and then get mauled and attacked by people who disagree with you. Yay!

The folks over at Black Milk Clothing, who specialize in sexifying all things gloriously geeky like Adventure Time, are the masterminds behind this new line, which will undoubtedly take season premiere watch parties to whole new level. The line won't officially be available to the public or on their website until 9AM AEST on March 11 (which, FYI is nighttime on March 10 for us over here), but you can browse the designs on Black Milk's Pinterest page til then! Fulfill all your fantasies of being a BAMF like Daenerys Targaryen with shiny dragon's egg leggings, skirts, and super-low-cut V neck bathing suits. Literally get on the Lannister, Stark, Targaryen or Baratheon team with the anachronistic basketball jersey dresses ("shooter dresses," as Black Milk calls them), or don an ice skater dress or t-shirt with your favorite house's insignia. Or just wear a dress that's a skintight map of Westeros! The items look like what would happen if American Apparel landed in Westeros and decided to dress all of your favorite and least favorite characters. It's like a happy medium of how clothed the characters are in the show (totally naked, or heavily dressed in medieval garb)!

The website doesn't say, but I'm pretty sure that a sword, raging contempt, an icy glare, and a rustic brogue do not come with your order. (BUT **FINGERS CROSSED THAT DRAGONS WILL COME WITH MY LEGGINGS.**)

Here's a look at some of the images Black Milk has released.

A map of Westeros! Now you can wear it!

Take a "shot" (er, a stab) if you're supporting the Lannisters!

A T-shirt, for T-shirt wearing people who like the Starks.