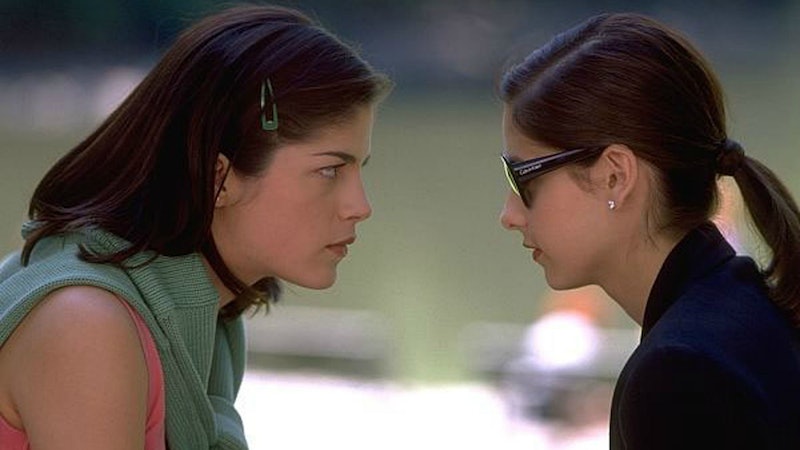 A phenomenal movie kiss is like a fine wine: it just gets better with age. (See: From Here To Eternity from 1953.) The 23 iconic kisses from ‘90s movies below may not that be old in the grand scheme of filmmaking, but they do speak to my sense of nostalgia. Sue me. I like love stories in my movies, regardless of genre. And I spent a lot of my time growing up in this decade picking out and replaying my favorite onscreen kisses from all kinds of films. Some are gross; some are romantic. Others are hilarious and so, so wrong. The best ones are filled with possibility and hope. I’m about to float away just thinking about them.

Keep scrolling to see if your favorite smooches from the ‘90s made the list. I guarantee you’ll see a few of your favorite performers below. Leonardo DiCaprio obviously shows up more than once. George Clooney, Kate Winslet, Sarah Michelle Gellar, Paul Rudd, and Taye Diggs are there too. There’s an alien tongue-kiss, an embrace with a ghost, and even a bit of light (satirical!) incest. Variety is the spice of life, especially when it comes to locking lips. These are the most memorable movie kisses the ‘90s had to offer.

Ghost may take the cake for the most unique kiss on this list. Ever puckered up for a specter?

Cher thinks she knows everything, which is what's so wonderful about the way her own crush on Josh sneaks up on her. It's a first kiss so sweet, I almost forget he used to be her step-brother.

Rose is desperate for a little freedom. She finds it along with roguish steerage passenger Jack at the prow of the doomed ocean liner.

The lead up to this scene is excruciating. The growing sexual tension between Victoria and Paul is symbolized by the frenetic, lusty harvest festival and it all explodes in this wine-drenched kiss. Too, too good.

The first meeting between Romeo Montague and Capulet daughter Juliet is like a dream. It's ruined both fish tanks and Des'ree for me for good.

If you've never been the victim of a too-much-tongue kiss, then I envy you. It feels like this scene looks.

You've got to go through the '90s movie canon with a fine-toothed comb to find many guy-on-guy kisses. There isn't even a clinch in Philadelphia. But Tom Selleck as an out tabloid reporter does lay one on a closeted drama teacher played by Kevin Kline in this small-town comedy.

You know it. You love it. This upside-down kiss between Mary Jane and her masked hero has been parodied everywhere from SNL to The OC.

Waiting for your first kiss can be lonely and humiliating. Less so when that pivotal moment happens on a pitcher's mound in the middle of a sold-out stadium and in the arms of a dashing Michael Vartan.

I'd like to send a case of the finest champagne to the casting director who decided to hire George Clooney and Jennifer Lopez as a criminal and a cop, respectively, who don't let their differences get in the way of their chemistry.

The anticipation is everything in this Richard Linklater romance. You know from the jump that there's a mutual attraction between Jesse and Celine, but they don't rush through getting to know each other. But even a couple of cerebral hipsters can't resist the romance of Amsterdam at sunset.

15. How Stella Got Her Groove Back

Angela Bassett is fire in this movie, so it's no stretch of the imagination to understand why a pretty young thing like Taye Diggs would fall for her.

The Brady feature films are biting satires of the wholesomeness that kept the family sitcom on the air for so long. The second movie has a little fun with rumors about the off-screen relationship between Greg and Marcia (Barry Williams and Maureen McCormick) and introduces some incestuous feelings on the part of those step-siblings.

Look at that technique. I don't think anyone told Christian Bale that he was starring in a movie for kids.

Matt Damon and Minnie Driver share a smooch and a little bit of burger during their charmingly low-key hang.

What's a more '90s first date than a run around a paintball course? Regardless, this messy make-out session is seared in my memory.

Speed sees every other action movie's post-victory embrace and does them one better. Why not make out while you're saving the world?

And I've saved the best for less. A kiss isn't just a kiss. Sometimes it's the attack method of a deadly new species.

This decade ruled on the love scene front. What's your favorite '90 movie kiss?

More like this
Alicia Silverstone Has Recreated An Iconic 'Clueless' Scene
By Frances Stewart
The 'Hocus Pocus' Sequel Finally Has A Release Date & It Makes Total Sense
By Shannon Barbour and Radhika Menon
All The Sneaky Lindsay Lohan Movie Easter Eggs In Her New Ad, Explained
By Stephanie Topacio Long
You’ve Been Singing “Teenage Dirtbag” Wrong This Whole Time
By Bustle UK
Get Even More From Bustle — Sign Up For The Newsletter