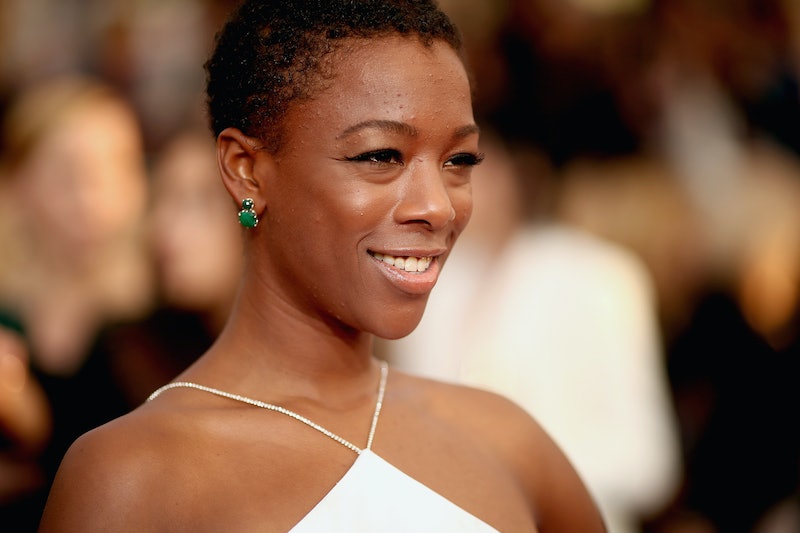 If you are as fond (cough, cough, obsessed) of Samira Wiley's performance as the German-speaking military brat Poussey Washington as I am, then you will be excited to hear this news. The Hollywood Reporter reports that Wiley has joined You're The Worst , a popular FXX show on which she will soon play a reoccurring role. All of the actors in Orange is the New Black deliver some pretty stellar performances season after season, but Wiley's work, and this new role, really prove that her gifts are many and her star is on the rise.

The actress will play Justina, a new character on the third season of the series created by OITNB alum Peter Falk. Justina is therapist to the protagonist, Gretchen (Aya Cash), who, at the end of Season 2, went through a depressive episode. The two will work together to sort out Gretchen's past issues and any new developments. Though Justina has her own problems, like a lethargic boyfriend and a Foursquare addiction (get in line, Justina), she has a talent for being un-phased by Gretchen's pretty standard nonsense and cutting right to the core of the issue. So, you know, she's basically a perfect therapist, and not just because she's Samira Wiley.

According to The Hollywood Reporter, the show creator, Stephen Falk, is very aware of Wiley's imminent rise to stardom from writing her character's backstory on OITNB. He discussing having had a great time working with the actress and thinking of her when writing the character of Justina, "Samira is an incredibly talented, thoughtful and exciting actress... It seemed like kind of a weird choice, given that she’s younger, and on another show, but once it came to mind, the idea of casting anyone else bummed me out. So I didn’t."

More like this
Devi Is Going To Meet A “Smoldering Bad Boy” In ‘Never Have I Ever’ Season 4
By Jack Irvin and Gabrielle Bondi
Netflix Reveals First Look At Wednesday In The 'Addams Family' Spinoff Series
By Bustle Editors
A New 'And Just Like That' Table Read Pic Confirms A Key Character's Return
By Jack Irvin and Grace Wehniainen
On 'The Handmaid’s Tale,' Christine Ko Fights Back
By Gretchen Smail
Get Even More From Bustle — Sign Up For The Newsletter