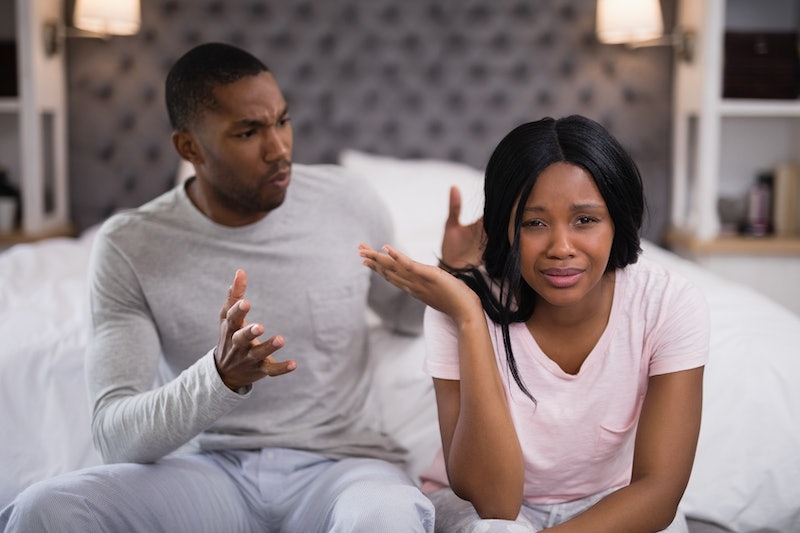 My first relationship began the summer before seventh grade. There were a few weeks of flirting, followed by an AIM exchange in which he confessed he liked me, before he finally popped the question: “Do you want to be my girlfriend?” I answered in the affirmative, and we were official.

Thirteen years later, I often find myself longing for the simplicity of those days. If your experience in the dating game is anything like mine, it seems that no one is certain what he or she wants romantically. If you're unsure whether your partner is in it for the long haul or just a casual-sex-possibly-dating-other-people-on-the-side-no-big-deal type thing, we’ve got some advice. It’s pretty likely that your partner is not ready to commit if he or she:

Often relationships don’t work out, and it’s totally normal to have a few broken partnerships in your past. But, as motivational speaker Annie Ashdown writes in The Huffington Post, if you get the feeling that the person you're dating has left behind them a trail of flings and short-lived relationships, consider that a potential red flag. (And by the way, it's not just guys: Women are just as likely to go from one short-term relationship to the next.) It may be that the object of your affection has a consistent problem with commitment, or even infidelity. Unfortunately, there’s no magic number for how many exes signify a problem (okay, maybe 100 is too many) — you just have to use your own judgment.

Speaking of exes, one way to know for sure that your partner isn’t ready to commit to you is if he/she is still in love with someone else. Dating expert April Beyer says you can tell if your partner has really moved on if he/she has stopped crying, whining, and generally speaking about how his/her ex was hurtful. If the person you're seeing is still reeling from a bad breakup, he/she just may not be ready for a healthy relationship with you. Moreover, it’s possible your partner still has strong feelings for his/her ex, meaning he/she can’t devote full attention to how wonderful you are.

3. Rarely responds to calls or texts.

Dating coach Evan Marc Katz puts it bluntly: “Men reveal themselves in their efforts. Their words don’t mean a thing.” While Katz’s advice may be a bit harsh, the truth is that it’s important to pay attention to your SO’s behavior (no matter their gender). If you notice that he/she has stopped returning phone calls or texts (or doesn’t return them for days), it could be a sign that he/she is seeing other people or just isn’t prioritizing your relationship. Instead of trying to make the partnership work by continuing to send messages, try modeling his/her behavior and only text or call back when he/she initiates contact with you.

I’m not saying that he/she needs to always be the one who invites you out. But it’s best if both partners are equally into spending time with each other. You want to be with someone who a) genuinely wants to see you and b) goes out of his/her way to do so. Basically, as relationship expert Isiah McKimmie writes in Cosmopolitan Australia, in a healthy relationship both parties need to make an effort.

According to dating coach Lisa Shield, we shouldn’t ever expect casual sex to blossom into a full-fledged relationship. You can choose how strictly to follow that advice, but the general idea is that, if you’ve established an arrangement based mostly on fulfilling each other’s sexual needs, it’s unlikely that your partner is suddenly going to be interested in other aspects of your life. Someone who doesn’t bother to ask about your family, friends, or career but is happy to unhook your bra probably isn’t interested in getting serious with you, now or ever. (That doesn’t mean you shouldn’t keep having casual sex — it just means you shouldn't expect it to turn into a relationship.)

6. Doesn’t introduce you to friends or family.

Maybe he/she doesn’t want to bring you to the annual family Thanksgiving potluck because you've only been dating for two weeks. Fair enough. But if months go by and you’ve yet to meet a single one of your partner’s pals or relatives, you have a right to be suspicious. As Dr. Carol Lieberman tells HerCampus readers, the fact that your partner is avoiding these introductions could mean that he/she is embarrassed by something about the relationship or that he/she is dating someone else at the same time. Plus, scientific research backs up the obvious: People who are secretive about relationships tend to be less committed to their partners.

7. Never talks about the future.

Planning the guest list for your wedding on date three is weird. After a few months of dating, though, talking about what the future may hold for you individually and as a couple is appropriate. According to sex coach Amy Levine, planning for the future together is a sign of a blossoming healthy relationship. If your partner is reluctant to make future plans that include you (vacations, visits to see family, etc.), it could be a sign that he/she sees your fling as temporary and isn’t ready to settle into a serious relationship.

The “what are we?” conversation is pretty much universally awkward, but it’s almost always necessary. It’s also a good way to gauge how your partner perceives your relationship. If you already know what you want out of the relationship, state your personal needs clearly and honestly. Lifestyle and relationship expert Terri Trespicio advises Shape readers to bring up the subject once and give your partner a chance to think about it, then bring it up again and see how he/she reacts. If he/she blatantly dodges the question or changes the subject, you can pretty much assume that he/she isn’t ready for the kind of relationship you want and make a decision.

Even the most intelligent people with the very best hearing are prone to overlooking this flapping red flag. Katz reminds us: If your partner tells you during the first week of dating that he/she isn’t looking for anything serious, it means that he/she isn’t looking for anything serious. No matter how nice it is when he/she holds your hand in public, how awesome the sex is, or how much you hope he/she will change his/her mind, chances are that he/she doesn’t want to commit. Trust me: The truth will hurt less if you accept it on day one than if you’re forced to accept it three months later.