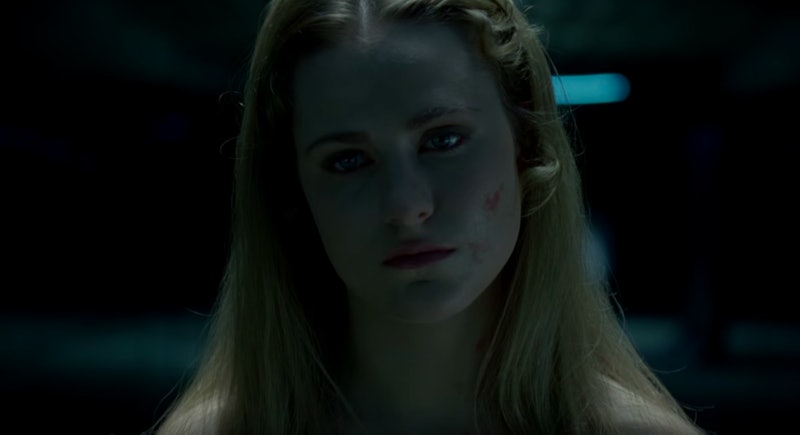 If the latest episode of Game Of Thrones had you reeling, then you'll be glad to know that HBO's upcoming series looks just as enticing as anything going down in King's Landing. A new trailer for HBO's Westworld premiered Sunday before Game Of Thrones, and if you missed it, you may have skipped out on one of the most chilling television trailers to grace the cable network in recent years. The sci-fi series, which is based on the 1973 film of the same name, is set at "the intersection of the near future and the re-imagined past," in a high-tech amusement park where paying guests can pretend to be cowboys and indulge in any desire imaginable, no matter how unsavory. The trailer features plenty of life-like robots and faux-gunslingers, but it's one Shakespearean line, uttered at the end of the trailer by Evan Rachel Wood's character, that might spell doom and gloom for the characters in the upcoming series.

According to Vanity Fair, Wood will portray Dolores Abernathy in the upcoming series, a "farm girl" who finds out that her idyllic life is actually a carefully constructed ruse. Though it's unclear if Dolores is really an artificially intelligent robot, or if she's a flesh-and-blood human, the series does show her in a disturbing circumstance. In the trailer, Dolores sits on a chair in a dark room with blood on her face, and never acknowledges the fly crawling on her face. Is Dolores really in a "dream," as she says in the trailer, or is something more sinister going on? The quote she recites at the end of the trailer — "These violent delights have violent ends" — certainly suggests very bad things are about to go down on Westworld.

The quote from the trailer is from Shakespeare's Romeo & Juliet, and is said by Friar Lawrence, the man who marries the young couple and helps Juliet obtain the poison she uses to fake her death. This line foreshadows the death of the young lovers at their own hands, and generally refers to the complications of lust and passion that can bring about danger. It certainly seems fitting to the plot of Westworld, in which people can indulge in their darkest fantasies. Death and destruction seem imminent on Westworld, and this line could foreshadow the chaos that will ensue.

Westworld could be HBO's most intriguing new show, but unfortunately, we'll have to wait until October to see how these violent delights will meet their violent ends.