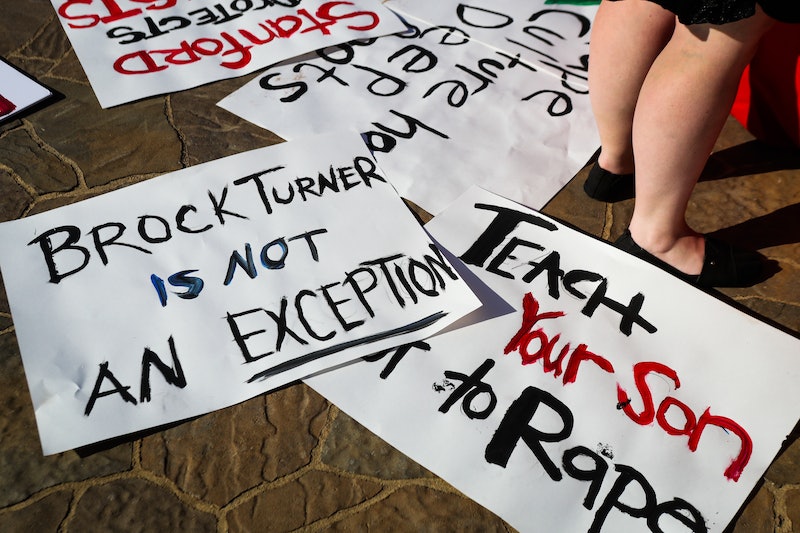 In the fallout since the sentencing in the recent Stanford sexual assault case, it's barely left headlines. These updates on the case of Brock Turner, who was sentenced to a mere six months for raping an unconscious woman outside a Stanford party in early 2015, give a glimpse into Judge Aaron Perksy's motives.

Soon after news of the sentence broke, two letters became public. One was from Turner's father, who said that the six-month sentence is "a steep price to pay for 20 minutes of action." The other was from the victim herself — a 12-page statement read at the sentencing hearing which CNN's Ashleigh Banfield read an excerpt of on air.

Allegations of bias on the part of Judge Persky sparked enough controversy to inspire activists to start a petition calling for Persky's removal, which currently has more than 1.2 million signatures. Countless thinkpieces from rape survivors, legal professionals, and others have circulated. It seems that America might be ready to have a serious conversation about sexual assault. Below are some of the top stories this week to come out of the controversy.

As recently as yesterday, the case was in the news again, but this time it came in the form of pointed Facebook trolling. Facebook page "Brock Turner Family Support" not only discusses the "monumental life-changing and tragic situation" Turner and his family face, but also maligns the woman Turner raped, making posts about how she hasn't come forward and is "cowardly" for not doing so.

The creators behind the page go on to call Turner's confession "coercion" and attack the many dissenting commenters for their "complete disregard for human dignity." Turner's family confirmed that they do not administer the page, adding fuel to the suspicion that it is a trolling endeavor by the likes of those who think it's funny to stir up controversy with over-the-top statements. All the same, it's a disgusting way to rile people up.

Meanwhile, Judge Persky's decision was released, and it revealed the disturbing reasoning behind his sentencing. Last week, The Guardian published the full text of Persky's decision, and the information it contains lends credence to claims of bias. Persky argued that although the victim's heartfelt and harrowing impact statement showed her devastation, his internal dialogue led him to grant Turner probation after six months in state prison:

Is incarceration in state prison the right answer for the poisoning of [Jane’s] life? And trying to balance the factors in the Rules of Court, I conclude that it is not and that justice would best be served, ultimately, with a grant of probation.

He went on to say that he believed Turner experienced remorse, which affected his decision:

Mr. Turner came before us today and said he was genuinely sorry for all the pain that he has caused to [Jane] and her family. And I think that is a genuine feeling of remorse.

Persky also said in his sentencing decision that he believed Turner was as "legally intoxicated" as the defendant claimed, and that although it's not an excuse, it does "affect judgement" and was a factor in Turner's decision to rape the victim. Persky said he believes Turner can and will suffer "collateral consequences" from his felony conviction, which he apparently doesn't wish to exacerbate by sending him to prison any longer. I honestly couldn't stomach reading the entire thing. Do so at your own peril.

Anti-rape advocates are putting up a billboard in the San Francisco Bay area to garner support for the Persky petition movement. UltraViolet, a women's advocacy group which hired a plane to fly over Stanford's graduation last week with a banner reading "Protect survivors, not rapists #PerskyMustGo," is in the news again. This time, it's for a billboard they sponsored with anti-Persky sentiments, which will go up over California's Highway 92.

While UltraViolet's fight against Persky is bold, some are less impressed. Jezebel writer Anna Merlan said that although UltraViolet's aims are admirable, "Fixating on Persky as the problem, to the exclusion of every other factor — and without addressing the culture that creates thousands of Brock Turners and will create thousands more — might not result in the solution we need."

Only time will tell what happens in the Turner case, especially with regards to Judge Persky. This week alone has provided us with ample updates to the case, but more are certainly to come.