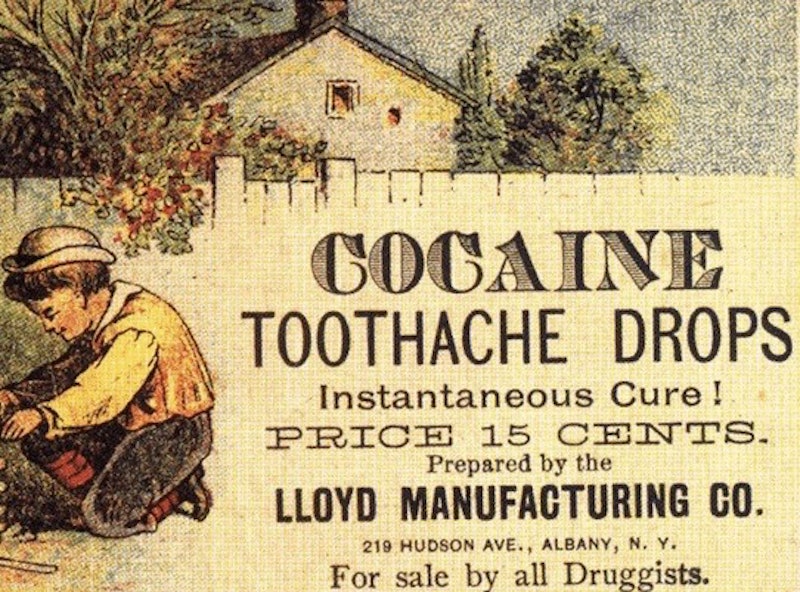 The history of our understanding of many drugs, from cannabis to opium and beyond, has often been a process of discovery: moving from understanding that a certain substance does a certain thing to understanding how, why, and if it's a good idea to have it with dinner every night. Naturally occurring drugs like cannabis have been shown to be part of cultures stretching back tens of thousands of years; it's been found everywhere from ancient Chinese burial mounds to the remains of Viking ships. Man-made substances like cocaine and LSD have had a shorter period in which to accumulate bizarre ideas, practices, and beliefs, but they've more than kept up. There's something about discussing drugs that makes humans inclined to get, well, weird.

Many of the stranger concepts surrounding drugs are ritualistic or medicinal, but some are just plain odd, even if you can understand them in the abstract. Maybe laudanum does sound nicer if it involves ground pearls and gold leaf, and maybe a massive cannabis hot-boxing after 40 days of carrying a dead king around does seem like a good idea.

Here are five of the strangest chapters in the history of humanity's interactions with drugs, and what we decided they could and should do. Cocaine tooth wool, anybody?

1. That Cannabis Was A Way Of Cleansing Yourself After Dragging A Corpse Around

We have to take this with a slight pinch of salt, as it comes from the Roman historian Herodotus, whose Histories are occasionally nonsense; but his reports about the civilization of the Scythians appear to be substantiated by archaeology. According to Herodotus, as part of the funeral rituals of the Scythians, they'd burn cannabis seeds in a kind of vapor bath:

"...when, therefore, the Scythians have taken some seed of this hemp, they creep under the cloths and put the seeds on the red hot stones; but this being put on smokes, and produces such a steam, that no Grecian vapour-bath would surpass it. The Scythians, transported by the vapour, shout aloud."

But they didn't earn the right to this shouting bath time easily. According to Professor James Butrica, a classics specialist, the Scythians did this rite only after a deeply exhausting funeral procession. "Instead of a wake, they put the corpse of the deceased into a wagon," Butrica explains, "and for forty days took it on visits to the homes of friends and kin, where it was served at table along with the other guests. It was at the end of this period of mourning that men resorted to the hemp-baths as a form of cleansing." This may sound like moonshine, but Archaeology Magazine reported earlier this month that a Scythian funeral mound was found to contain many small dishes with opium and cannabis remnants, and that archaeologists believed that the tiny dishes were worn around the neck constantly for ritual purposes.

2. That Hallucination-Causing Ointments Were Behind Satanic Witches

European paranoia about witches reached its peak in the late 1400s and early 1500s with the publication of a book called the Malleus Maleficarum, or Hammer Of Witches, which alleged that witches were servants of the Devil and severely dangerous. Others, however, thought that might not be the case, or at least not directly: they thought the experiences of witches might be due to hallucinogenic ointments.

The most famous disbeliever was a doctor, Andres de Laguna, who wrote in 1529 that the house of an executed witch and wizard contained a "certain green ointment... composed of soporific herbs such as hemlock, nightshade, henbane, and mandrake." Keen to see what it did, he promptly covered a convenient woman (the executioner's wife, actually) all over with it, and observed what happened. Apparently she slept for 36 hours, and woke up declaring that she'd had a hugely pleasant experience, including sleeping with somebody far cuter than her husband. Laguna and other people who'd observed ointments as part of witching preparations didn't comment on whether they thought the ointments were devilish, or if the "witches" were just making it all up; but they certainly added a different tone to the condemnation of witches as straightforward Devil-worshippers.

3. That Opium Was Better With Crushed Pearls, Saffron, And Gold Leaf

If you know a small bit about the history of opium and opioids in Western history, you'll know that the derivative laudanum was wildly popular in the Victorian era, attracting everybody from Samuel Taylor Coleridge (Kubla Khan was probably written in a laudanum-induced haze) to nurses who gave it to teething, upset babies. But the origins of laudanum actually date to centuries before the Victorian era, and it used to be considerably fancier.

It's speculated (though we don't have proof) that the first originator of laudanum, a tincture of opium prepared by dissolving pure opium in water, was the 16th century Swiss thinker Paracelsus, who contributed to our understanding of chemistry and other disciplines; (he came up with the word "zinc" and the idea of the unconscious, for instance). He was also a strong believer in alchemy, though, which attempted to transform matter into other substances, and it may have been in this capacity that he came up with laudanum. His original recipe seems to have been extremely elaborate: it apparently had amber, musk, crushed pearls, and gold leaf alongside the opium itself. Laudanum in its first introduction to the English market was similarly stuffed with irrelevant items, like saffron and cloves.

4. That Cocaine Wool Was An Excellent Remedy For A Toothache

I've written about the bizarre and twisted history of cocaine elsewhere, but the pertinent thing about it is that, like with other serious drugs (heroin, for instance), it was originally marketed as a completely innocent cure-all and pain reliever before science caught up to the actual damage of serious usage. Part of the problem was that medical regulation didn't exist, so it was perfectly acceptable for cranks to market cocaine wine, for instance, as curing "headache, gastralgia, anaemia, neuralgia, sea sickness, etc." — and as appropriate for children.

Cocaine's real popularity was due to its genuine pain-suppressant effects; rubbing it on gums in particular was known to be a way to kill tooth pain. Some enterprising soul in around 1900 marketed "cocaine wool" to be put in the cavities of an upset tooth, which would undoubtedly have worked but perhaps wasn't the wisest way to move forward.

5. That LSD Was A Truth Serum That Could Be Used For Warfare

This is one of the most astonishing and bizarre bits of American history in general, let alone drug history: the period from 1953 to 1964 in which the CIA was seriously investigating whether LSD, the hallucinogenic substance of immense power, could be used as a kind of biochemical warfare, to make prisoners or enemies of the state tell the truth under duress or become "sleeper agents". The entire process was called Project MKUltra, and was both unbelievable and brutal: the CIA used coercion, secrecy, and blackmail to round up test subjects, including brothel customers, prostitutes, terminal cancer patients, and prisoners, to test LSD without their consent. Subjects also included CIA employees and soldiers.

The purpose of MKUltra was hugely diverse: a Senate committee hearing about it in 1977 was astonished to find out that the CIA wanted to achieve "discovery of the following materials and methods:

The tests were unsuccessful, and in some cases catastrophic: some test subjects became permanently debilitated, and one, a scientist, died. The project was ended and the records declared destroyed by the CIA director in 1973, but it came to light when people started poking into government programs in the wake of Watergate.