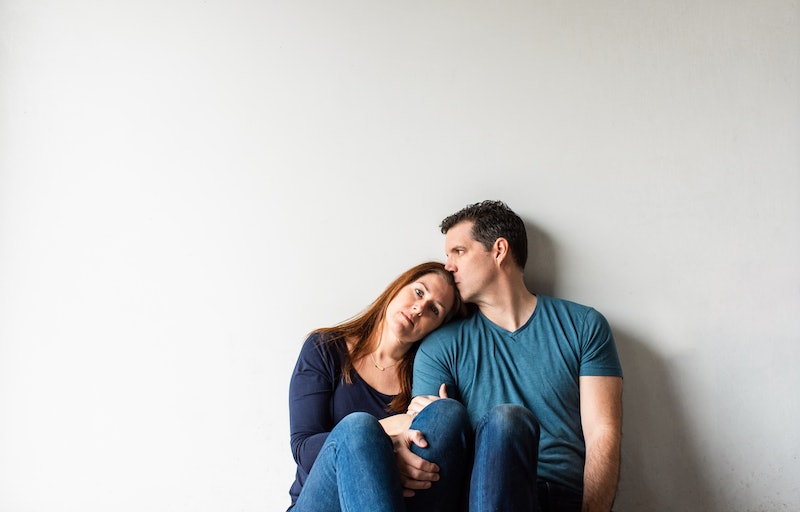 We all know the maxim that "good communication is the key to a good relationship," and it's more than just empty words; a survey in 2013 found that poor communication is one of the most common reasons for divorce in America. But what does "communicating well" actually look like? Getting through an argument without throwing things? Constantly compromising? Never raising your voice at one another and avoiding fights altogether? As it turns out, the psychology of good communication paints it as an active and skilled practice. We don't just come out of the womb knowing how to deal properly with another person's feelings and opinions; we have to learn — often in conjunction with our partners.

There are certain behaviors, from posture to reaction, that signify that you know how to talk to your partner properly, with respect and clarity. If you seem to constantly get into screaming matches, hurt each other's feelings by accident, or end up going through the same frustrating problems over and over, you may be dealing with a communication issue, and it could be worth you both sitting down with this article and working out what to do to move forward so that you two can attempt to use more positive and effective communication strategies. This does not give you permission to silently dump the issue on your partner's desk, though; a key thing to remember about communication problems in a relationship is that they involve both of you.

Here are seven signs that you're communicating effectively with your romantic partner (and probably with everybody else in your life, from your boss to your mail carrier).

You may not realize that you do this, but you'd definitely pick up on it if your partner doesn't. Active listening is a combination of different approaches that indicate to the speaker that you are engaged with what they're saying, from vocal cues ("yes, uh-huh, I hear you") to physical signals of interest and complete attention. Body language is an important part of active listening: an active listener doesn't cross their arms or turn their body away from the speaker. They also don't avoid eye contact, check their phone or give "dismissal cues" like eye-rolling or huffing.

London Psychotherapy points out that one of the most potent demonstrations of active listening is mirroring the body language of the speaker, which gives a deep indication that you're interested and engaged. Our mirror neurons encourage us to mimic the subjects of our attention from a very young age, and most of us understand a mimicked posture or action as a sign of bonding and engagement. Other signs of active listening include summarizing the thoughts of your partner back at them and checking if you've got an interpretation right.

2. You Separate The Issue From The Person

One of Psychology Today's biggest signs of poor communicative styles in a relationship is the inability to express the difference between an issue and a person. This basically means that you condemn your partner personally, rather than the particular action, problem or statement you're having an issue with, when you two are having a dispute. If you can separate the issue and the person, you can say things like "You're a deeply considerate person, but calling my mother an idiot wasn't very considerate," instead of "You are an a**hole because you forgot to chop the carrots." Good communicators can express disappointment, anger and other negative emotions about specific events without generalizing into condemnation of a character in general.

The difference between a sentence like "You've done something wrong" and "I feel hurt by what you did" is, in communication terms, pretty substantial. It's referred to in psychology as the distinction between "I" statements and "you" statements: "you" statements are accusatory, blaming and attacking, while "I" statements are about discussing how you yourself feel. John Amodeo and Kris Wentworth, in Self-Revealing Communication: A Vital Bridge Between Two Worlds, explain that "I" statements "disclose our experience without attacking others, invalidating their feelings, or criticizing them for not meeting our needs or conforming to our point of view." "I" statements create a sensation of vulnerability, of opening ourselves up to our partners, and are preferable to "you" statements when you're trying to resolve a conflict.

4. Your Primary Intention Is Always To Be Kind

Communication styles in relationships can differ, but the one signal that things are not going according to plan is a deviation from mutual respect into contempt, fury or disregard for the other person's feelings. Contempt, as I've discussed before, has been proven by psychological studies to be one of the worst communication problems in relationships, and indicates they're likely not to be successful; but anything that invalidates or belittles the other person's responses and feelings is likely a bad idea.

The most successful relationships, according to a 2014 collection of studies, are both deeply kind (even while arguing) and generous (giving to partners even when you're tired and want to stop talking). If you can keep hold of the desire to be kind to your partner even when they're being utterly infuriating, you're communicating well.

5. You Look For Methods Of Communication That Work For Both Of You

There are many ways to interpret and define different communication styles. One method that is particularly popular in corporate circles, according to Forbes, is dividing communication styles into four categories: Analytic, Intuitive, Functional and Personal. Even if you don't adhere to specific definitions, though, it's easy to notice that people can have different methods of discussing and understanding issues, from a sensitivity toward certain words to a focus on facts and logic.

If you're communicating effectively, you know these particular idiosyncrasies well and attempt to find a "common language" where you're both able to get what you want. If you're in a relationship with a person who finds critical words difficult to deal with, for instance, you'll both work to figure out how to discuss issues without triggering those feelings.

The phenomenon of passive aggression — which the Counselling Directory defines as "non-verbal aggression that manifests in negative behavior," from speech to body language — can have a lot of origins. Perhaps the person believes that they shouldn't "make a fuss" but still wants to make their feelings known; perhaps they think their partner should be able to work out the difficulty without extra help; or perhaps they find it difficult to express anger or frustration in a healthy way. Whatever the story, passive aggression is a massive barrier to correct communication, as it prevents the proper articulation of feelings and creates an ambiguous atmosphere that resists resolution. Partners who avoid passive aggression like the plague, even when the temptation to say "I'M FINE" is extremely strong, know what they're doing.

Life coach Deb Dutilh, discussing relationship communication patterns in the Huffington Post, pinpointed one big problem that can hinder successful discussion: inauthenticity. To Dutilh, this category of poor communication means responses that don't actually line up with our true feelings, including agreeing when we want to disagree, feigning ignorance, or being contrary in order to pick a fight. In a relationship with good communication, if somebody asks you what's wrong, you tell them, and if they want your opinion, you give it. There's a massive difference between couching your opinion in a way that's helpful and kind, and not actually giving it at all.

"When we systematically accept things against our will, shut down to keep the peace and rationalize why that’s okay, we set ourselves up for resentment and anger down the line," Dutilh told the Huffington Post. Couples with decent communication aren't afraid to disagree, have fights or express opinions — but their honesty doesn't come at the price of their partner's feelings.