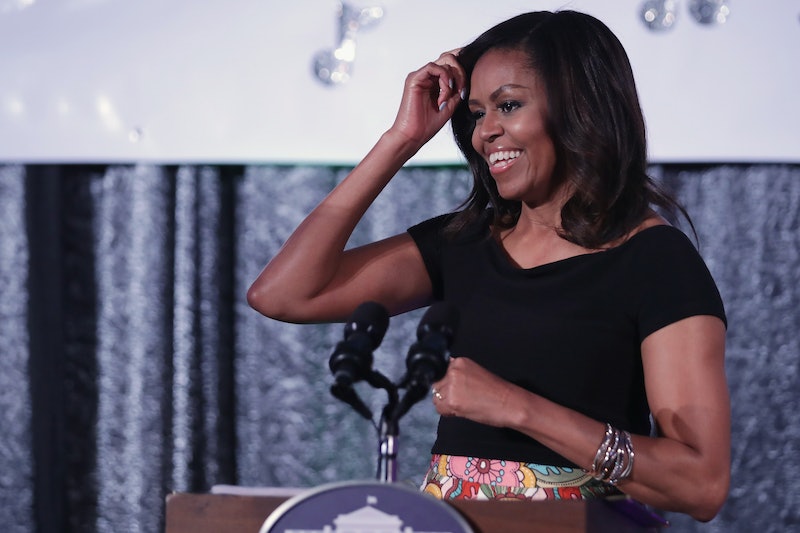 As if she needed another reason to show us how great she is, Michelle Obama is on Snapchat and she's already killing the selfie game. FLOTUS reached a new level of cool on Tuesday, June 21, when she announced that she had finally joined Snapchat, and she wasted no time using emoji and geolocation tags in her snaps.

FLOTUS' Press Secretary Joanna Rosholm told The Verge that Snapchat is one more tool in Obama's box for engaging with young people. The White House has operated a Snapchat account since January to offer a behind-the-scenes look at the administration's doings. But many First Lady fans will undoubtedly be thrilled by the opportunity to get her unique perspective through the social media platform, not only to learn more about White House happenings, but her personal initiatives as well. She'll be offering Snapchat users a public window into her daily life at the White House, events she and her husband attend for the remainder of his time in office, and her personal projects.

Michelle Obama is active on many social media platforms, including Twitter, Instagram, and Facebook, which she uses to connect young people to the Washington world and to promote the issues she cares about, including healthy eating, exercise, and veterans' aid. In an interview with The Verge earlier this year, the First Lady explained why she's such an avid user of social media:

[It] bypasses the middle man. People can get to know me directly. They can see that I'm kind of silly sometimes, that I care. They can feel the passion, [and] they don't have to have it filtered through another source. And young people in particular like that.

Obama's entrance into the Snapchat world comes one week ahead of her trip to Africa and Europe, which she'll take as part of her Let Girls Learn initiative, which promotes access to education for girls around the world. She will travel to Spain, Morocco, and Liberia to meet with young girls, The Verge reported, and will be accompanied by actors Meryl Streep and Freida Pinto. You can walk through Obama's trip with her as she updates her Snapchat throughout her travels.

Based on her first day's activity on Snapchat, Obama's committed to keeping it fun. She updated her account with pictures of her shooting a scene for The Ellen Show and hanging out with Carpool Karaoke's James Corden.

Obama's easy to find on Snapchat with the simple handle "michelleobama." It's one more way you can keep up with FLOTUS' daily life and her many initiatives — and, of course, her next fun, silly moment.