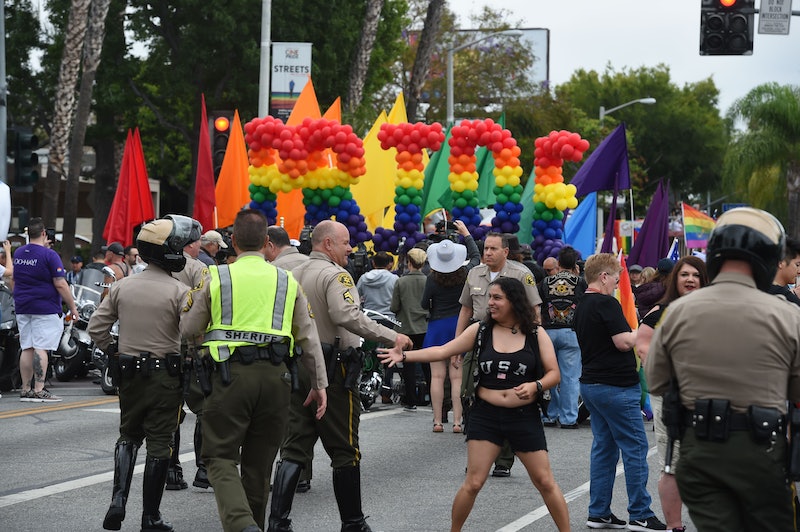 I haven't been to a gay bar in a while, and certainly not since the Orlando tragedy shook the ground beneath us and dropped us to our knees. But I'm supposed to go to a gay bar in the West Village tonight to meet up with an old friend who was visiting from out of town, a friend who I used to go to gay bars with. And I'm terrified.

I've been to this bar so many times over the past 17 years that all I have to do is close my eyes to smell its mix of cheap vodka and recycled air filled with hot, gay breath. I have flashes of total abandon, laughing with friends I shared everything with until tears slide down my cheeks, makeout sessions that careen into one-night stands, the feeling of absolute invincibility. Anything was possible in those days, or so it felt. Every night out meant I might have the hottest one-night stand of my life, or meet my soul mate, or rub shoulders with the person who would launch my career.

I am heartbroken to shift from those memories to what I'm feeling now. All I can feel is fear. Rather than thinking about reconnecting with old friends to make new memories tonight, all I can think about is how there's no back door in that bar. There's no exit aside from the front entrance. All I can do is conjure up my memory of every nook and cranny in that little bar to coordinate in my mind’s eye where I should sit so that I can see the front door at all times. I’m picturing whether there’s a space in the bar where I can position myself and my social group so that we have a fighting chance to hide if someone comes in and attacks us.

I waved rainbow flags high into the sky at pride marches and kissed my girlfriends on crowded train cars and city streets. I spoke up when I heard someone say something ignorant and wielded my mighty pen to change hearts and minds ... Still, I've never felt more frightened than I do now.

I've been an out-and-proud lesbian for nearly two decades. I came out in a time when there was no internet to speak of where I could connect with queer people and see myself reflected. There were no out celebrities who hadn't paid the price for being honest about who they were. There were no laws that recognized our marriages, our parental rights, our right to not get fired or kicked out of somewhere because of our sexuality. I lived through the tears and vigils when Matthew Shepard was brutally murdered and when hate crime after hate crime went silent into the night without mainstream media covering it. I marched in the streets when teen after teen took their life or had it taken from them far too early, all because they were queer and weren’t accepted.

And yet I walked proudly down the street with my gay shirts and my fingers entwined with lovers and in big gaggles of queers who were loud and happy, even if the undertone was one of trepidation. I waved rainbow flags high into the sky at pride marches and kissed my girlfriends on crowded train cars and city streets. I spoke up when I heard someone say something ignorant and wielded my mighty pen to change hearts and minds. If anything, people would probably label me bold and brazen, and maybe even risky when it comes to showcasing my queerness.

Still, I've never felt more frightened than I do now. Perhaps that happens as you get older — the immortality of youth fades into a dull acknowledgement that it won’t all be OK, that bad things happen all the time and could happen to you, that one day you will die. If it were any other night in any week before this one, though, I wouldn't be scared about meeting my friends at the gay bar like I am about tonight.

I know I’m not supposed to be this afraid. I know I’m supposed to stand tall and be bold and be prouder than ever. Terrorists commit heinous acts to instill terror, and that’s exactly what I know I shouldn’t succumb to, because it means they have won. But I don’t know how to walk into that bar tonight and not carry the terror with me that I’ve felt since that Sunday morning. I don’t know how to shake the fear that it’s not over, that the terror is only just getting started. Or perhaps what scares me the most is that the veneer has finally been lifted, and I realize that I was never really safe, and should have been terrified all along.